Worlds 2022 Win Probabilities: Our Experts React to the Factor.gg Model

Will the LPL win Worlds again? Does T1 have the NA Magic to win the third Worlds in NA? Can a Western Team make a run and shock the world? Will a minor region be able to come out of groups? Worlds is the greatest time of year in esports and there are tons of storylines to follow. Factor's proprietary algorithm calculate probabilities for all teams and their chances to make each stage. This model will run again at the end of each stage for the most up to date and accurate predictions for which team has the best chance to win Worlds. At the start of the Play-In Stage, we asked our writers to react to Factor's predictions.

Factor.gg's Probabilities For Which Team Has The Best Chance To Win Worlds

Pre-Playin-s Probabilities: (for the most up to date probabilities - visit https://www.factor.gg/worlds-2022) 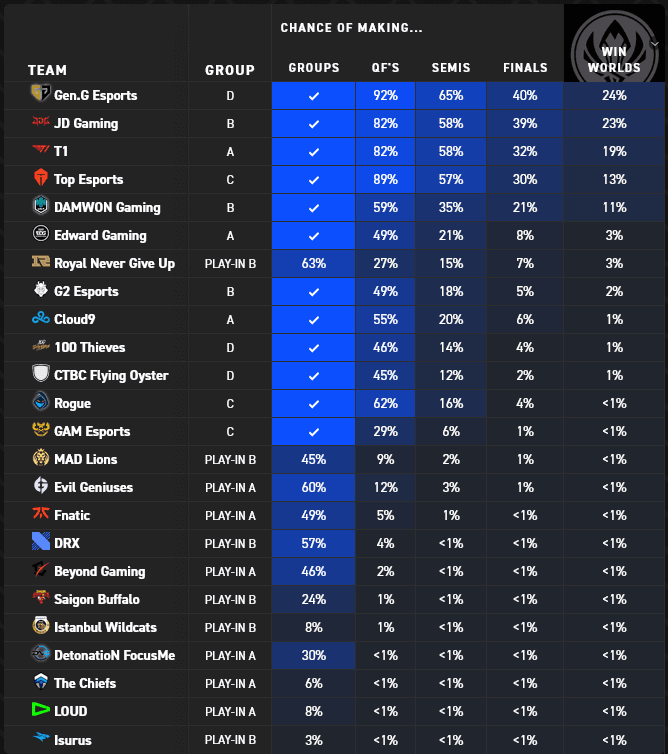 Nick Geracie: Very surprised to see T1 ahead of Top Esports in likelihood of winning Worlds. I don’t know if I’d have MAD ahead of EG either, but that’s a bit less of a gap than T1 and TES. I also think DRX is a couple of spots too low.

Tom Matthiesen: It’s surprising to see Rogue below G2 Esports, while Rogue beat G2 dominantly and G2 appears to be in a more difficult group. Gen.G and JDG as top picks make a lot of sense, though would’ve expected JDG to be #1 due to the strength of the LPL as a region.

Matt Knipfer: I honestly think these are all great predictions. The biggest surprise for me is seeing that Royal Never Give Up has over three times the odds of winning it all as MAD Lions, is seven slots ahead in ordered probability, and still only has a 63% chance of getting into groups. But, that has nothing to do with Factor so much as a stacked competition and challenging tournament structure. This is a tight year.

-Extremely low chance of winning for other regions/teams

What teams make the Worlds Finals and what is the series score?

Matt Knipfer: I’m a cold statistician. I’m sticking to the base case. GenG vs JDG 3-2.

Who is your dark horse pick?

Tom Matthiesen: RNG. They looked shaky in the LPL Summer Split but they’ll have the Play-In Stage to set their heads straight. Let’s not forget that they won MSI this year!

Matt Knipfer: Deep down, we all love a Cinderella story. An underdog that succeeds beyond one’s wildest imagination can spark hope and joy into any onlooker. It’s food for the soul.

That’s why in my heart of hearts I’m rooting for Saigon Buffalo! Every night I dream of that team storming through the final Nexus, making history, and hoisting that trophy over their heads as Twitch chat goes nuts!

Alberto 'Crumbz' Rengifo: T1. They've beaten GENG before and had an impeccable spring. Bring back some of that magic and they can easily win it all.