What is Duo Proximity and Why Does it Matter?

Everyone has played a game of League of Legends where their Support got tilted and perma roamed. Ironically, this is a basis for one of the most useful stats in League, Duo Proximity (DP). DP is defined by the percentage of time a Bot Laner and Support are within 1000 range of each other between the 3-15 minute mark. Much like Jungle Proximity, there is essentially an invisible line being drawn between the Bot Lane duo at all times via birds eye view. Every tick that this line is under 1000 range counts towards Duo Proximity. Theoretically, if a Support stayed within 1000 range of their Bot Laner in that 3 to 15 minute early game window their DP would be 100%. Furthermore, the Support is the only position in the game that has DP.

But why is DP only calculated between 3-15 minutes? The answer is really simple. If sitting in the tribush for a minute counted, the stat would be inflated. Also, the support will always be there for the first three waves and counting them towards DP would just inflate the stats further. After a Support gets level 2 or 3 from these waves, it unlocks their ability to roam which is the basis of DP. Furthermore, after the laning phase breaks down post 15 minutes, inflating DP with a NARAM would also prove fruitless. These barriers exist to try and make DP as accurate and useful as possible.

Speaking of uses though, what are they? What can one gather from DP? One of the best uses is to see how much help a Bot Laner is getting. The Support in most games has two options, to either stay Bot and try to dominate the lane or to roam and help out the other lanes. Team A might think dominating lane is more important and is willing to keep their support down there. On the other hand, Team B might think that helping out their Mid or Top is the way to win the game.

Take for example a recent match in the LCS Playoffs between Team Liquid and 100 Thieves. 100T’s Huhi was on Leona while TL’s CoreJJ was on Tahm Kench. Leona is one of the best roaming champions in the game, but Kench, well, not so much. As a result, we see Huhi took advantage of this and roamed a ton with a DP of only 29%. CoreJJ attempted to match it, but he had a DP of 57%. Now compare these two numbers to the average DP for these players throughout the year. 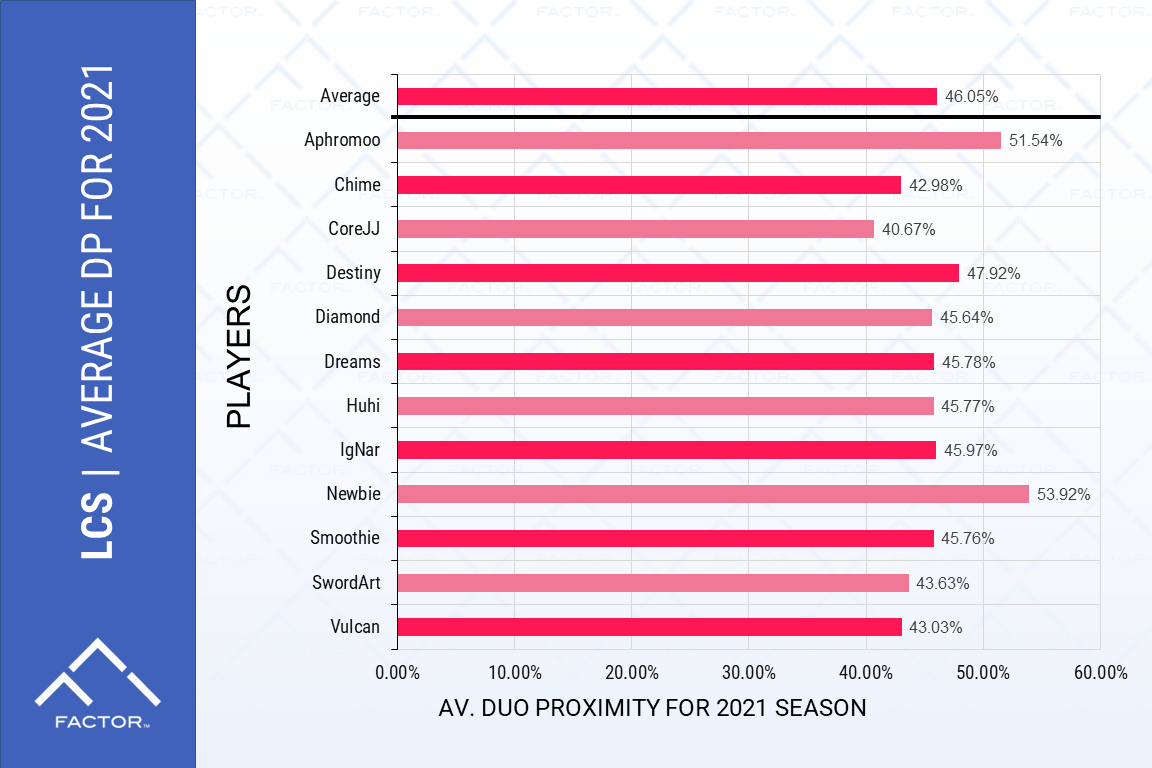 CoreJJ averaged a DP of 40.67% while Huhi averaged 45.77%. CoreJJ was near his ADC about 40% more than average due to the matchup. Huhi on the hand was near his ADC about 36% less than average as he tried to take advantage of CoreJJ’s immobility. While this game is certainly an outlier for both of these players, it showed two extreme examples of how DP is calculated and that matchup is incredibly important.

DP is also becoming more and more important as the meta has shifted over time. With the meta in the last two years being tanky and engage characters like Nautilus, Rell and Leona becoming popular picks, we have seen less DP. A Nautilus backing at level 3 or 4 and ganking Top Lane has become standard. Compare this to the Ardent Censor meta. If one played Kog Lulu, a lane literally designed for them to always be together, DP is going to be way higher. Until the meta shifts back to enchanters being viable on the competitive stage in a big way, DP numbers are going to probably stay around where they are now, possibly going down more.

There are a few other factors that should be noted about DP. One way to decrease DP percentage besides roaming is warding. While there is some overlap in the two, going for deep wards takes a lot of time. Deaths also play a factor. The Support obviously can not be near the ADC if either one is dead. Finally, there are some champions that can cause two extreme ends of DP. We saw this earlier with CoreJJ’s Tahm Kench, but another great example is Bard. Bard is a unique champion that has his chimes scattered across the map that need to be picked up. Now ideally, the Support also roams or wards while doing this, but it is worth mentioning.

All in all, Duo Proximity is a great way to learn more about the style of the Bot Lane duo and Factor is the only place on the internet to get DP stats.

Larssen reflects on LEC championship and looks forward to Worlds 2022: “I'm very happy with our group.”

Do LoL pro players get every League skin and emote?