The phrase “Playoff Perkz” has been thrown around so much during Cloud9’s playoff run. From Reddit analysts to professional casters, people in the League community seem to believe that Perkz performs better when the results matter most, hence the phrase “Playoff Perkz” was coined. This notion of a playoff buff, or a significant performance increase during playoffs, isn’t new – in fact, this was typically a concept associated with Team SoloMid back in the day. Today, the question stands: was Perkz actually playing better in the playoffs than he was during the regular season?

There are a few stats that many analysts use to determine performance in a match, these being:

The first two are metrics commonly used to determine how well players were laning since 10 minutes often describes the early game where mid laners are typically 1v1 against their opponents (with intervention from junglers every now and then). Having a higher gold or experience difference can usually indicate better performance given that the winning match up will have more CS, kills, or turret plates.

We also have the ability to utilize the POWR rating system to determine player ratings at the end of the match for an encompassing metric of player performance.

To understand how we’ll be interpreting the results, we’ll need at least a basic understanding of hypothesis testing, specifically permutation tests:

Now that we got a bunch of definitions out of the way, let’s get started with constructing our null and alternative hypotheses, and set a critical value that will allow us to reject the null hypothesis.

Well, the results have shot down the narrative that Perkz actually performs better during playoffs - we have failed to reject the null hypothesis in all but one performance metric. Gold difference at 10 minutes was tested to be significant, which is a bit unfortunate since this means that Regular-Season Perkz outperformed Playoff Perkz by about 209 gold at 10 minutes. 209 gold is comparable to a cannon minion wave and some change. Given that the experience difference at 10 minutes isn’t significant, we can assume that Perkz was probably losing lane and forced to give up last hits more during the Playoffs. Practically, 209 gold gets you a couple control wards and a potion. While wards definitely save lives, they wouldn’t contribute much to the hype around “Playoff Perkz”. At my discretion, I would conclude that 209 gold is not practically significant. Thus, all five differences have been deemed not significant.

So what does this mean? Can we finally stop throwing around the phrase “Playoff Buff” or “Playoff Perkz”? This is where I’d like to inject some of my own opinions.

Maybe we can kill the notion that playoff buffs equate to a boost in performance. I think one narrative that hasn’t been focused on is that his playoff numbers aren’t significantly different from his regular season games. Let’s dissect that statement a little bit - what do I mean by that and who cares?

Well the regular season is evenly distributed with all teams in the LCS - from the bottom of the barrel in CLG, to the current champions, 100 Thieves. However, Cloud9’s playoff runs are filled with multiple games against top teams such as Evil Geniuses, Team SoloMid, Team Liquid, and 100 Thieves. There’s no luxury in stat-padding by dumpstering on CLG or FlyQuest in the playoffs. Yet, the hypothesis test showed that there’s no significant difference in how he’s performing. Maybe instead of pushing the narrative that “Playoff Perkz” is on another level (because setting unreasonable or false expectations is ultimately detrimental to the player), we should be considering the fact that Perkz doesn’t really falter when the pressure is high: this guy is just consistently good. His POWR rankings place him in the top ten LCS players: 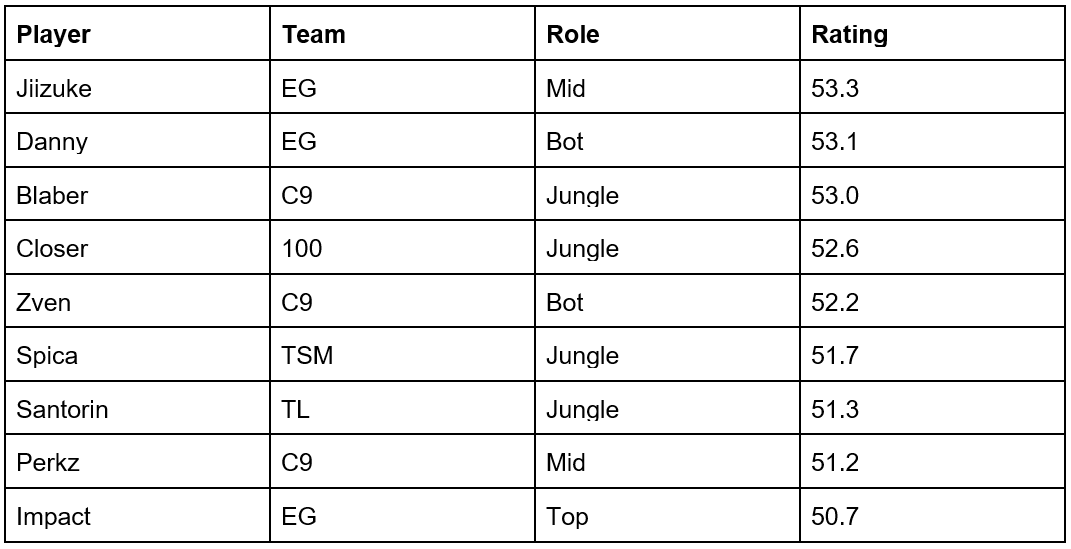 And subsequently, the 2nd highest rated mid laner in the LCS too:

Perkz might not be as good as everyone is hyping him up to be during the playoffs, but that’s not really a problem when he’s already really good at this game.