The MVP and All-Pro awards given out at the end of each split are subjective. Let’s compare what the numbers say vs what the “experts” say.

The LCS award voting system has had its fair share of controversies, to say the least, with its issues of troll voting. For those who aren’t aware of the LCS award voting process: the LCS broadcast team, third-party media, and pro team representatives are sent ballots to voice who they think should be awarded an All-Pro team position, an MVP, Coach, or Rookie of the Split award. These ballots are tallied up and awards are given out to those with the most votes. Because these ballots are made public by Riot Games, fans have been able to find instances of troll voting. This has resulted in multiple splits where finalists for the awards are of questionable choices, and other splits where it has been plagued with ballot box stuffing. Is there a more objective approach to the voting system?

The difficulty of the task comes from the fact that there has been no universal metric that can apply to all players. Damage dealt wouldn’t apply to supports, vision control wouldn’t apply to carries, damage mitigated wouldn’t apply to carry top laners – the list goes on. That’s the problem POWR solves – a derived player rating framework that tracks contribution toward a team win. It’s not the perfect solution to a problem that will inevitably lead you down a rabbit hole of college theses, but neither is the current voting system. So let’s see how the LCS Spring Split All-Pro Teams would look if POWR was taken into account. 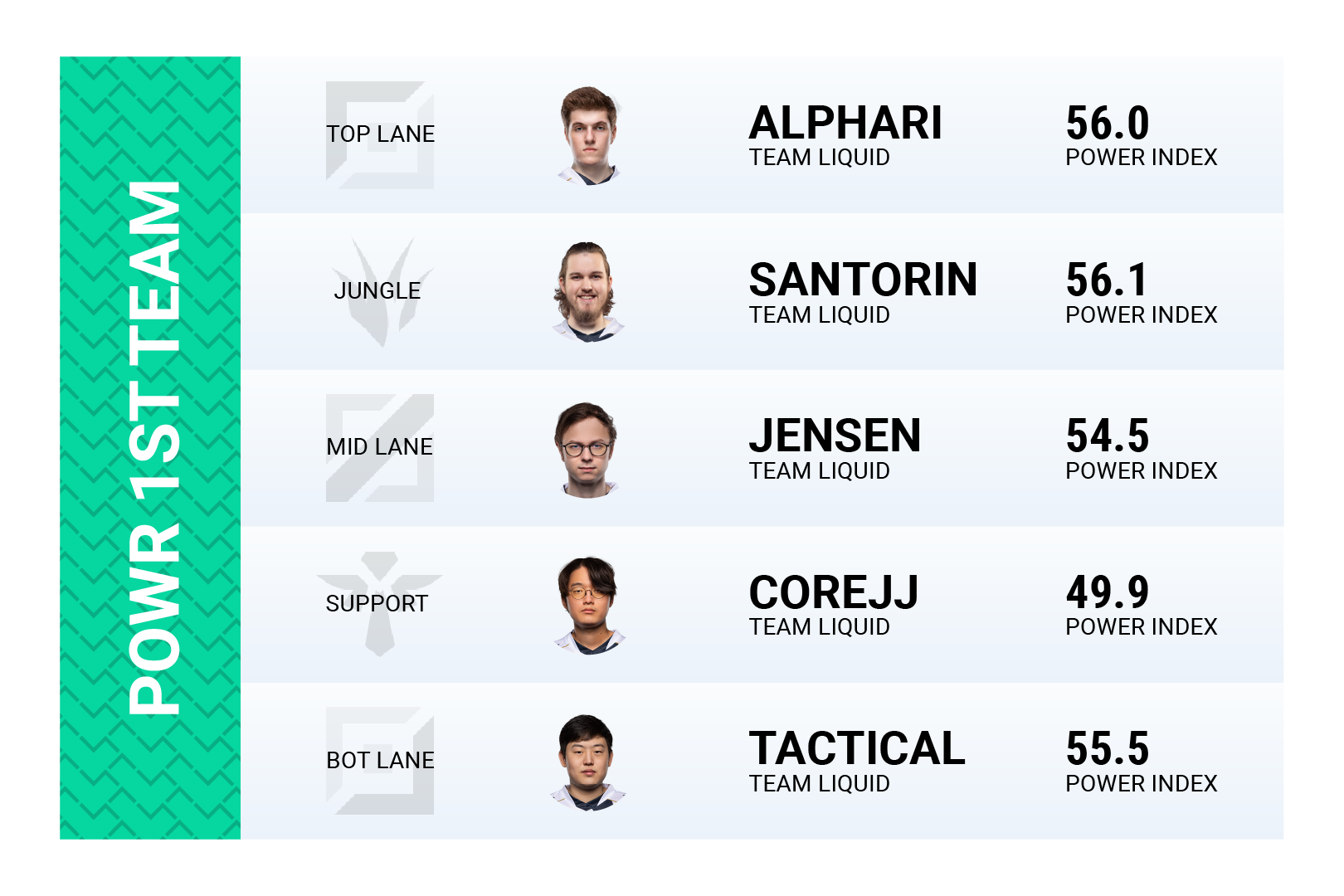 Admittedly, this was a bit surprising given that Team Liquid are overall third in the regular season, and tied with second place, Team SoloMid, in terms of win-loss. However, upon reviewing match histories, Team Liquid is the only team to not have more than one losing matchup, which is unfortunately against the team they tied with: Team SoloMid. In comparison to the higher ranking teams - Cloud9, doesn’t have winning records against TSM (2nd place) and Team Liquid (3rd place), while TSM has losing records to Dignitas (5th place) and FlyQuest (8th place). To a degree, this justifies a few of the positions. In comparison to the actual All-Pro Team: 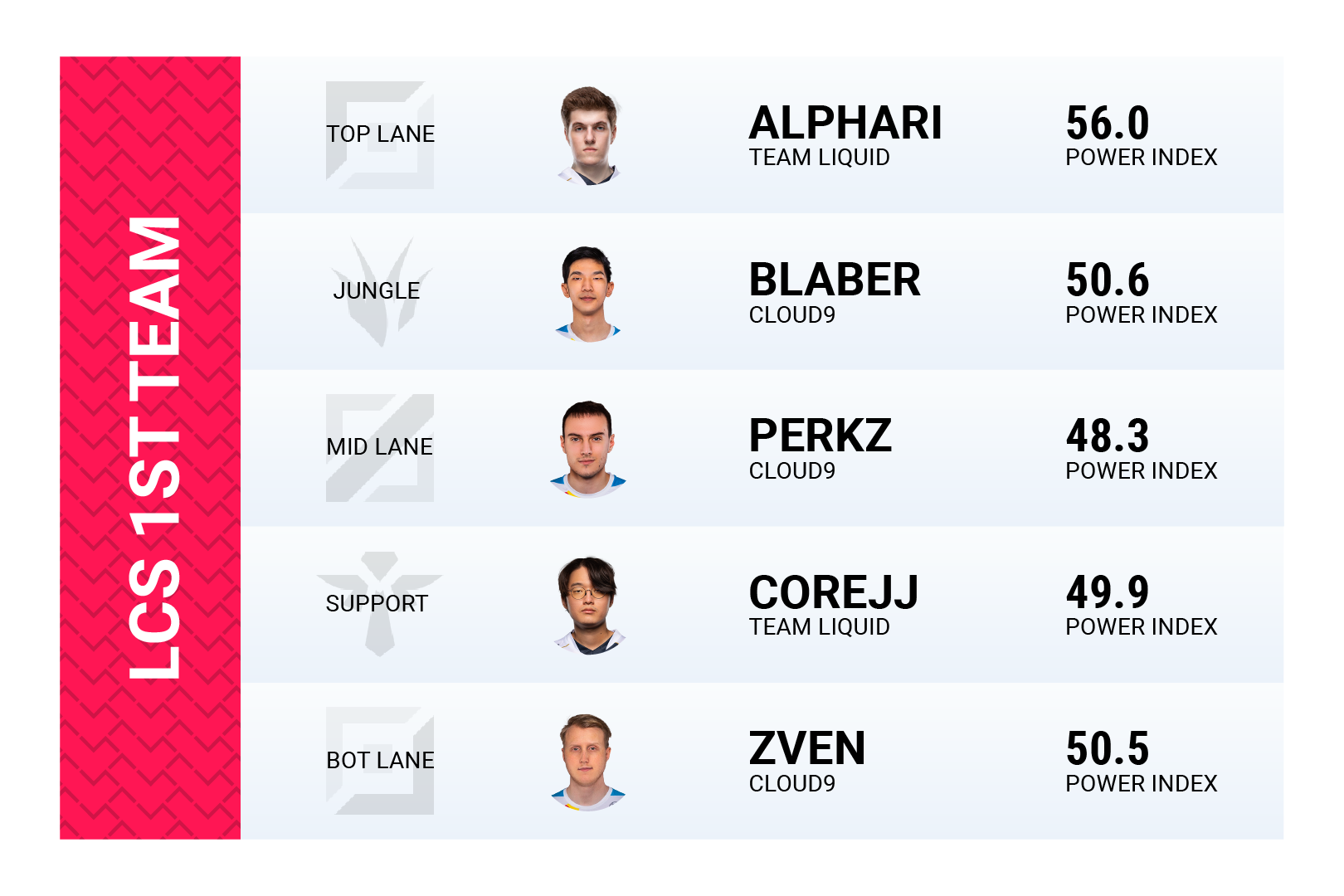 The jungler, mid laner, and bot laner for the actual All-Pro team ends up being Cloud9 players: Blaber, Perkz, and Zven. There are arguments to be made against Santorin, Jensen, and especially Tactical, who hasn’t been playing up to par as the stellar rookie he was last year. For the jungle position, I’d imagine a close voting race between Santorin and Blaber, who have the highest two “Player of the Game'' awards, but Blaber provided more for his team in terms of vision control and kill participating. Mid lane is definitely a toss up between the top three teams: Perkz had a hurdle of obstacles to overcome early in the split having switched to a new region and transitioned back to mid lane after playing bot for a year, but played spectacularly later on; PowerOfEvil is arguably the best player on Team SoloMid; and Jensen has remained as solid has he has since his Cloud9 days.

At the end of the day, I agree with the actual All-Pro bot laner and jungler, but I will stick with the POWR All-Pro mid laner, Jensen. 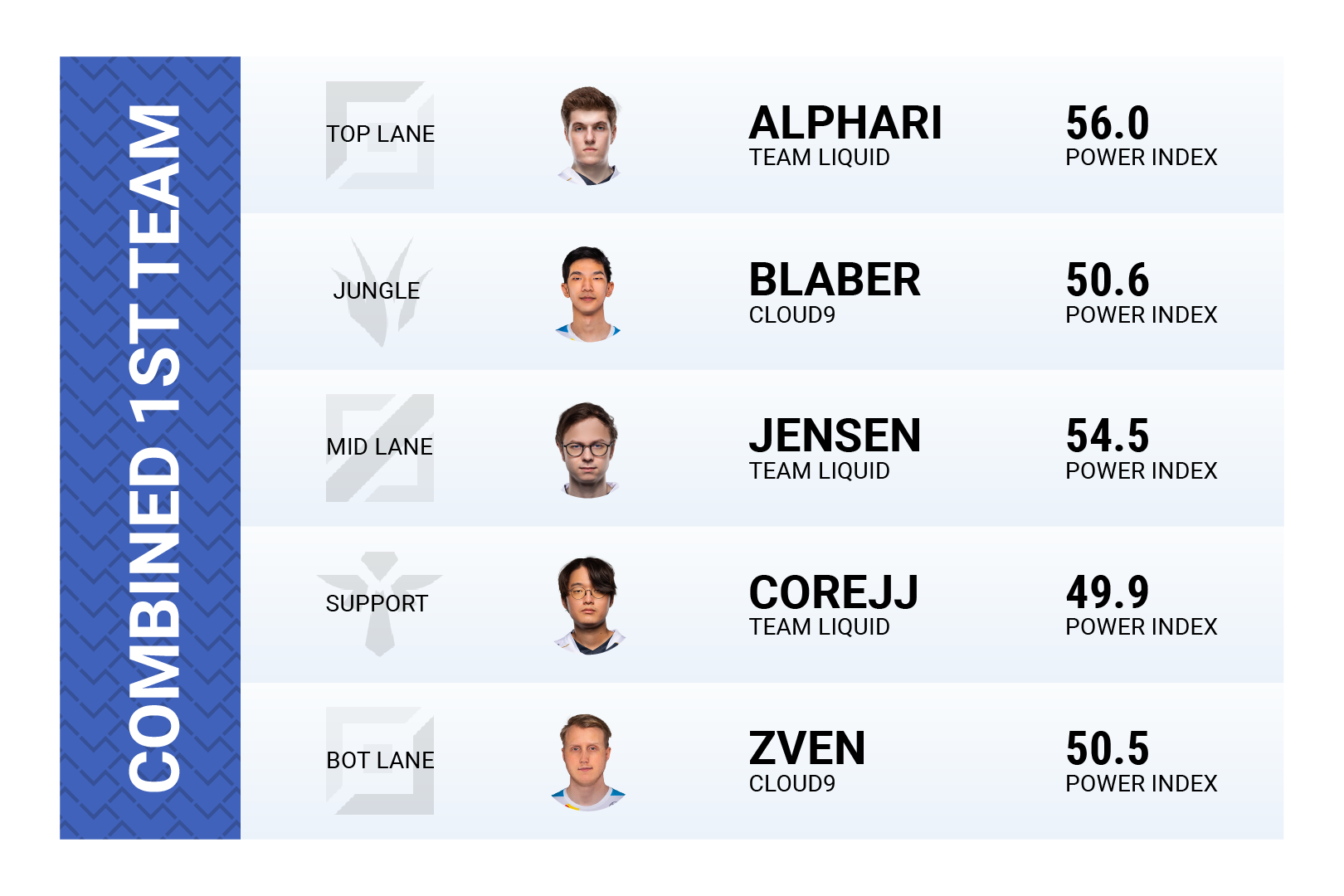 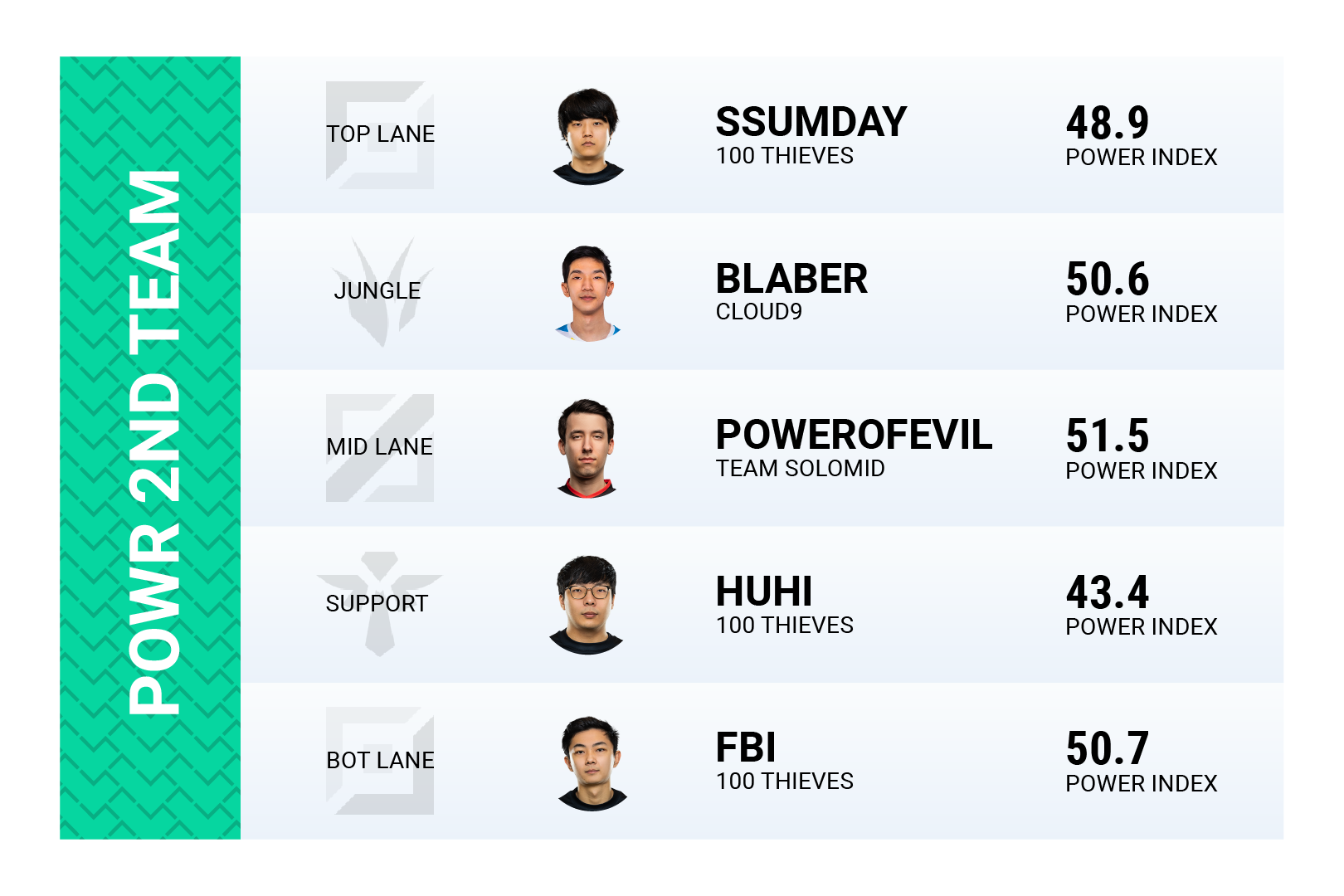 After discussing the first All-Pro team, it should be no surprise that Blaber and PowerOfEvil soon followed up; both of these players were in contention for being a first All-Pro player. The second All-Pro team is filled out by three 100 Thieves players. This team placed fourth overall in the spring split, with 1 game behind second and third place, and tied with Dignitas. Ssumday has always been a top tier player, so it’s no surprise that his stats placed him in the top three; with the arrival of Alphari, his lane kingdom has been called to question since Alphari’s stats have so far eclipsed everyone else. FBI was one of the three breakout rookie bot laners of last year along with Tactical and Johnsun. His support, Huhi, had a resurgence in his career after switching to support. The two were held as one of the best bot lanes of last year. 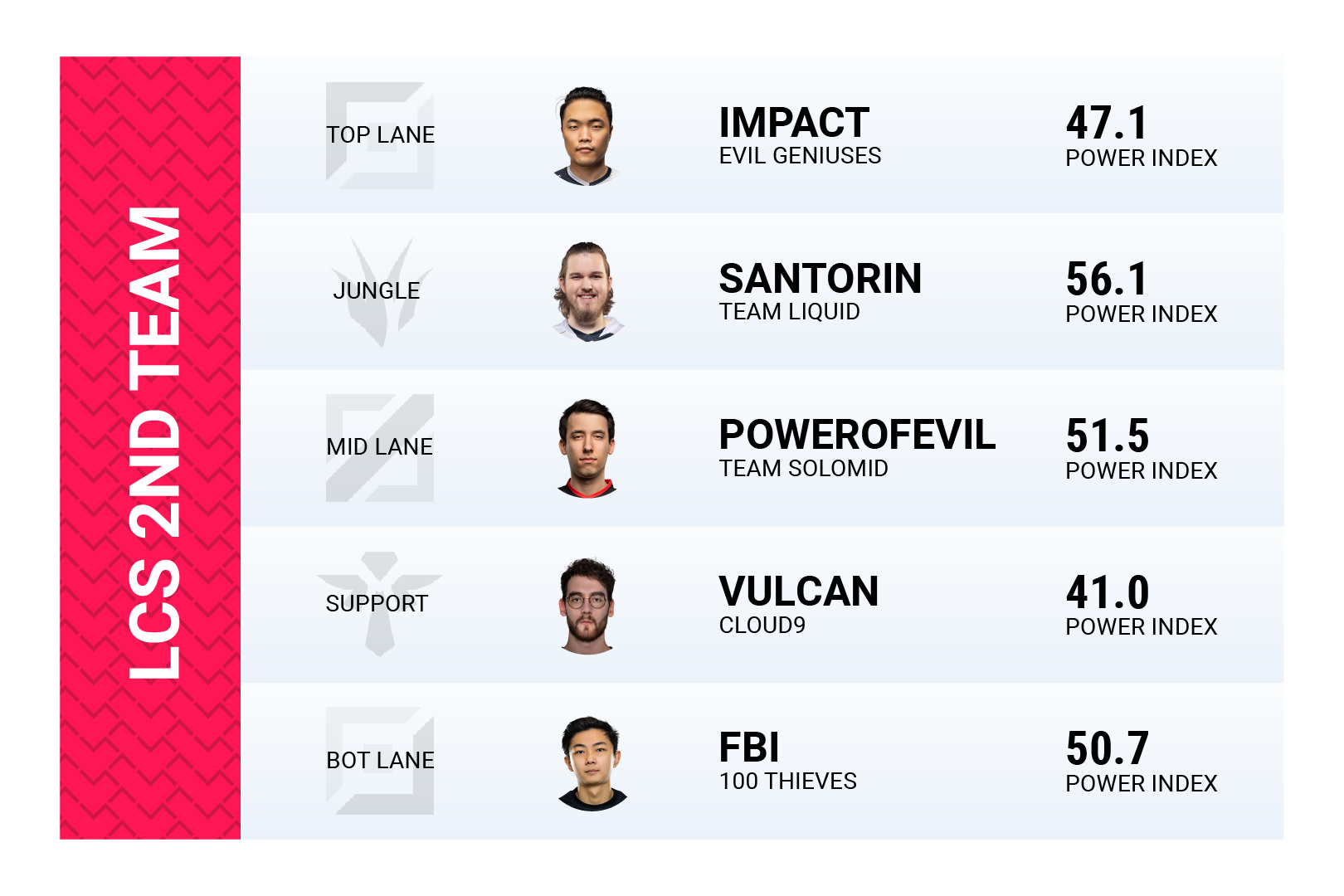 The jungle discrepancy has already been addressed above, so we’ll only focus on top and support. Impact had a great year so far - he has highest kill participation and absorbed the most damage, all while keeping one of the highest KDAs amongst all LCS top laners. Impact has been an absolute shield for his team. Ssumday has seen better splits - while his stats were certainly impressive, they weren’t as all-around as Impact. Ssumday’s advantages have been in lane with great lane control and vision control, but his overall contribution to the game outside of laning phase hasn’t been as impactful (excuse the pun) as Impact.

As for Huhi versus Vulcan, Huhi has had amazing vision control and kill participation. In fact, Huhi’s vision score eclipsed Vulcan’s with an average of 91.5 per game, in comparison to Vulcan’s 78.7. Both do a great job of contributing to their respective team’s success - practically equal, but the vision control is lacking quite a bit.

Having said all that, I’d have to agree with Impact and Santorin as the second All-Pro player, but I’m sticking with Huhi as the support pick: 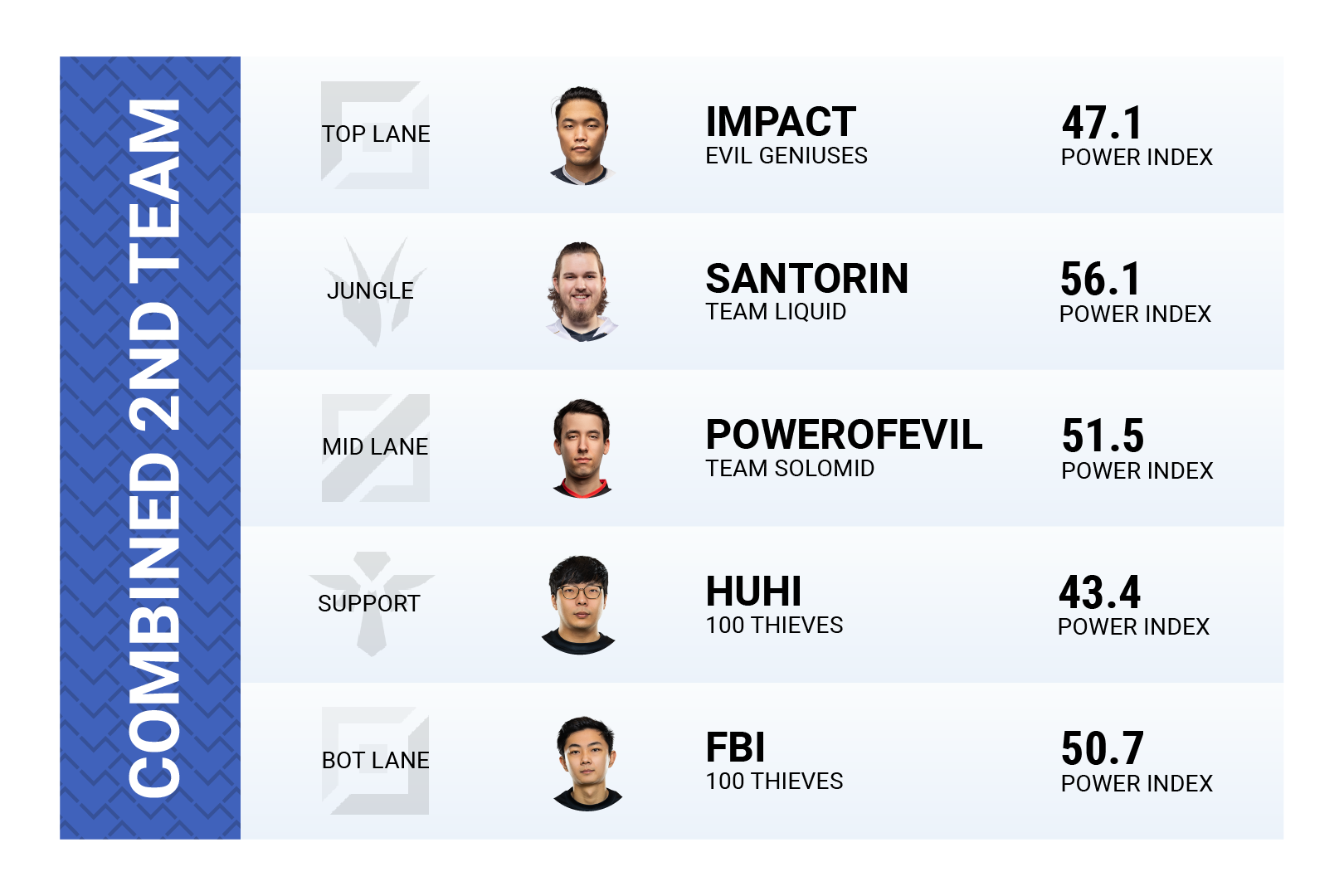 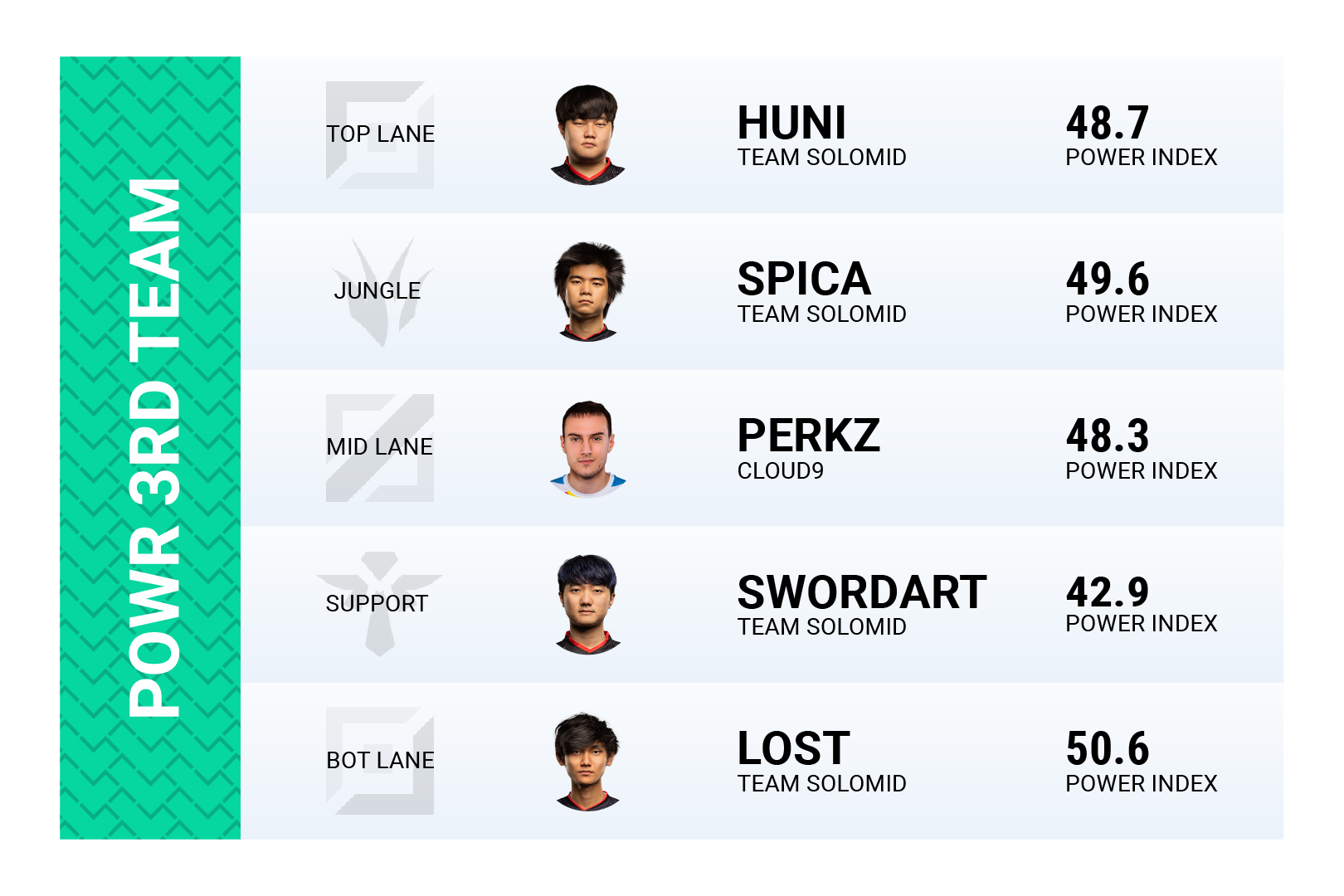 TSM had a rocky start this split, but have proven themselves to be a contender for the spring split championship, and subsequent MSI representatives. Due to their second place performance, the remaining four TSM players locked in third place in terms of POWR rating. They are joined by Cloud9’s Perkz in the mid lane, whose placement has been addressed already in our discussion about the first All-Pro team. 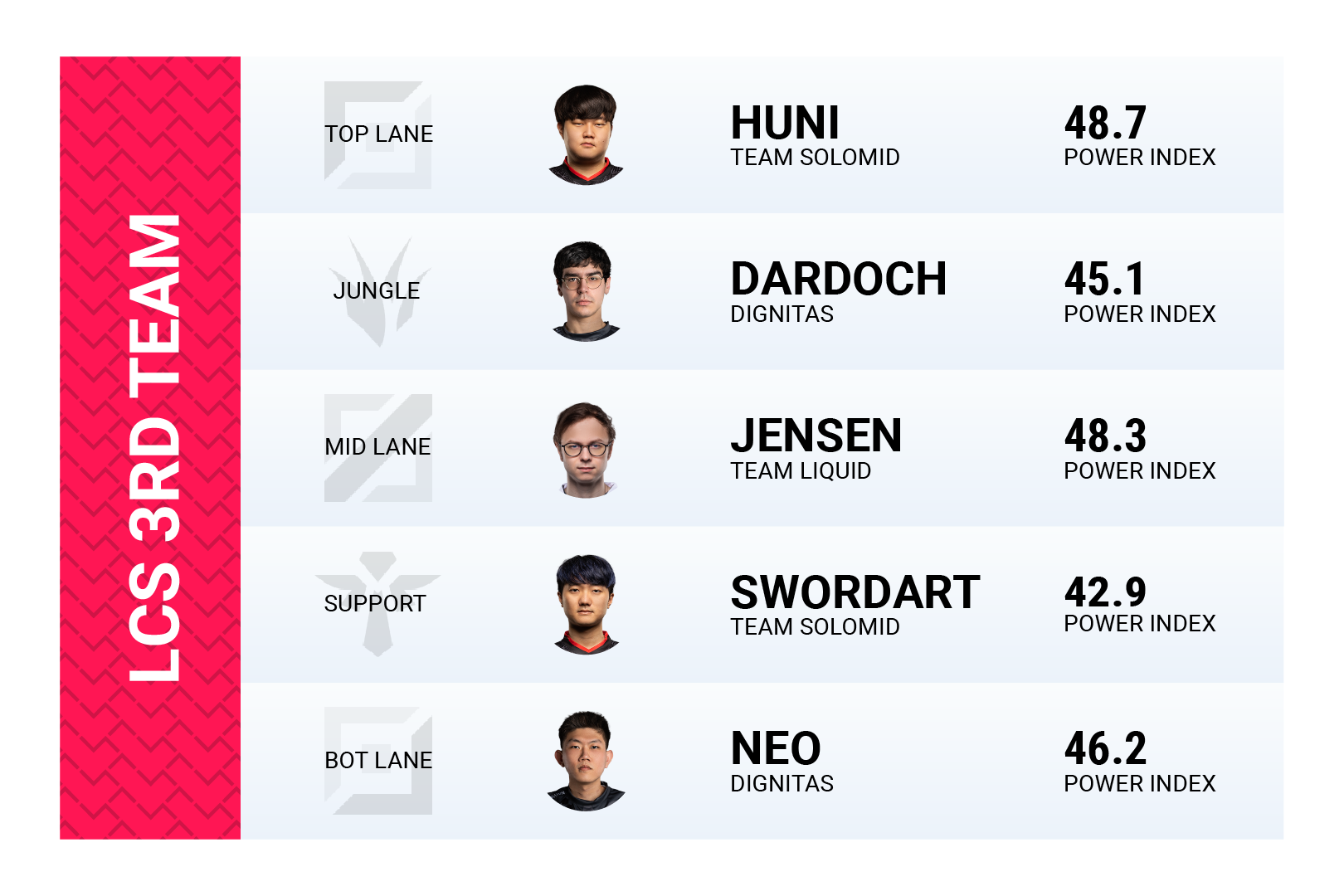 Out of the three discrepancies in the jungle, mid lane, and bot lane positions, we need to discuss jungle and bot. It’s safe to say that Dignitas has had an unbelievable split - tying for fourth place in terms of win-loss record, when everyone expected them to be a bottom tier team. Between Lost and Neo, Neo’s gameplay outside of lane phase has been amazing, and definitely a top pick for rookie of the split. Lost has seemingly better laning than Neo, but he’s also paired up with a world class support player so it’s hard to determine if the advantages are gained because of SwordArt or of his own volition.

Dardoch and Spica, are both good junglers in their own right - Dardoch is slightly more gank heavy, while Spica farms a bit more, but overall they’re both highly effective junglers. Play style would be the key and Spica has done a great job getting his team ahead in the form of objective control. With Spica wielding the smite, TSM has secured more barons and dragons than Dignitas.

The consolidated All-Pro team would therefore be: 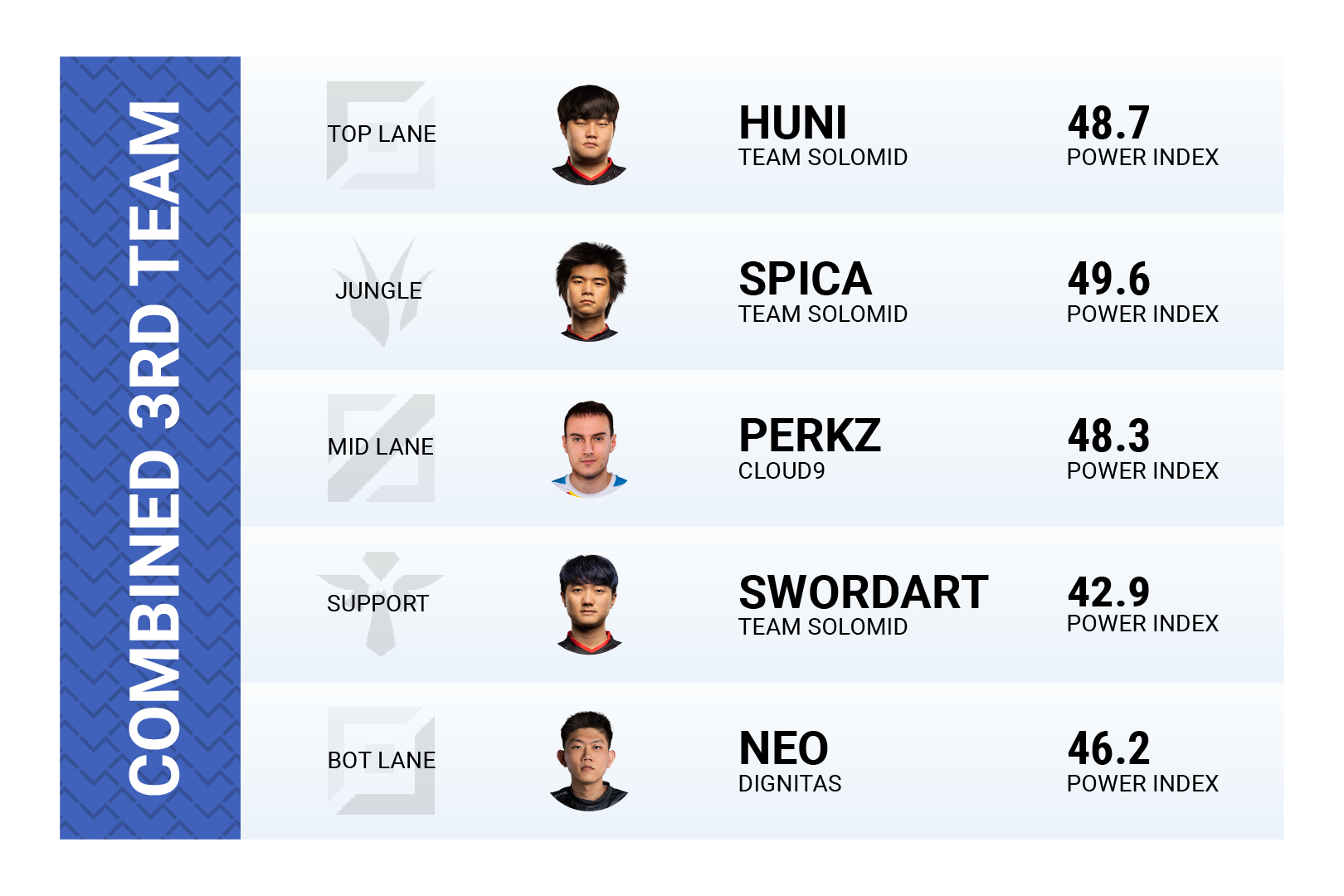 Alphari had the second highest POWR rating, losing to Santorin by a mere 0.1 points. However, it’s not just the high POWR rating that would declare him the POWR MVP, but the fact that there is a massive 7.1 point gap between Alphari and the runner up, Ssumday. The only other player that comes close to this gap size is CoreJJ, but the delta for him is only +6.5 points. Alphari absolutely eclipses any other top laner.

Blaber continued to be as impressive as he was last year, and maintained an excellent form that put him on top as one of the best junglers in the league, if not the best. However, there is a lot of star power in the jungle position that gave Blaber a run for his money, such as Santorin, Spica, or even Dardoch this split.

The same could not be said for Alphari. He absolutely dominated his opponents, especially in a lane that included the likes of Ssumday, Impact, and a revitalized Huni. Yes, Alphari had a few poor showings, but taking the regular season as a whole, his stats hang over his rivals. Team Liquid had a player that took up resources both in draft and in game due to the focus Alphari was getting, which took a heavy load off of the whole team’s shoulders. To quote the CEO of Team Liquid: “Alphari robbed”.