How Maokai went from a perennial powerhouse to a supporting sapling

It’s 2015 and Balls is the best top laner in the LCS. It’s also the year America’s favorite Rumble player was called into question after years as a stalwart playmaker – he was demoted from Diamond I to Diamond II while in a Korean bootcamp, and Cloud 9 faced yoe Flash Wolves at IEM Katowice. Steak, Flash Wolves’ top laner, was killed at dragon by Balls’ Gnar at 24 minutes into the game.

But yoe Flash Wolves won the game, and the set. At 40 minutes into the game the same fight happened with opposite results: Steak took control of the fight on a champion who had burst onto the professional scene: Maokai, the twisted treant. Upon popping a well-charged Vengeful Maelstrom, Steak kills support LemonNation and leaves the remaining players low for ADC Neverloses. Balls finished the game with a KDA of 4/7/9, and Steak won the game with a thundering KDA of 2/4/16.

This was all before 2017 when Riot changed Maokai into something quite different entirely. This is a rework unlike our good friend Galio’s rework which brought a never-played champ into the meta. This is a rework that took a passive, reliable tree and made him an edgier, dynamic support. 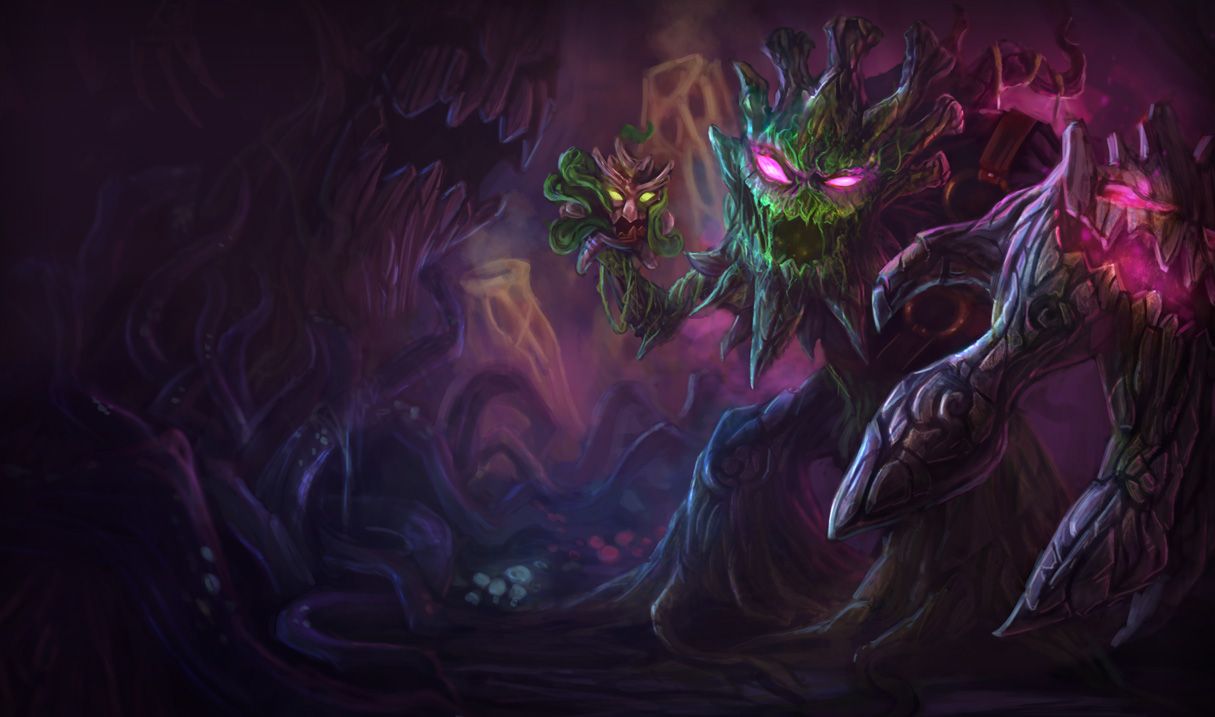 The oldest tree in North America

Upon release in 2011, Maokai was, as Phreak described, a “support tank hybrid.” It can be argued he remains in this role, but his time on the rift has been anything but stationary. It’s important to keep in mind that Maokai has always been a popular champion – he was banned or picked in every game except one of the Season 2 Worlds Finals, his debut year. In 2013 he was nerfed a bit, so he didn’t make an appearance for SKT’s big win.

By 2014 he was back, picked or banned for top laners in every game between Samsung White and Royal Club. Looper could take tower shots, CC lock Cola, and walk away for his team to get the kill. This versatility ensured SSW’s win – Looper won both of the games he was able to play Maokai, and the one game Cola got to play the tree was the only game Royal won that series.

After the world stage Riot decided to give Maokai got a slicker look – less bulky, more bark pulled back like a pompadour. In 2015 he still showed up in 700 games across all leagues and tournaments, and his winrate was a still reliable 53 percent. The toplane was starting to change, though, as champions like Gnar and Fiora made their debuts in 2012 and 2014. (Fiora wasn’t seen as a serious competitive top until 2015, the data seems to reflect.)

The lumbering lumber made it into 797 games in 2016. His winrate stayed high at 51% across the board. Having received a round of nerfs on his health regen and Arcane Smash in patch 6.11, he didn’t make his routine appearance at Worlds with toplaners opting for the recently (and finally) good Poppy and Trundle instead.

It was the last opportunity the Maokai of the first five years of the game would have to play at the international stage.

Hybridization, or the future of plants

Upon his rework in 2017 things began to look very different. After a quick round of nerfs in the beginning of season seven, halfway through the season Riot took Maokai in a new direction. The cheekiness of framing it as a “return to his roots” was clear to any longtime fans of the champ – it was a brand new territory. Alongside Sejuani and Zac, they wanted to give him new life. And they surely did.

On the whole, the company wanted the treant to be more “plant” than “magic.” Arcane Smash –> Bramble Smash. His W got a nerf in terms of time rooted. Really the support transition came from the changes to the sapling toss: this was Riot saying “play him as a support please.” Mana and cooldown dropped, and the slow time hurts much more than it used to.

His ultimate that earned Steak a win against Balls at Katowice was gone. It became basically a Nami wave, rooting rather than knocking up.

These big changes worked for Zac and Sejuani – both champs were either picked or banned in the World Finals of Samsung Galaxy versus SKT1. Like 2016, Maokai made no appearances, though unlike 2016 he was spotted in the quarterfinals and group stage. To be clear, his significance had already dropped: he was only banned three times, and as the games became more competitive he showed up less and less.

Importantly, he was still being played in the toplane. In 2017 he was picked in 1,277 games, and his winrate was actually higher than the previous year at 52 percent. The key factor? An enormous 67 percent of those wins were before the rework on May 17th, 2017. The rest of the games were in the summer splits across regions, with Maokai wins ceasing by mid-September.

By 2018 the data on Maokai was in and his disappearance was final. He was not picked or banned in any game at Worlds, much like his transitory year of 2016. He was only played 167 times across all regions, though his winrate was at 54 percent. Season nine in 2019 was his hat trick, and his third year of no-shows. He was only in 22 games total. Though something was worth noting: his winrate in those 22 games was a walloping 63 percent. And they were in the toplane.

It feels a little disrespectful to point out 2020 as the fourth year of no finals Maokai play. But the patching of this champion is worth noting.

Throughout his off seasons, the champ received lots of bug fixes and minor changes like mana reductions or damage increases. Significantly, though, no major changes occurred from patch 7.10 through to today. It seems that Riot is actually happy with where their tree is planted.

Thankfully, there is actually a sunny end to this twisted story.

While his days as the “it girl” of the top lane are through, Maokai has found that new life that the company was looking for. In 2021 his winrate as a support is a crushing 73 percent. He is played overwhelmingly in the LCK or by former LCK players like Ignar and SwordArt. In fact, of the 11 Maokai games of the year two of three losses where by Canadian support player Diamond on FlyQuest. Not to dunk on Diamond – the meta always emerges in Korea, and it looks like he’s on that Beryl level.

He’s even been seen as a midlane, jungler, and back in his old home of toplane. (And once as a carry in the bottom lane by Route in the LCK. Maybe Korea isn’t always right about the meta.) He showed up in 84 games in 2020 with a winrate of 59 percent. That said, the POWR on those Maokai games isn’t blowing anyone away. The average POWR rating in 2020 was 40. The highest in 2020 was 68 by none other than Beryl. In 2021 IgNar scored a 69 as the tree for the LCS – not shabby.

Though his history has been anything but clear, he’s starting to find his step again. Players have begun to push the champ into new, creative places. Perhaps his rework wasn’t the death knell. Perhaps there’s a chance for the tree to bloom again.