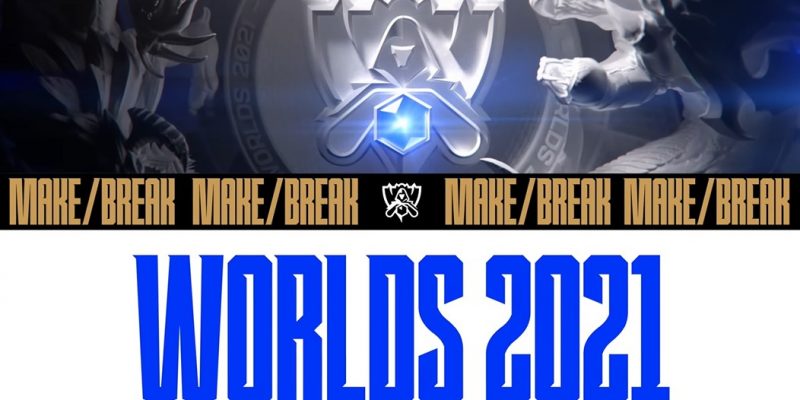 Fans of sports have always loved comebacks. Players doing the unthinkable or overturning incredible odds. These are the moments that live in the memory of supporters and players alike. For League of Legends fans, however, comebacks have become very hard to find since the Ardent Censer meta four years ago. Gone are the days of full scaling compositions, of third Elder Drake, of fifty minute five-on-five team fights. Instead, average game times have decreased 10-15 minutes globally from where they were just four years ago, meaning less opportunities for teams to draft scaling compositions, farm up, and hope to make that glorious comeback.

Every passing season makes finding that elusive season ever more difficult. More and more organizations have shifted their scouting, preparation, and drafting in the hopes of creating a team that can better emulate the aggressive, snowballing style of the last 3 World Champions in Damwon, FPX, and Invictus Gaming.

However, hope still remains for fans of those big swings and miraculous turnarounds. Comebacks, while rare, still do happen in League and there are a few teams heading to the World Championships that have shown they have what it takes to comeback from any deficit.

In order to show you why these teams have been able to consistently create comebacks, it’s important to define a “comeback”. In order to determine a reasonable definition for this term, I contacted several Coaches and Grandmaster+ players in the North American Academy scene. Their feedback provided a clear consensus on what was considered a comeback in their eyes.

Now that you know how we define a comeback, it’s time to unveil the three comeback kings that are headed to Worlds based on Factor’s data: 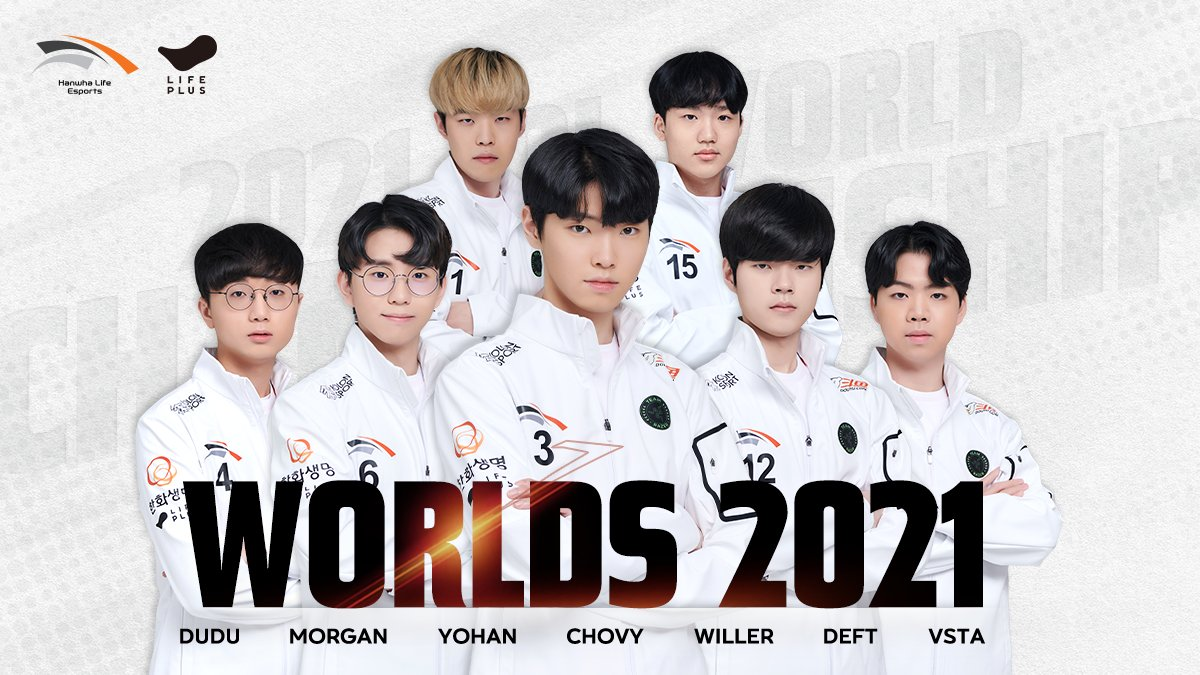 Hanwha Life (HLE) has taken one of the longest routes to the World Championships in recent memory, climbing through the Regional Qualifiers after finishing 8th in the summer split. A lot of their struggles stemmed from their poor early games: HLE had a negative Gold Difference @ 15 in both the Regional Qualifiers (-34) and Summer Season (-140). 5 of HLE’s 17 regular season wins came from gold deficits with 2 of them meeting the criteria for a full comeback. They showed further progress in their Best of 5 final with T1 winning Games 3 and 4 in clutch team fights. Game 3 in particular stood out as HLE overturned a 3k Gold Deficit @ 15 against a stronger team fighting composition from T1.

Much of HLE’s team fighting success can be attributed to the star power of Chovy and Deft, who both rank in the Top 5 in the LCK for Average Damage/Teamfight and Average Damage to Champions/Minute across the entirety of 2021 in the LCK. The early game weaknesses will certainly make comebacks even more difficult against the stellar competition at the World Championship. That said, so long as Morgan, Willer and Vsta can continue to combine well and understand their roles next to their star carries, there won’t be many games that HLE can’t turn back around. 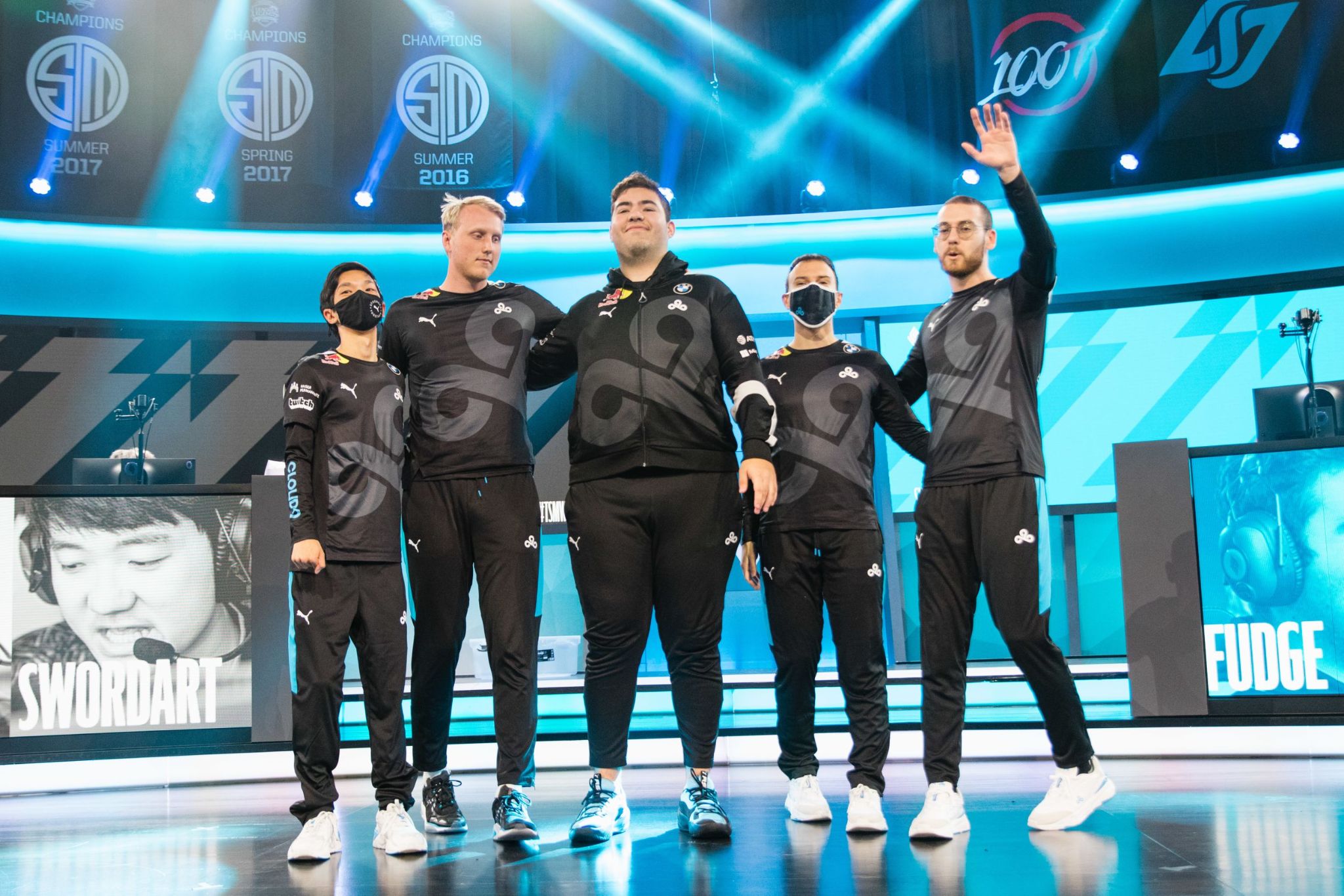 If spring was the only split in a League calendar year, Cloud9 (C9) would not be on this list. They were ruthlessly efficient in spring, dominating the early game behind the unbridled aggression of Blaber with backup from Perkz and Vulcan. However, as the meta shifted and summer rolled around, C9 found themselves in a major slump. Instead of finding comebacks however, C9 often withered to defeats when they could not find early advantages or build a large enough snowball. Their only comeback of the summer split was against 10th place Counter Logic Gaming in which they trailed by more than 4,000 gold for ten minutes before the pivotal thirty-fifth minute.

Things changed for C9 in the playoffs. Despite trailing by an average of 1000 Gold @ 15 over the course of the playoffs, and having on average 800 less total Gold @ 15 than they did in the summer split, C9 actually increased their average damage per teamfight by 400 between the regular split and playoffs. That’s more than double any other top 6 LCS squad. Fudge, in particular, upped his damage output in these fights by over 100 from the regular season.

This newfound resilience helped them pull off three wins against Evil Geniuses from significant gold deficits, with Game 2 and Game 3 qualifying as comebacks. They pulled off yet another comeback in Game 2 of their series against Team Solomid for World Championship qualification. It’s not necessarily the most surprising thing to see C9 stepping up and outplaying to overcome the odds: Blaber, Zven, and Perkz all ranked in the Top 10 on the POWR Index for the LCS after all. Furthermore, they always have “Playoff Perkz” on their side for high pressure situations (you can check out Ivan Sheng's article for a deeper dive into this phenomenon). Regardless, C9 have been willing and able to fight their way out of trouble when their early games go awry in the biggest moments of their season. That is always a variable worth watching as they journey to the pressure cooker that is the World Championship in October. 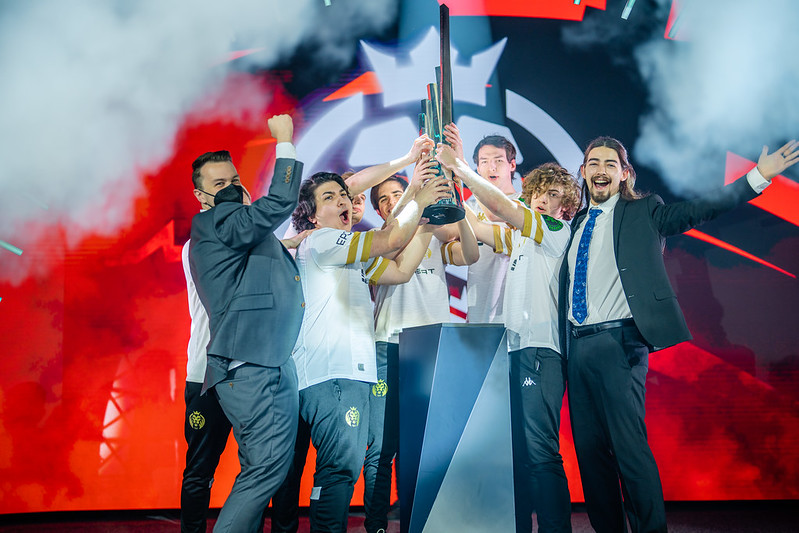 The MAD Lions (MAD) are the undisputed kings of comebacks in professional League of Legends. They are so good at drafting for and executing mid game team fights that they have become the exception to the snowballing rule in professional play. Don’t believe me? Let’s take a look at the numbers.

MAD ranked fifth in the LEC for Gold Difference @ 15 but still managed to win twelve games and finish in third place. The frequency in which MAD found themselves in gold deficits resulted in three of their wins being secured via comeback, or 25%. The story was very similar in the summer playoffs, where MAD was the only LEC squad to qualify for the World Championship with a negative Gold Difference @ 15 (-235)! MAD had to pull off comebacks in two of their three wins against G2 Esports and one of their three wins against Rogue to even get to the finals. This is yet another example of 25% of MAD’s wins being come from behind victories.

There is no denying that MAD set themselves up for successful team fighting in the draft, but there are wrinkles to MAD’s strategy and certainly more depth to their teamfighting talent than simple drafting. Let’s look at Armut and Kaiser as examples. Armut is often cited as having a relatively shallow and predictable pool of champions by the community. This claim is supported by his pick history: 23 games of Jayce, 20 games of Gnar, 17 games of Wukong, 12 games of Renekton. The next closest meta champion in his pick history is Lee Sin at 6, and he is no longer a viable top laner. Comparing the summer split to the playoffs, Armut was able to increase his Average Damage Per Teamfight from 279 to 368, his Average Kills from 2.8 to 5.1, his Average Assists from 5.9 to 8.6, all while decreasing his Average Deaths from 3.06 to 2.36. That is an exceptional jump in teamfighting output without a drastic change in playstyle, especially considering all of his opponents could easily predict what champions he would be picking. Kaiser, who typically functions as MAD’s second source of playmaking, was also able to buff up his output in the playoffs, increasing his Average Assists by nearly 5 from the summer split. That is a massive number when you consider that he actually played over 33% of his playoff games on Braum, a pick that is used to kite back and peel instead of dive in. This ridiculous boost in playoff numbers shows that, so long as MAD has some semblance of team fighting in their composition, they will outfight you when the right moments in the game arrive.

These numbers are already impressive for MAD, and I haven’t even touched on Elyoya, Carzzy, and Humanoid, three players that finished 1st, 2nd, and 4th respectively in the 2021 LEC POWR rankings. All three of these players boosted their team fighting stats in the LEC summer playoffs, though not to the same extent as Armut and Kaiser. This is an extremely encouraging sign for the squad, who have now all proved multiple times that they can power up individually and collectively against the toughest competition in the biggest moments. That is the perfect recipe for success at Worlds where, whether you be fan or foe, you best not count MAD out of a game no matter how far behind they may seem.

Larssen reflects on LEC championship and looks forward to Worlds 2022: “I'm very happy with our group.”

Do LoL pro players get every League skin and emote?