Oct 25, 2022
Red Side Vs Blue Side
Analysis
Informative
Cover.png

There’s an important piece of League that results in it being a fundamentally unfair game, no matter how hard the balance team may try. It doesn’t arise from a single broken champion or role, it’s pronounced at every level of play from casual to competitive, it has statistically significant effects on win rate, and it’s so crucial that you’ll hear it discussed as strategy by the announcers at Worlds.

It’s Red side vs. Blue side.

For context, to demonstrate the magnitude of this disparity, consider that at MSI Blue side won 52.63% of the time. That’s a % win rate that would have the developers pondering nerfs in solo queue.

This article is an explanation of what those differences are, how they directly affect gameplay and strategy, and why they are immutable challenges for balancing a game more than ten years after its inception.

Nearly all playing fields in physical sports are symmetrical (the exceptions usually have a modal difference like baseball’s hitting and fielding, which negates the asymmetry through trading roles). I want to be very clear on what symmetry is.

There are 3 notable kinds of symmetry (additional ones like Glide are compositions of these 3).

Translational Symmetry is when you have one object moved relative to its corresponding object. They’re orientated the same, but they’re in different places. 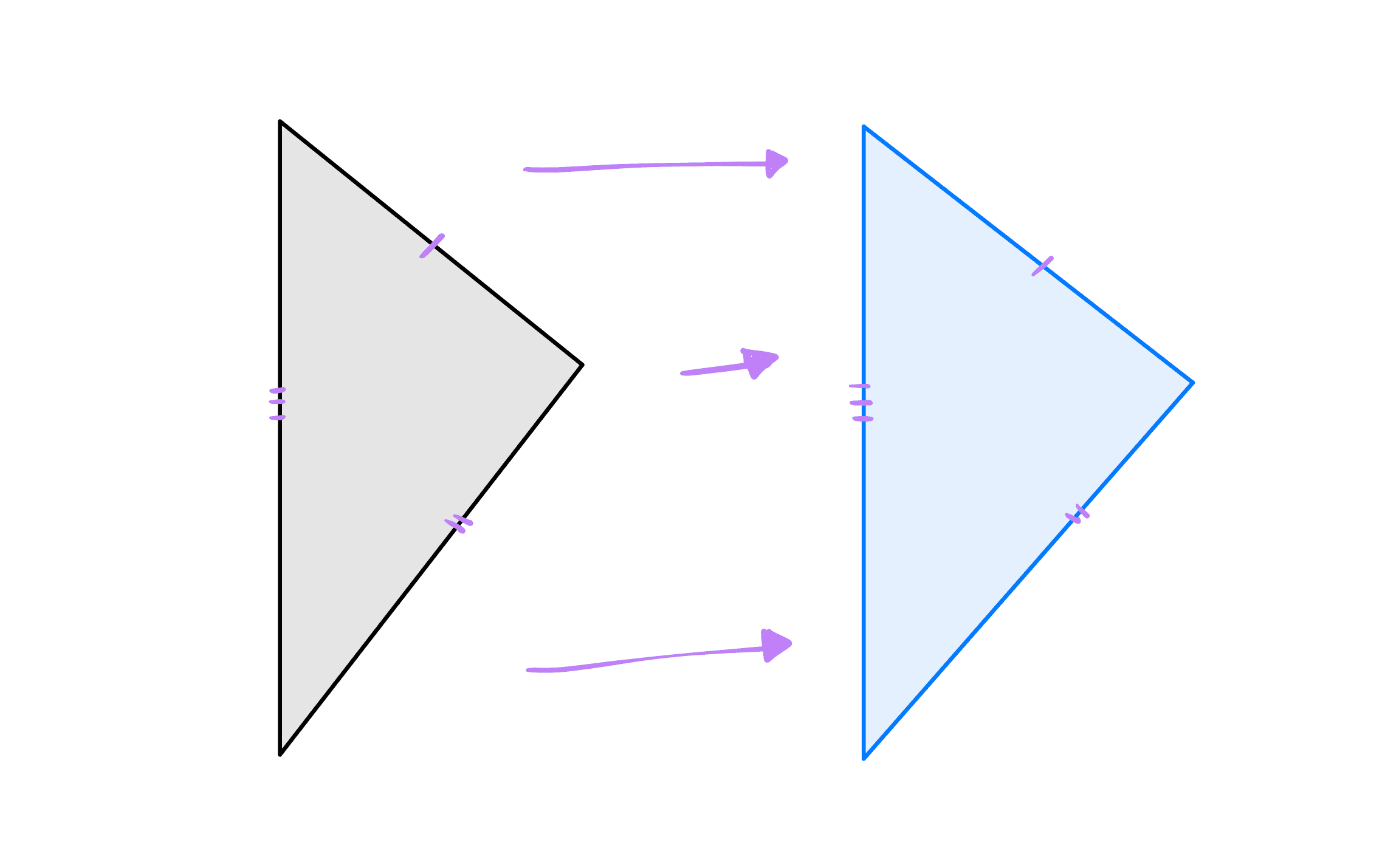 Reflexive Symmetry is when you can fold an object in some manner such that each point lines up with an equivalent point on the other half. An example of this would be your face. 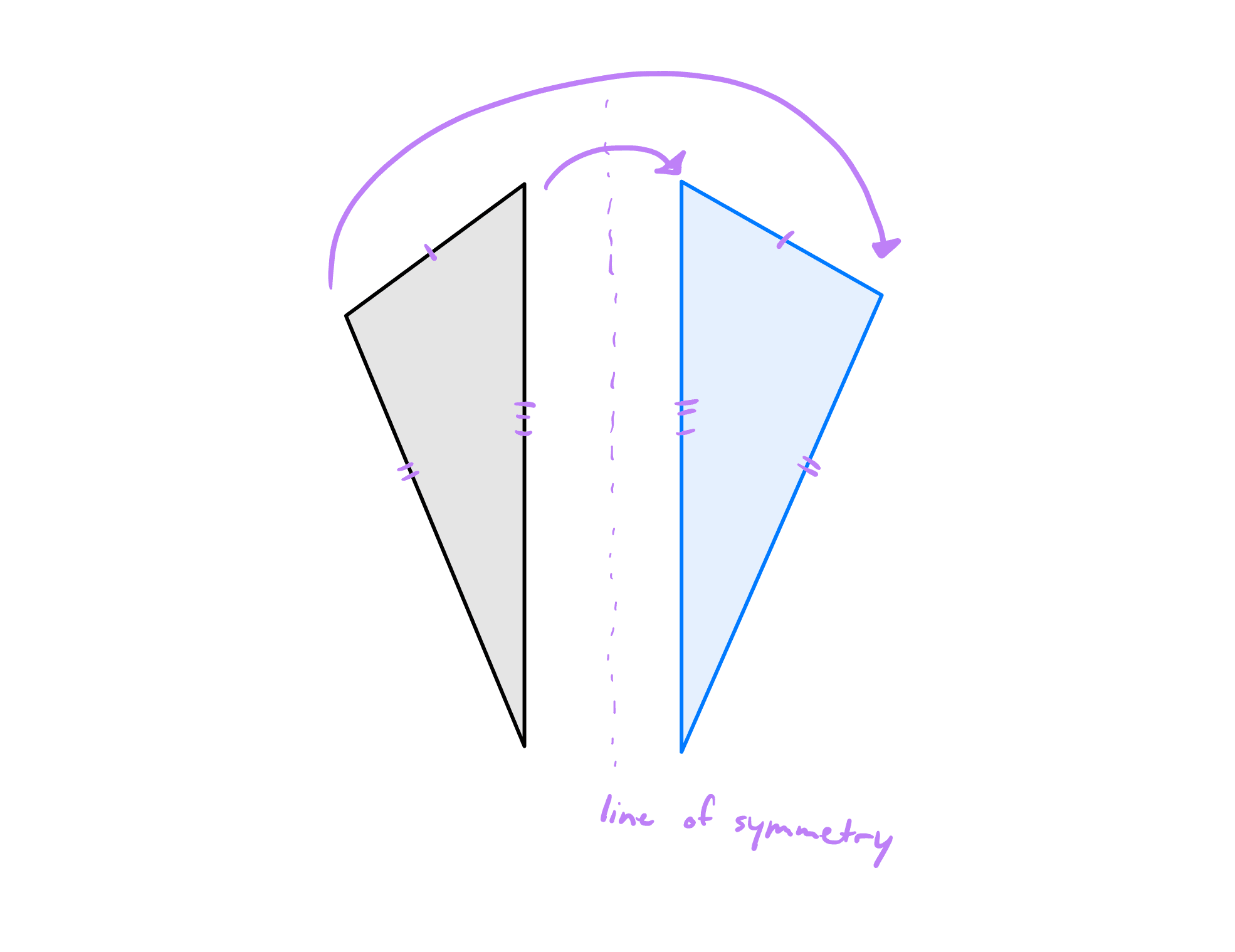 Rotational Symmetry is when you can turn an object about its origin, and you can rest it in another position that is equivalent to when you started. A Beyblade would be an example of this. 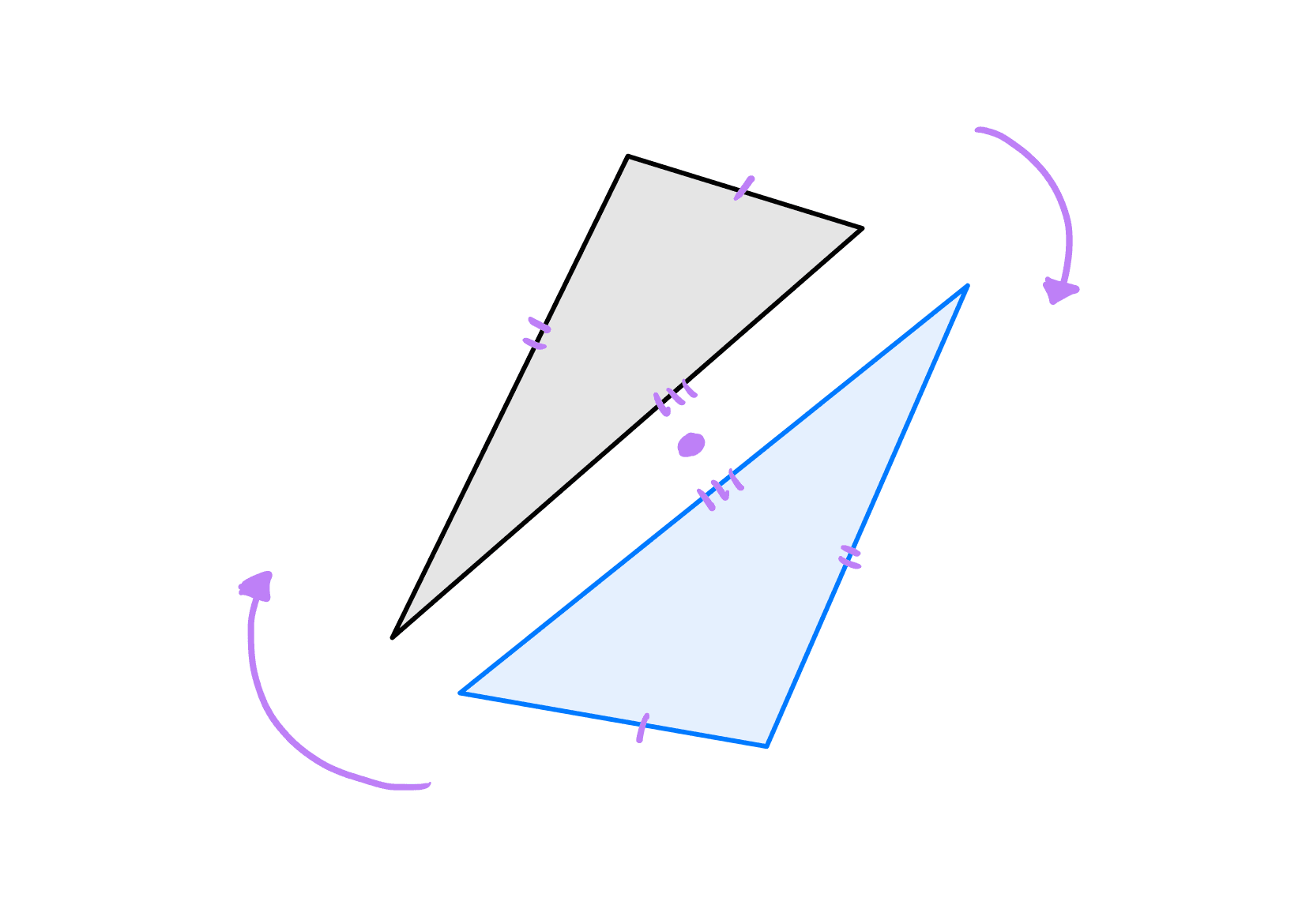 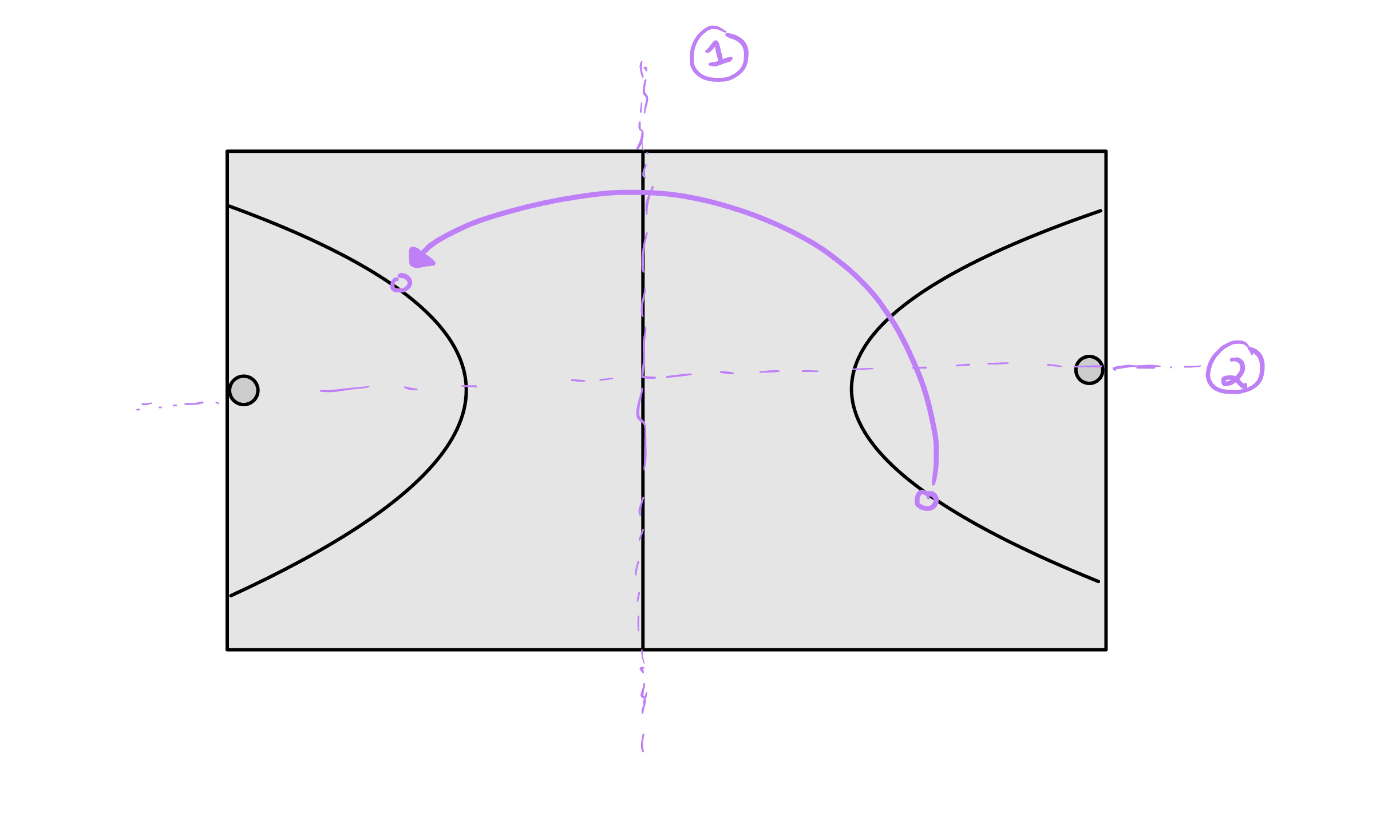 Summoner’s Rift and its analogues like Dota 2’s map almost have symmetry. Structurally, much of the map seems to have rotational symmetry. The walls and rock fixtures correspond not across a line but through rotating the red and blue sides. 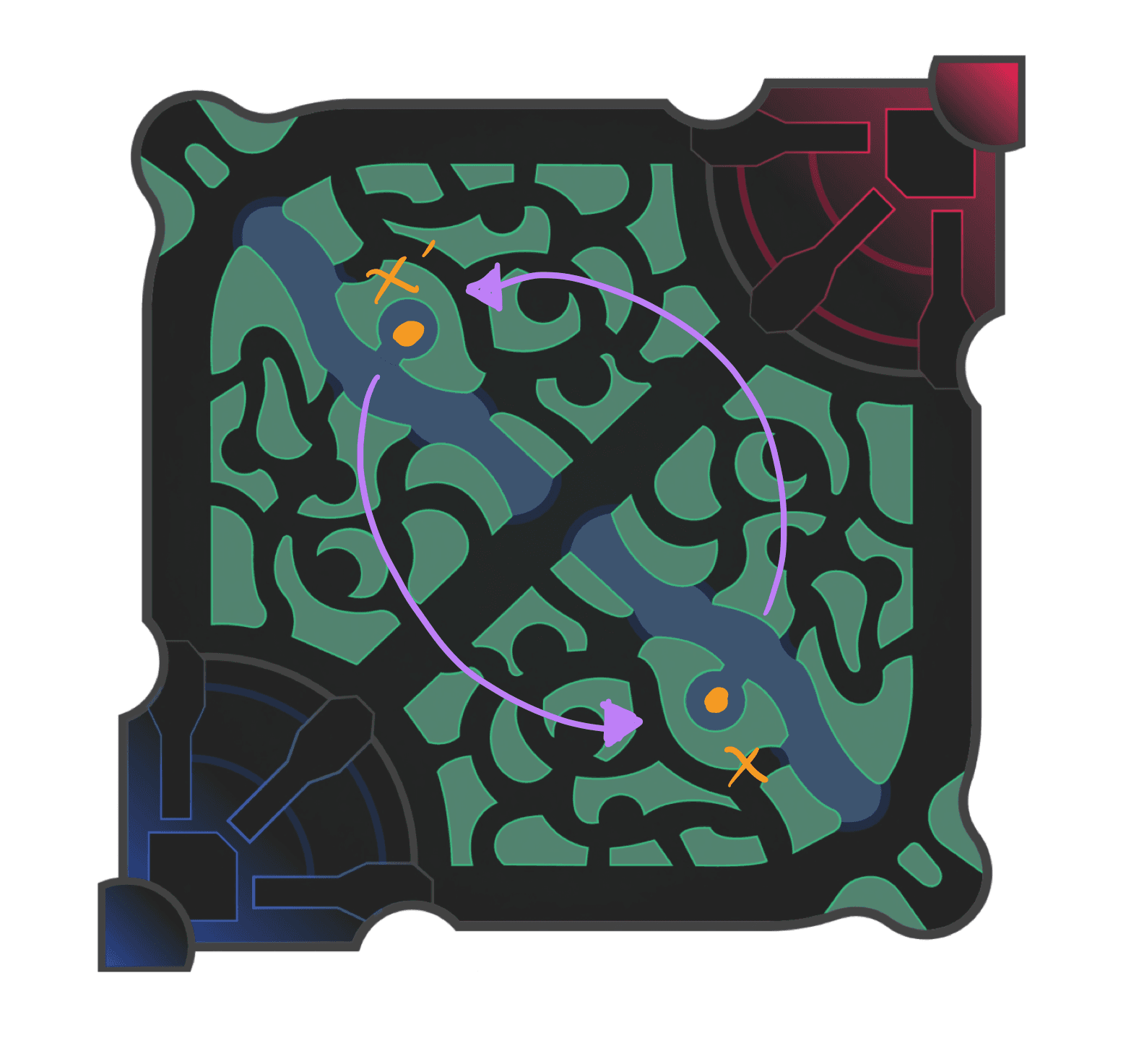 But, because the top and bottom lanes have different numbers of teammates and entirely different champions selected, the emergent play is not symmetrical. For example, Red side top lane has many more access points to dive tower, which is why we see clustered first bloods on Factor’s heat map spread around the area. 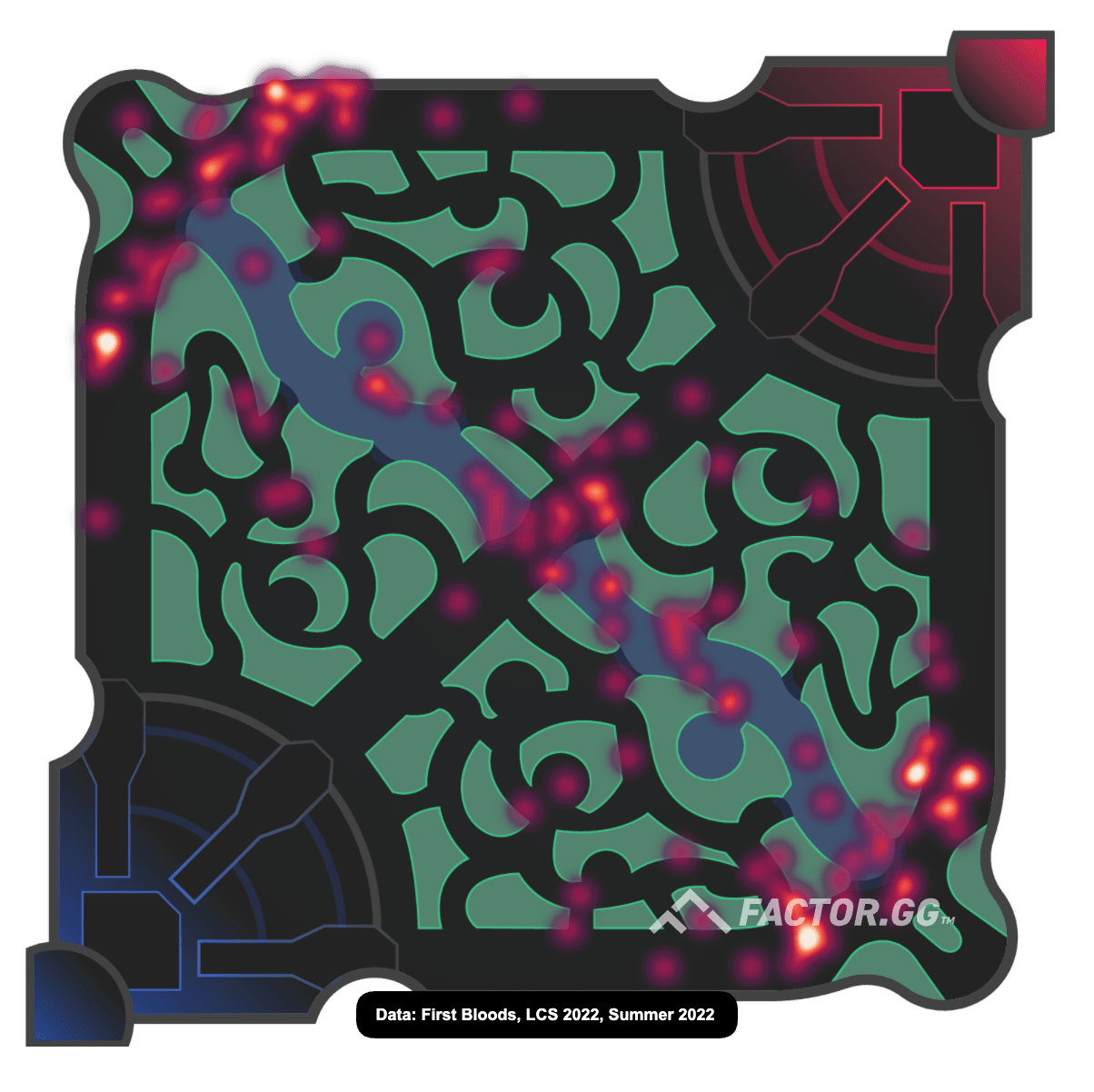 This extends to jungle picks wherein your best leash comes from bot lane, but many junglers have different clear speeds based on whether they’re using their earlier level on multi-unit camps or single targets.

That’s not even including the meta defining structures of Rift, Baron, and Dragon. Although the walls may correspond, the value on the map itself is not rotationally symmetrical, meaning that the significance of traversing those boundaries differs. Selecting a jungler with an ability to hop over walls is more important on blue side because of the smite steal prospect.

(There’s also one special bug I’d also like to share with you that’s relevant. Back in 2020, Vandiril posted a video explaining an oversight that caused Blue side siege minions to have 20 further range than the Red side siege minions. This was unnoticed for over ten years and would result in an ever so slight push advantage for Blue side. It has since been fixed.)

Outside of Blind Pick, both teams cannot select the same champion, and that causes ordering. This is done through a Pick/Ban phase where each team alternates their picks and bans based on the side of the map they represent: Blue side or Red side.

The delegation of side choice depends on the tournament, but the most common staple is that the higher seeded team gets to pick first. From there, it can branch off into the losing team getting to pick or a basic alternation of choice.

Blue side, which has historically been advantaged by win rate, gets first pick but not last pick. First pick can be valuable when there are powerful flex champions not immediately banned. However, Red side gets to select two potential counters or a strong pairing, while also getting a final counter pick to round out the team.

This has a notable effect on selections of bottom lane lineups. By having two champions ever-adjacent with opportunities to combo, securing cohesion matters. Lucian and Nami are a strong example of this. Neither one is selected often in isolation, meaning that you rarely dare to pick one by themselves instead of in a back-to-back segment.

Phase 2 of bans and picks also come with respective pros and cons. Here, Blue gets to choose a potential counter combo, but Red responds with the final say. This finale can make or break team compositions, considering League has some punishing counters available.

I hope I’ve helped to elucidate why Red vs. Blue side is a recurring discussion point as you’re watching Worlds. The pick order affects the draft, the draft interacts with each side’s layout, and the cumulative effect is a serious point of strategy developing from what at first glance looks trivial.

It is unlikely for the win rate discrepancy to ever be fully resolved. Perfect balance on the map would require moving Rift, Baron, and Dragon to the opposing corners and unrotating the jungles to give us reflexive symmetry. Draft pick would need to be removed for a hybrid blind pick where each team can select the same champion. None of these are reasonable or enjoyable changes to make, and we must accept that no matter how hard Rito tries, perfect balance is unachievable.

To the teams at Worlds, whether you are Blue side or Red side, best of luck.

If you’d like to learn more about how pick order is affected by the available overpowered options in a meta, check out Part 2. It’s incredibly dense but maps out the game theory logic to how professional teams should select and order their bans and picks in metas with overpowered options.