Staring down the fearsome top laner Alphari, Coach Bjergsen chose a tactic that doubled down on defeating the ubermensch.

In opening the LCS playoffs, TSM chose to go Red side so they could counter pick on the top lane. They opted for Irelia on Huni against Gnar for Alphari. By 44 minutes into the game, TSM were dying at fountain as Mega Gnar held himself at 2/0/10 – he only died in the final seconds of the game as he trolled PowerOfEvil. In summary, their tactic didn’t pan out for them as they proceeded to win only one game in the series. Blue side gets the first pick, and this tends to outweigh the ability to counter pick.

Since the early days of League, determining wins and losses off of which side you happen to start on has been the bane of solo queue stars and pro teams alike. A bit of a spoiler: blue does have historical precedence as the better side. There was a study published in 2017 taking a look at the perennial blue side win rate advantage of four percent. While a critical study, it’s been four years since its publication – it covered Twisted Treeline, for example.

At Factor we have access to regional and league-specific stats, to boot. Here’s a look at the side-specific revelations from since the start of 2020.

Across the 3,154 games amongst all regions and tournaments (excluding LCS Academy & EU Masters) in our database over the last two years, 1,655 wins were on blue side. That leaves 1,499 wins for champs starting on red side. That’s a 52.47% win rate for blue side and a 47.53% win rate for red side.

Where do they win?

The numbers vary a lot across regions and there are some interesting numbers to tease out for the observant eye.

In the LCK, where they played more than 300 more games than the next most-played league, blue side won even harder than in other leagues. Their winrate on blue was 54.86%. The LCS saw a similar win rate of 54.69% on blue. The LLA (Latin American League) has the lowest blue side winrate at 47.57%. The LEC is not too far behind at 47.97%. 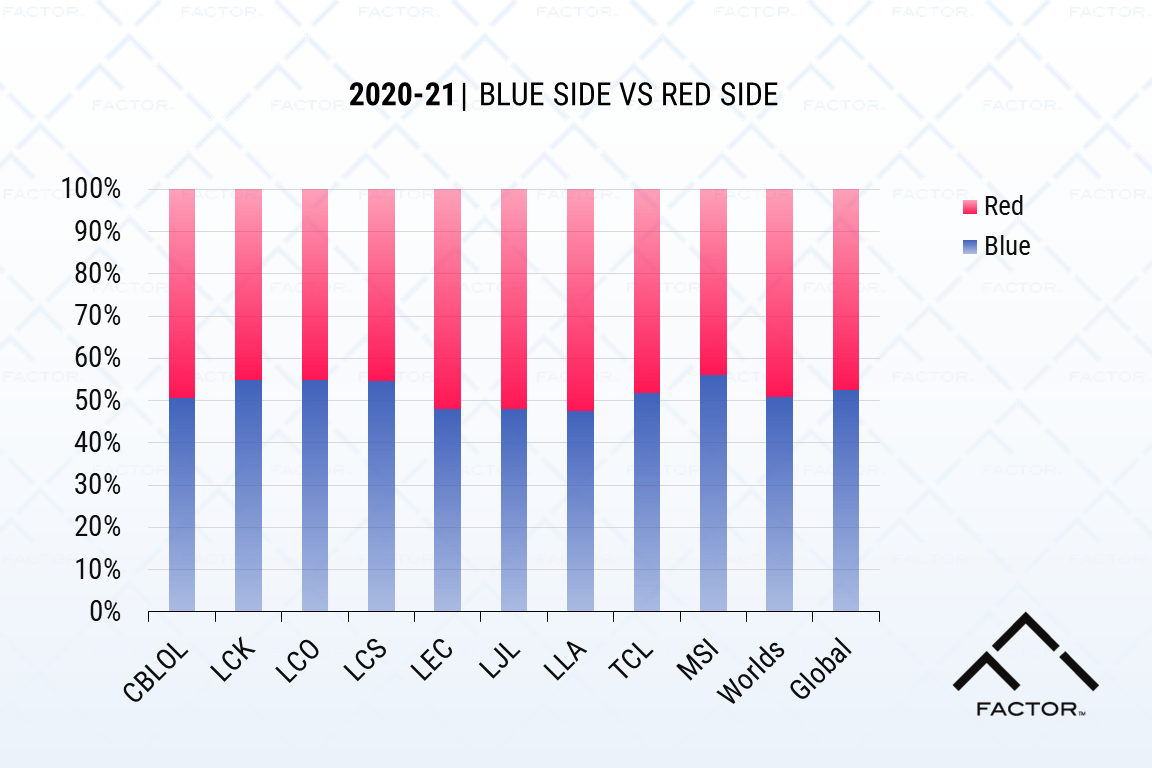 Throughout the game’s history, different patches have changed these numbers. There’s always been debate and official language for the company, too. For example, in 2020 Game Director Andrei “Meddler” van Roon claimed the blue side vs. red side conversation was over. The sides had been balanced, or so he claimed. Depending on region, van Roon said, the game was evening itself out due to an increased priority on the dragon objective.

Interestingly, 2020 Worlds had a near even split with Blue side winning 50.88% of the matches.

If this was ever true, it was only for a brief amount of time. A major jungle rework came in after this claim from van Roon, effectively making the data moot. Regardless, from solo queue to pro play, from North America to Korea, blue side has maintained that high mark.

This is of course the trickier data to pick apart. With Factor’s POWR stat we can gain a lot of insight into the finesse of League play, but determining the nuances of each side is still difficult.

There are plenty of theories behind this. Riot has done its own part to “nerf” and “buff” sides. Lots of people have pointed to the addition of Scully as a red side bonus, but just as many have pointed out that having an extra crew member bot side still keeps that advantage to blue side. The numbers more or less bear this out, too.

Red side gets plenty of wins, too. It’s not as though having red side is like having your team’s name written in the Death Note. At this level of play, however, any advantage is a boon. It’s like playing in the NBA and having home court advantage: some players swear this is why they win or lose games, while others focus on brushing off their lucky Nikes at home or away.

A few percentage points may or may not be negligible, but the trend is more than just believing in your high school jersey number. League tournament formats involve multiple games for this very reason, or so say LCS commentators who have spent years working at Riot. Since the bouts are played in best of five, or over the course of a weekend, players get, hopefully, a fair shake.

Camera angles have been a popular place to show the discrepancy, too. The game feels more like your game, or in your directional favor, as a blue side champ. This hasn’t been widely tested, and is far from concrete, but has been mentioned plenty of times in this discourse.

One theory that has a causational relationship to the data is that the better the team in general the more likely they are to take advantage of those blue side nuances. This certainly tracks for why the All-Star and LCK games have such higher numbers on blue side: as Phreak would say, they’re just better.

Not to flame Bjergsen, going forward the data speaks for itself. While Alphari rightfully scares any opponent, it’s not worth sacrificing the advantages of blue side to take him down a peg.

Switching up strategies is always a spicy way to try and take a game off of an opponent. Sadly the advantages on blue side are just too heavy to ignore.