After the Durability Update this year, healing and grievous wounds has been in a weird place, the latter becoming especially questionable in its value. Twitter has been ignited with a debate on purchasing Oblivion Orb. In one camp, LS rages on about why an early Oblivion Orb is a waste of gold; in the other camp, Riot Phreak sits alone. 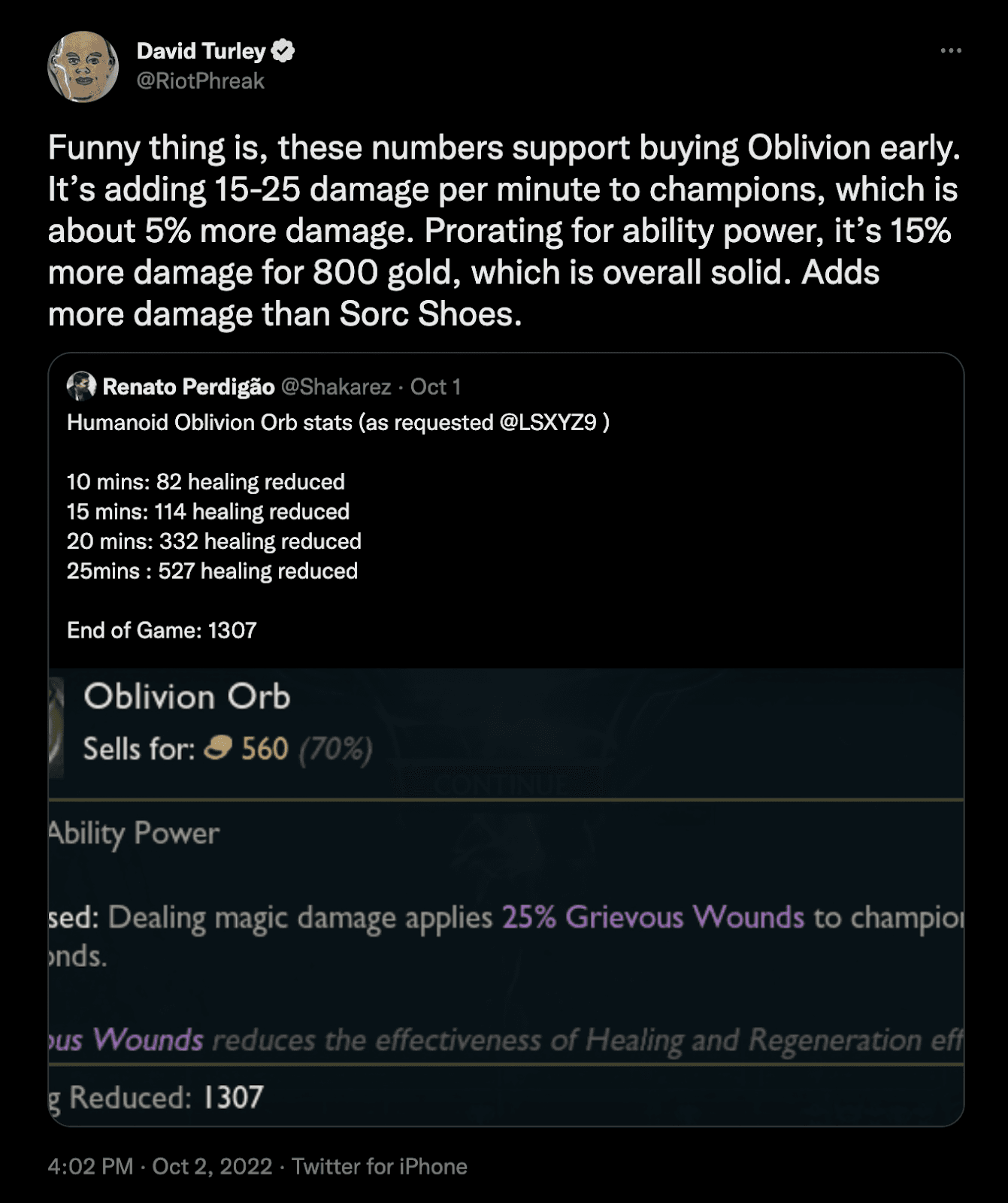 Although I don’t personally have an answer on whether Oblivion Orb is a good buy, it highlights an interesting aspect of the game, and that’s the game theory of item builds.

I’ve already used game theory in some of my previous articles, but I want to add a bit more context on how it applies here. In most “games” the players have not only the knowledge of their own decisions but also the knowledge of how their decisions affect their opponents. It’s about understanding the incentives of the other party such that you can accordingly have the best response.

The simplest way to show this is with the classic Prisoner’s Dilemma. Suppose two people are arrested by police, each for an offense that will certainly net them two years in prison. However, once at the station, police realize these are probably the perpetrators of last week’s bank heist, a crime that would net each ten years behind bars. The cops don’t have enough evidence to outright win the big case, so they offer plea bargains to each suspect separately.

If both confess, they each get six years behind bars. If one confesses and the other does not, the bargainer only does one year in penitentiary, and the other gets the whole twelve year sentence. And, if they both keep their mouths shut, they each only do two years for that smaller offense because the cops can’t win the big case without a confession. 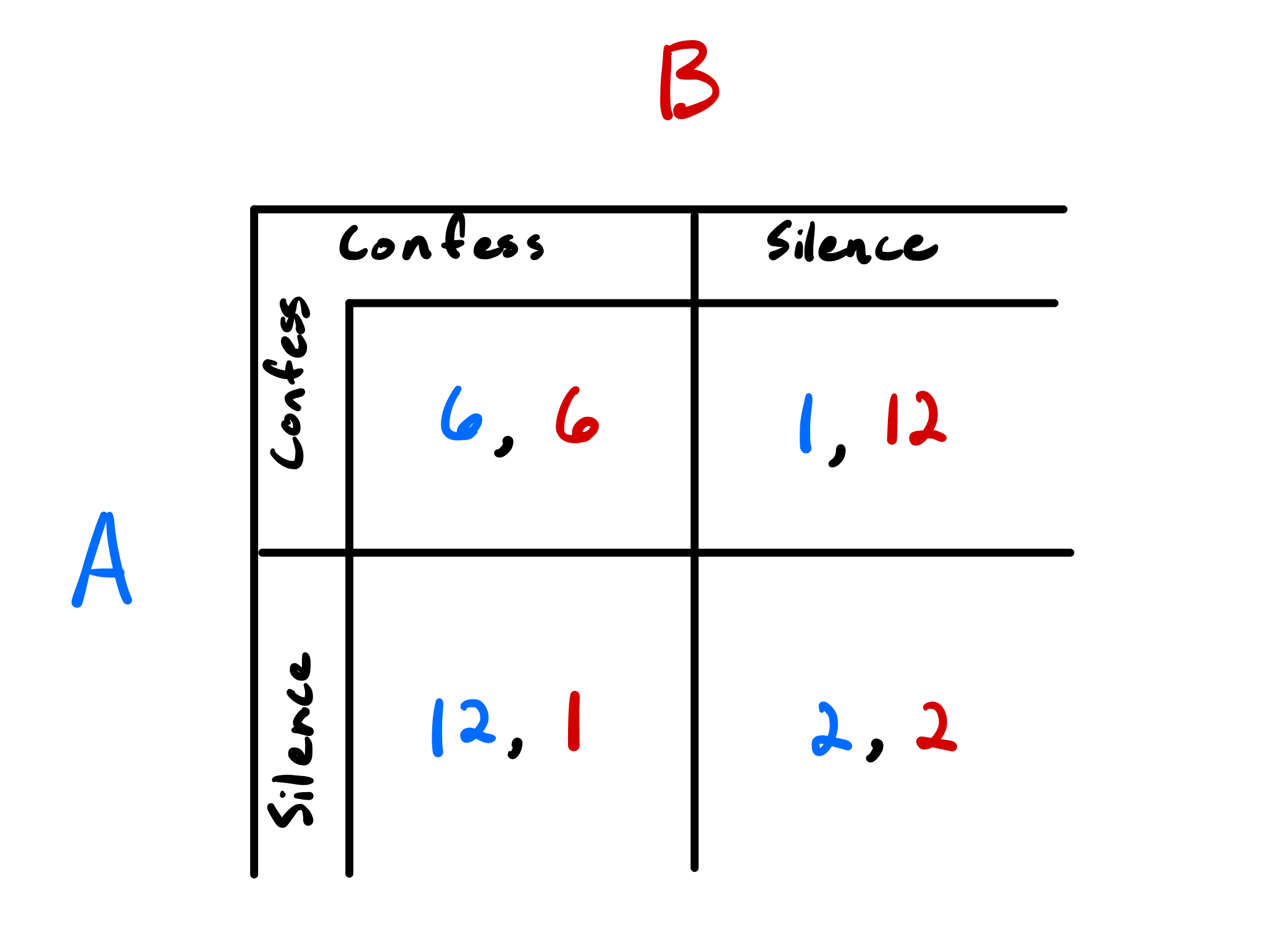 How do the suspects behave?

Although you might hope for some cooperation and solidarity that nets the fewest total years imprisoned, that’s not how this plays out. When we focus on the marginal incentives of each person, an interesting thing arises as we compare the payouts. It is always equal or better to rat than to remain silent. If you are both silent, you can reduce your sentence by ratting. And, if your accomplice rats, it is much better to rat on them as well.

This incentive structure wherein decisions stabilize to a fixed point is something we call a Nash Equilibrium. There can be more than one Nash Equilibrium in a game, but they all have that same attribute of being local optima in decision making.

Let’s take a detour to baseball. It might seem irrelevant prima facie, but it highlights a different kind of game outcome.

As a pitcher, you have to consider a few factors, including the propensity of contact, the payout to the hitter if contact is made, and the payout to yourself if the pitch is elusive. For example, a curveball tight and in has a low chance contact and a pitiful payout for the batter if hit because of where it strikes the bat, but the batter likely won’t swing, meaning you run a high risk of throwing a ball. On the other hand, a change up can be the perfect tee to crank a homer, but the odds of the batter whiffing for a strike are high.

Simultaneously, the batter is also making decisions on what they expect you to throw. Do they wail down the middle, hoping to hit it to the fences? Do they swing low and tight for a sinker? Do they not even swing at all? Although baseball players are exceptional batters, much of that comes from prediction along with reaction.

How do pitchers and batters make decisions on what to throw and how to swing?

What we see is that instead of reaching some specific outcome like we saw in the Prisoner’s Dilemma, pitches and swing strategies become stochastic. There’s a percent probability of each player executing on each strategy, some with higher odds and some with lower odds.

Change ups are rare, and the patient swings to hit them are too, but they both have an appropriate place in the strategies. If pitchers threw no change ups, batters would stop using delayed swings. This would mean change ups become valuable again as batters stopped using the counter. This cycle settles into a probability for each party to use any individual strategy rather than 100% use or 0% use.

That stochastic distribution is what fundamentally separates this scenario from a Prisoner’s Dilemma. No strategy is truly dominant for either party.

How does this apply to League of Legends?

We can deconstruct a League match into a collection of mini games all based around game theory. Some of these are response-based, in which you can look at your opponent’s inventory and deduce their strategy as it develops. Some are blind dice rolls, wherein players each make a choice, only to discover what their opponent picked at the same time.

This is the start to a series in which I’ll dive into a few of these mini games to explain how decision making works and how players are likely to respond in potential meta scenarios.