Welcome to the LCS Championship Edition of the Fantasy Projections presented by Monkey Knife Fight.

It’s 100 Thieves vs Team Liquid for the LCS Championship and the #1 seed from North America for Worlds. In this rematch of a back and forth Winner’s Bracket Finals that finished 3-2 in Team Liquid’s favor, 100 Thieves gets another crack at TL.

Team Liquid has made it to World’s the past three seasons and while guaranteed another trip, this time they won’t be fighting out of the play-ins.

This will be 100 Thieves' second trip after qualifying back in 2018.

100 Thieves looked very strong against Cloud9 in the Loser’s Bracket Finals and hope to ride that momentum into the match.

As a reminder, the Monkey Knife Fight League of Legends games are pretty simple - they pick a few players and you have to choose whether the players will have more or less than their chosen stat.

This is a best of five matchup and we are basing our below projections off a 3-2 TL win, so a total of five games. If you think that they’ll play more or less than that, adjust your choices accordingly.

As a reminder, Monkey Knife Fight uses the following scoring system for fantasy: 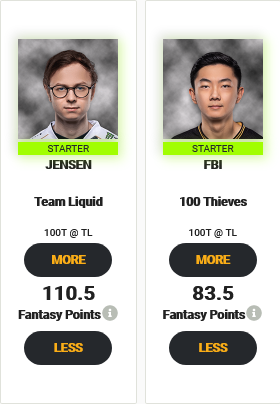 FBI has the third highest POWR of any bot laner and has played well this playoff. If you look back at this previous matchup where 100T lost 3-2, FBI put up 104.54 fantasy points. He has to go big in the two 100T wins to hit this. But if they can win twice, FBI is averaging 31.06 points per win so he’ll be right there.

Jensen is Mr. Steady with the highest average fantasy points in losses this playoffs at 20.84. In a 5 game series, he is predicted to finish with 135.68 fantasy points. 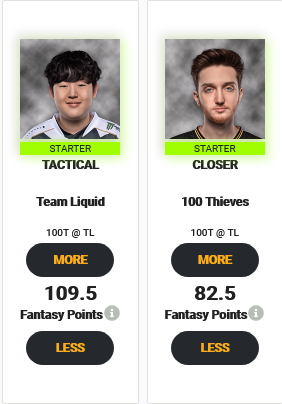 Tactical led the league in Kills and Creep Score this season and is one of those rocks that Team Liquid is built around. When TL has won this playoffs, he has barely died. In their losses, Tactical dies an average of 3.5 times. Oddly his CS is better in losses than wins. He averages 28.58 points per win, and is projected at 122 total points.

100T will need to rely on Closer to make plays if they are to have a chance. He has popped off in wins with 32.36 average points per win, the second highest of the 10 players left. If 100T can win two, he’ll hit his number. 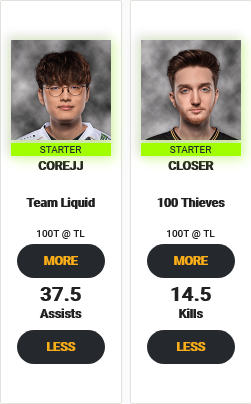 CoreJJ has been one of the best supports in the LCS playoffs and sets up a ton of kills for Tactical and Santorin. He averages nearly 11.5 in wins this playoffs. So even a 3-1 series gets him very close to the 37.5.

When 100T wins, Closer is on top of the kill charts with an average of 5.6 per win. Assuming this one goes the distance again, he should eclipse that kill total. 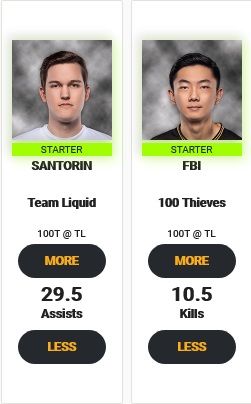 Santorin is one of the best junglers in the LCS right now after taking some time off this summer. He sets up a lot of opportunities and averages 7.6 assists in games these playoffs regardless of result. In his wins, he’s averaging nearly 8.8 which puts him almost at his amount if Liquid only sweeps the series

In 100T victories, FBI will get kills especially cleaning up after Closer and Abbedagge kick off team fights. However, 100T has to win at least one game for him to hit his number. If you think they don’t get swept then go More.