Welcome to the first week of Fantasy Projections presented by Monkey Knife Fight.

Today, we’ve got the first day of the 2021 LCS Playoffs and a best of five matchup between Evil Geniuses and Dignitas. EG comes in red-hot as the three seed after having tied for the best record in the summer split. They have members who are first and 2nd team all-Pros by the LCS and Factor has all five players as the top ranked at their position. Dignitas, however, has EG’s number on the season taking the head to head battle. This one will likely come down to who makes less mistakes.

The Monkey Knife Fight League of Legends games are pretty simple - they pick a few players and you have to choose whether the players will have more or less than their chosen stat.

You can also get a free $5 game as a new Monkey Knife Fight user if you sign up at https://play.monkeyknifefight.com/factor.

This is a best of five matchup - which means the teams can play a max of five and a minimum of three games. We are basing our below projections off of a 3-1 EG win, so a total of four games. If you think that they’ll play more or less than that, adjust your choices accordingly. 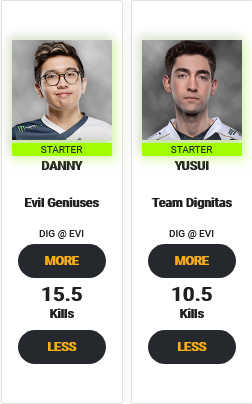 Our first game pits Danny has been on-fire all summer and is likely the rookie of the split in the LCS. Danny has led EG in average kills this summer with 4.12 per game and in wins he’s averaging 5. As the bot laner, he’s expected to carry, and the young gun has proven he can.

For Yusui, as a mid laner, he’s going up against an LCS all-pro and potential MVP in Jiizuke. He’ll have his work cut out for him. However, his average kills per game is 3.65 and he’ll have to go big in the one DIG win this series. 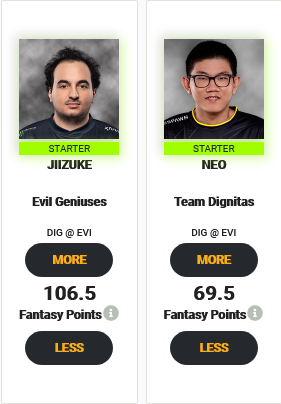 Based upon the scoring system for Monkey Knife Fight, players are awarded 3 points per kill, 2 points per assist, -1 points per death, and 0.02 per creep score.

Jiizuke has been dominant in EG wins and abysmal in their losses. If the series goes as predicted with a 3-1, Jiizuke will get the kills he needs to drive up his score. In EG losses, he’s farmed more but has a worse stat line. Our averages have him right at 106.9 over 4 games. Based upon recent bans though, teams have taken away many of his go to champs and so it may be a tough number to hit. NEO has been terrific when Dignitas can pull out a win but even in losses, he’s been an important enough player to average over 15 fantasy points per loss. He’ll be in a tough bot lane against Danny and Ignar but should carry hard enough in the Dignitas win to blow past 69.5 points. 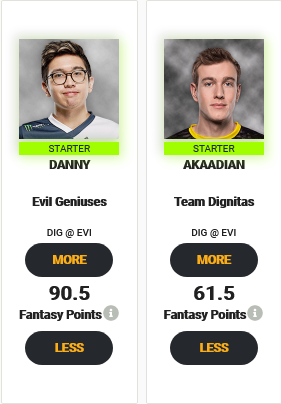 We’ve touched on Danny already but Akaadian has been a recent stalwart for Dignitas helping them finish 6th. His play in the jungle is exemplary in wins. Coincidentally, these two have nearly identical fantasy scoring lines in their wins and losses. Danny has averaged 32.86 points per win and Akaadian has 32.35. In their losses, Danny has averaged 14.85 and Akaadian is at 14.53. 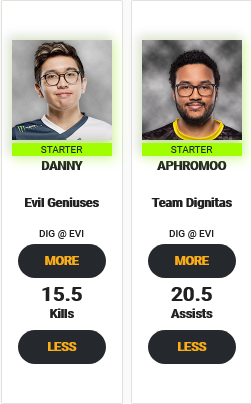 Another Danny prop, but this one is fun because you have the rookie paired with the ultimate veteran in Aphromoo. Aphromoo is an important part of any Dignitas win and has helped them grow their younger core this year. His numbers are up this year and he’s a support player who is in on the action so he racks up assists. With Dignitas projected to get one win here, he’s averaging 12.25 assists per win in summer so it’s likely he should ecplise that 20.5 assist mark.