Welcome to the second week of Fantasy Projections presented by Monkey Knife Fight.

Today, we’re focusing on the battle of LCS stalwarts for a Worlds qualification spot for the LCS, TSM vs Team Liquid. Either TSM or Team Liquid that has won the Summer Split in the LCS every year since 2016. Team Liquid has had a lot of changes with their roster this season but seem to be hitting their stride with Alphari and Santorin back. TSM has been at or near the top of the LCS all-season and are led by Spica who is one of the frontrunners for the LCS MVP. Factor has Team Liquid taking this one but it’s close, they only have a roughly 57% chance of taking the series.

As a reminder, the Monkey Knife Fight League of Legends games are pretty simple - they pick a few players and you have to choose whether the players will have more or less than their chosen stat.

You can get a free $5 game as a new Monkey Knife Fight user if you sign up at https://play.monkeyknifefight.com/factor.

This is a best of five matchup and we are basing our below projections off of a 3-2 TL win, so a total of five games. If you think that they’ll play more or less than that, adjust your choices accordingly. 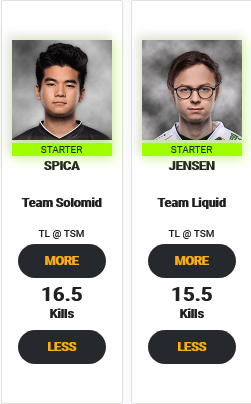 Spica and Jensen are two of the top players in the LCS, Spica is up for MVP as previously mentioned and Jensen was one of the best mids in the Spring split. They each have a KDA of 4.5 and 4.4 respectively. 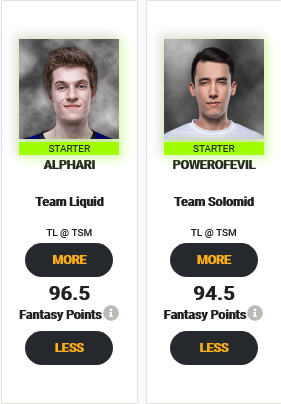 Based upon the scoring system for Monkey Knife Fight, players are awarded 3 points per kill, 2 points per assist, -1 points per death, and 0.02 per creep score.

Alphari was possibly the best player in the LCS in the Summer Split and is finding his form again after missing some games early this split. As a toplaner he will likely get his farm but will have to rely on kills to to drive up his score

PowerOfEvil is the top Midlaner right now in the LCS based upon POWR and will likely get his farm but averages nearly 20 less minions per game than Alphari. He’s a mid who will find kills though. 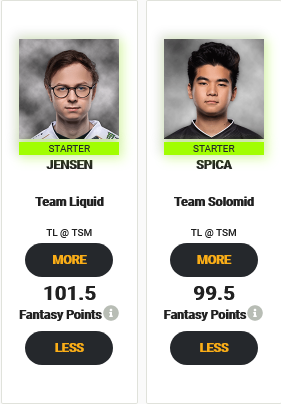 Another matchup between Jensen and Spica. With how strong and impactful the Junglers have been, Spica will have to make plays for TSM to have a chance which could mean riskier play. Jensen is a farming beast with the second highest average CS for the 10 players in this match. 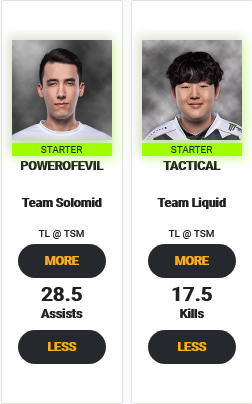 Tactical is one of the top ADCs in the league and leads the league in both kills and creep score. He’s a bot lane menace who has over 30% of the Kill share and Damage share for his team. If he gets Aphelios or Varus, watch out.

PowerOfEvil has done a terrific job in mid taking over for Bjergsen and with a 70.3% Kill Participation he is in or around nearly every kill TSM secures which could give him a chance at reaching that assists mark, especially if this goes 5 games.