“We'll need to adapt fast when we get there and get to scrim the Asian teams. The meta is by far the most important thing that we need to figure out.”

Rogue have finally made it to the LEC hall of champions. After two prior appearances in grand finals, both of which ended in defeat, the team overcame their hurdles and beat Fnatic and G2 to claim the crown. Now, they head to the 2022 League of Legends World Championship as Europe’s first seed, taking on Top Esports, GAM Esports, and a team that will qualify through the Play-In Stage in Group C, where the top two teams will advance to Quarterfinals.

Ahead of the mayhem, Rogue mid laner Emil “Larssen” Larsson reflected on his first LEC championship. He discussed why Rogue were able to bounce back so convincingly and what the stadium environment changed for him as a competitor. Larssen also looked ahead at Worlds 2022 to evaluate his group and what Rogue need to do in order to advance to the Knockout Stage.

Welcome, Larssen, and congrats on your first LEC title. I remember that, during the post-finals press conference, it hadn't quite sunk in yet for you guys that you actually won the LEC. Has it sunk in now?

It has sunk in more, yeah, definitely. It hasn't sunk in 100% yet, but two or three days after, like Tuesday morning, I had a very good feeling about it. It still feels a bit surreal that I played in such an arena and that we stomped them. I think the fact that we stomped both Fnatic and G2 makes it a bit more surreal. It was not even close. Maybe if it had been more close, then it would've felt more real, but it all went by so fast. [Laughs]

I do want to quickly touch on something specific from that weekend. As you said, it was mostly very dominant from Rogue, but you did get beaten quite convincingly by Fnatic in the first game. After that, you just banned Sylas and went on a streak. Was such a simple adjustment also a mental turning point?

Sylas was a good ban, but I think we played insanely bad in every lane in game 1. We were losing everywhere. When I came out of that game, I was still very confident. I felt extremely good on the stage, but I was a bit worried that we would keep playing bad games like we did in the week before. But I also thought: "Oh, nice, we all got our ints out of the system."

“I hope I get more respect now. I also feel like I've been a bit underappreciated the past few years, but it's not something I care too much about.”

There was a clear shift in the team's performance when we compare pre-Malmö games to the ones played in the stadium. During that weekend, you all said the team atmosphere had gotten much better. How do you look back at that change?

I'm not sure what changed. [Laughs] A change of the environment, I guess. We also didn't scrim too much, which was nice because we were losing a lot of scrims. I'm not completely sure. I guess it's human that, when you change the environment, it's a completely different feeling compared to when you're playing in the studio. You go to Malmö, you see the stadium, whereas for three years now I've been in the office, going to the LEC studio. It's very monotone. Now, everything changed. You travel together to a different country... it's just a complete change. I think winning the finals helped a lot with the atmosphere in the team now. The atmosphere of winning the finals is still here, it's a good atmosphere. 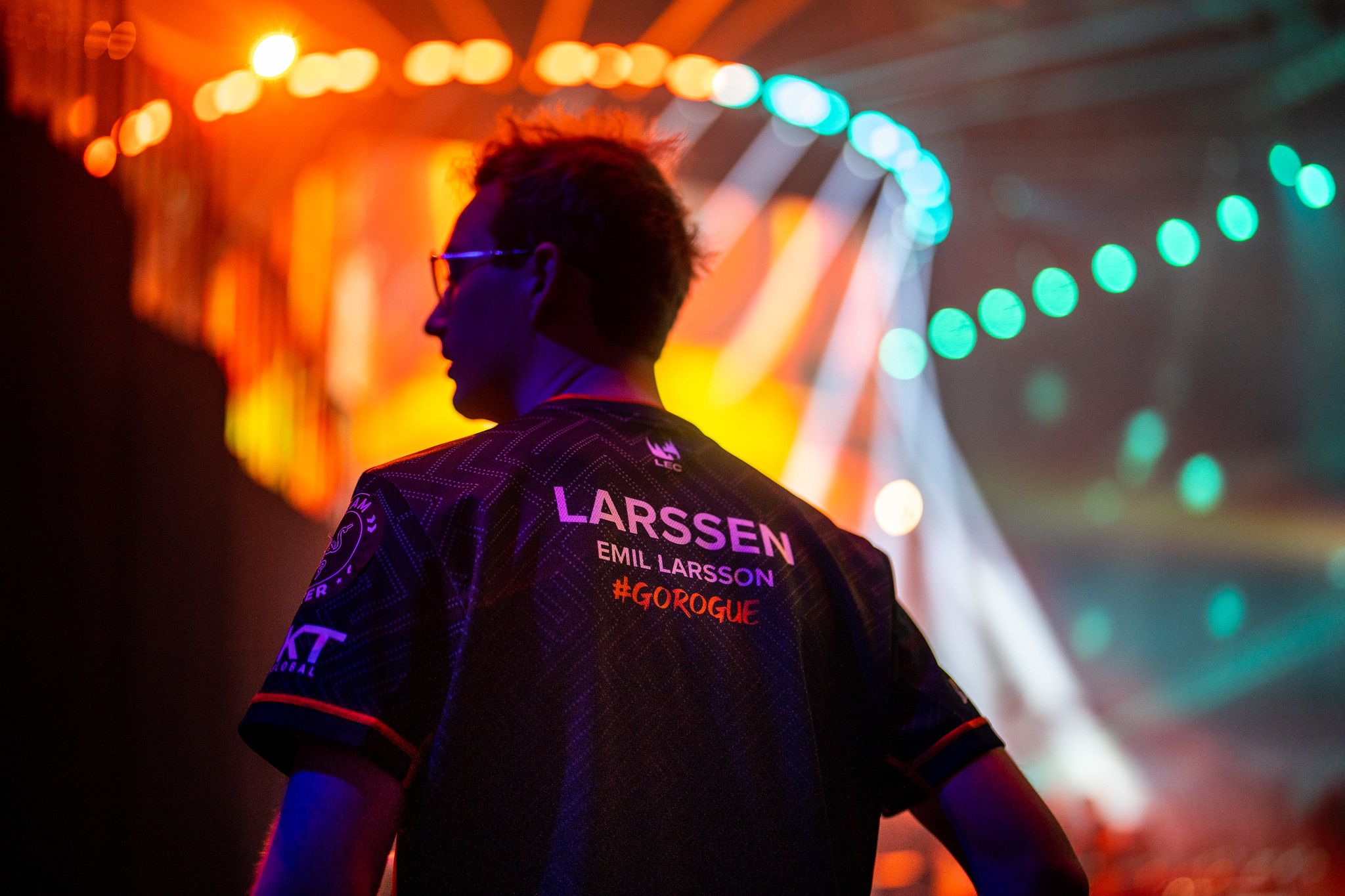 You're a very calm guy, but then again, so is Trymbi, and we saw him pop off—

[Laughs] Right. But still you seemed very focused and grounded, also in the snippets of voice comms we saw of the final weekend. Did you have any doubt that you would be able to withstand the grandeur of such a podium?

It was the first time in an arena like that for a lot of us, yeah, at least for Comp, Trymbi, and I. I think Malrang played in a decently big arena in Turkey. But obviously, I was not sure how I was gonna react and how my teammates would react. I knew that the change of environment would be good for us, but I didn't know how good it would be to play in an arena. I was very excited for it, but it was not like I can know how I will react when I've never played for it.

In my head, I felt like it would be completely normal to be nervous in front of such a big crowd. But the complete opposite happened. I, and I think my teammates as well because they played very well, just felt insanely comfortable with the audience. When they were cheering, I felt like the nerves just disappeared somehow. I mean, I wasn't sure coming into it. Coming into the weekend, I knew we could beat Fnatic and G2 convincingly if we played to our highest level. I also knew that we could get 3-0'd if we played on our bad level, which we saw the week before. But even when we got 3-0'd by G2, I knew that we could 3-0 them if we played to our higher level. The games were very winnable, but we played very badly.

“I felt like it would be completely normal to be nervous in front of such a big crowd. But the complete opposite happened.”

When I look at the public perception of you, it seems like people acknowledged that you were a solid mid laner, but you were never "one of the greats". Do you think that will change now that you have a title?

I hope so! [Laughs] I try to avoid social media. I watch some, but I hope I get more respect now yeah. I also feel like I've been a bit underappreciated the past few years, but it's not something I care too much about. I mean, you can care about it. It can be important what the public thinks and what narratives are there. I hope they respect me.

Earlier you mentioned your "highest level" and I think that many eyes will be on Rogue for the upcoming World Championship. First of all: what do you think of your group? You're in Group C with LPL's Top Esports and VCS's GAM Esports. And, if DRX makes it out of the Play-In stage, they'll be in your group too.

I'm very happy with our group. It can always be better, but it can also be a lot worse. I was just hoping that we wouldn't get a group of death like C9 did, with T1 and EDG. [Laughs] That would be the most unlucky. I was praying at the LEC afterparty to not get both of them. It's fine if we get any group, besides those two teams. Then I would actually be mad. We've been very unlucky with the group draws in the past two years, so I would be mad if we got unlucky again, now as the first seed. But C9 took the bullet.

I'm happy with the group, but against any Chinese or Korean team you will get stomped if you don't play well. If you play well, you can win against anyone. So it's up to us. 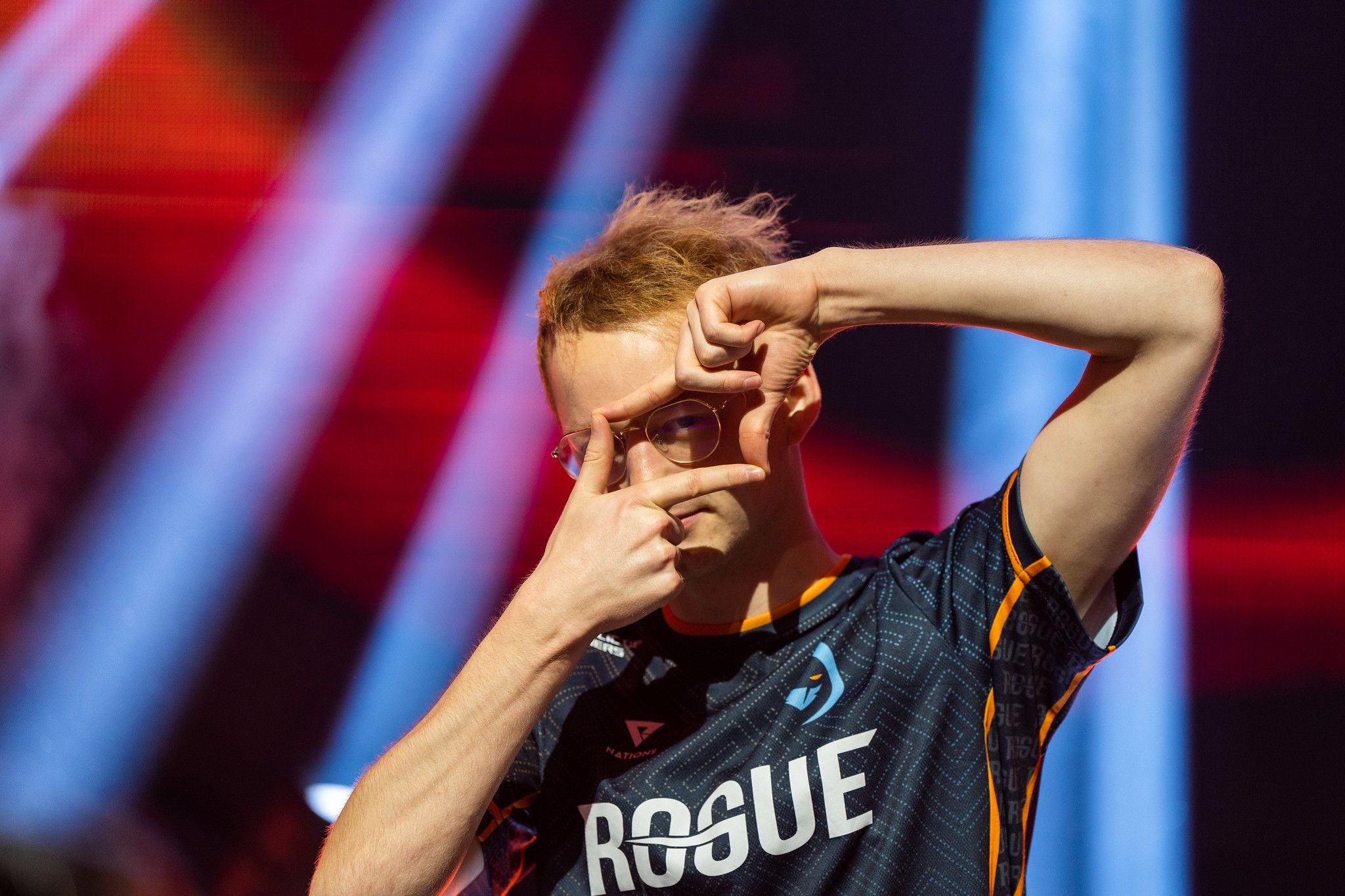 Do you think that the level of play you showed against G2 and Fnatic is already good enough to beat teams like Top Esports? Is that the highest level of Rogue?

You still have some time before you play. What is the focus on now? Fixing any gameplay issues, scouting opponents, figuring out the meta...

The focus is on the meta. Meta, meta, meta. We need to find out what the meta is. Sadly, we are not scrimming any Asian teams until we go to America. We won't have too many days with the Asian teams, like in the past Worlds. We'll need to adapt fast when we get there and get to scrim the Asian teams. The meta is by far the most important thing that we need to figure out. We need to try to gain info from the Asian teams already. See what they play in solo queue and stuff.

“We'll need to adapt fast when we get there and get to scrim the Asian teams. The meta is by far the most important thing that we need to figure out.”

Historically, though, Rogue has been pretty good at figuring out the meta at the start of LEC splits. This Summer Split was an anomaly in that sense—

We also had quite some bad meta reads for playoffs. [Laughs]

[Laughs] Right, but for those best-of-one environments it was generally spot-on. So, who are you scrimming against now to figure out the meta?

It's just the other Worlds contenders. We'll also be scrimming a team that we've put together.

I think that's the plan. It's not every day that we get an LEC team, so we're trying to put together an LEC team.

You're roster-building for other teams. [Laughs]

[Laughs] Yeah, you can call it a superteam.

Oh no, please not another superteam! Well, to round up Larssen, is there anything you'd like to say to your fans as you prepare for the World Championship?

Who Will Win Worlds 2022? Our Experts React to Factor's model