"T1 isn't going to be easy to play against, but just like us, they have their weaknesses. I have a plan...."

One day later, C9 was shellacked by 3rd League of Legends Pro League seed EDward Gaming. After an 0-2 start against the 3rd seeds from Europe and China, Cloud9 will face off against 2nd League of Legends Champions Korea seed T1 in an attempt to avoid a winless week 1 in the Worlds 2022 group stage.

After losing to EDward Gaming, Cloud9 support Jesper “Zven” Svenningsen sat down with Factor at the Hulu Theatre to break down C9’s first two losses of Worlds 2022, the emphasis on importance of team play in the current meta, and why he thinks his team’s drafts have been their biggest weakness through their first two games.

It's difficult to start Worlds off with two losses, but has there been anything C9 has learned from these games?

In our first game against Fnatic, our draft was terrible. Even if we had an early game lead, we couldn't win 5v5 and we could never fight dragons. I think draft has been our biggest issue so far. In the EDG game, draft obviously wasn't THE issue, but often, when we are falling behind in these games, we don't have a way to win. We have no CC or real engage and our whole team comp fell apart after one mistake against EDG.

I think our comps are just a little bit too mismatched. They don't have much synergy together as a whole, so that's an issue. I think that our play right now is also not super good, either. We don't really have much going for us right now.

Do you think C9 has still been picking strong champions but just not in the right composition or was the team's read on the meta heading into Worlds 2022 incorrect on the whole?

At some point, we couldn't win any 5v5s. We were playing Nautilus, LeBlanc and Miss Fortune against two big tanks with Renata, so we didn't have any damage to kill tanks and we couldn't win 5v5. We had an assassin, a split-pusher, and a teamfight ADC in the same team comp – that doesn't make any sense, right? That was our biggest issue in that game.

In today's game, draft wasn't the reason we lost, but after just one mistake in the early game, our comp suddenly had no purpose. We couldn't win sidelane matchups because the game fell apart early on, so it was a little bit to do with everything.

When you're a 1st seed, you only scrim against the best teams from every region and you lose a lot of games; that's how it is. At that point, you don't know what your best draft is or what's good for you anymore. It's hard to judge what you should be playing on stage because you don't really win with anything anymore.

As an AD carry, you've mentioned the jump between domestic AD carry competition and international AD competition. Have you found that the support role has a similar jump in skill once you get to the international stage?

Our group has some of the better bot lanes – both supports and AD carries – than most regions. A lot of people would say that while Fnatic is the 3rd seed from the LEC, their bot lane is arguably better than the 2nd and 1st seed teams. The same goes for EDG and T1 — they didn't win their regions, but their bot lanes are really good. I obviously have a lot of respect for them, but so far, I don't think we've determined the bot lane to be anything out of the ordinary. We've held our own in lane.

We had a losing matchup against Fnatic and we had a winning matchup against EDG, and in both games, I thought we were doing fine. Both bot lane matchups went sort of as expected. I don't think laning phase prowess is that important in this meta. It's more about team play. There aren't going to be that many solo kills or 2v2 kills that lead to someone carrying the whole game.

It's more like when Fnatic beat T1 earlier today. The laning phase is what it is, then Oner made one mistake and dies. Keria tries to help him and dies as well, and now, bot lane is over. That doesn't mean Fnatic's bot lane necessarily played better though, right? The 3v3s, 4v4s, and map plays are more important than the actual laning phase in this modern version of the game.

To clarify, you're saying a bot lane can win the 2v2 for 95% of the laning phase, but if the losing bot lane's team executes a superior team play, that 2v2 advantage is rendered irrelevant?

Yeah. We watched Fnatic's game against T1 today before our match. Fnatic was winning the first level, then Upset got hooked and had to take a bad trade. His wave was in a bad position, while meanwhile, Oner was in Razork's face taking buffs from him and winning jungle. T1 had a lot of pressure in both bot and jungle, and by extension, mid lane as well because they had pressure in two other roles at once.

Then, Oner makes a mistake; dies, Keria tries to help him as well and dies, and all of a sudden, Lucian and Nami had a double kill, double buffs, and a First Blood. Lucian/Nami is a bot lane where it's good that everyone gets gold quickly because of how overpowered Imperial Mandate is once you get it in the early game.

At that point, Fnatic then stomped the bot lane but the point is that Fnatic lost the 2v2 and the 1v1 in jungle, but they got a good team play 3v3, and therefore, they won. The whole game was snowballed by that single play. My point is that the 2v2s and the 1v1s aren't as important as the team play.

Do you think this trend is something particularly emphasized by this meta, or is this more due to the general direction of where League of Legends as a game has headed in recent seasons?

I think that the Chinese and Korean teams understand how to pressure lanes very well. I don't think that Jensen got smashed 1v1 in mid lane today, but he died to a gank and EDG's Thresh was there to get the follow-up kill on Blaber. Suddenly, they have two kills across their mid and jungle. If Viktor has no flash in the matchup against Azir, he can't lane. He will just die.

A big part of all of this is understanding the matchups and providing information or help at the right times, and I think EDG probably did that better than us today. I haven't watched the games back yet, but I'm assuming they played better today around that condition. 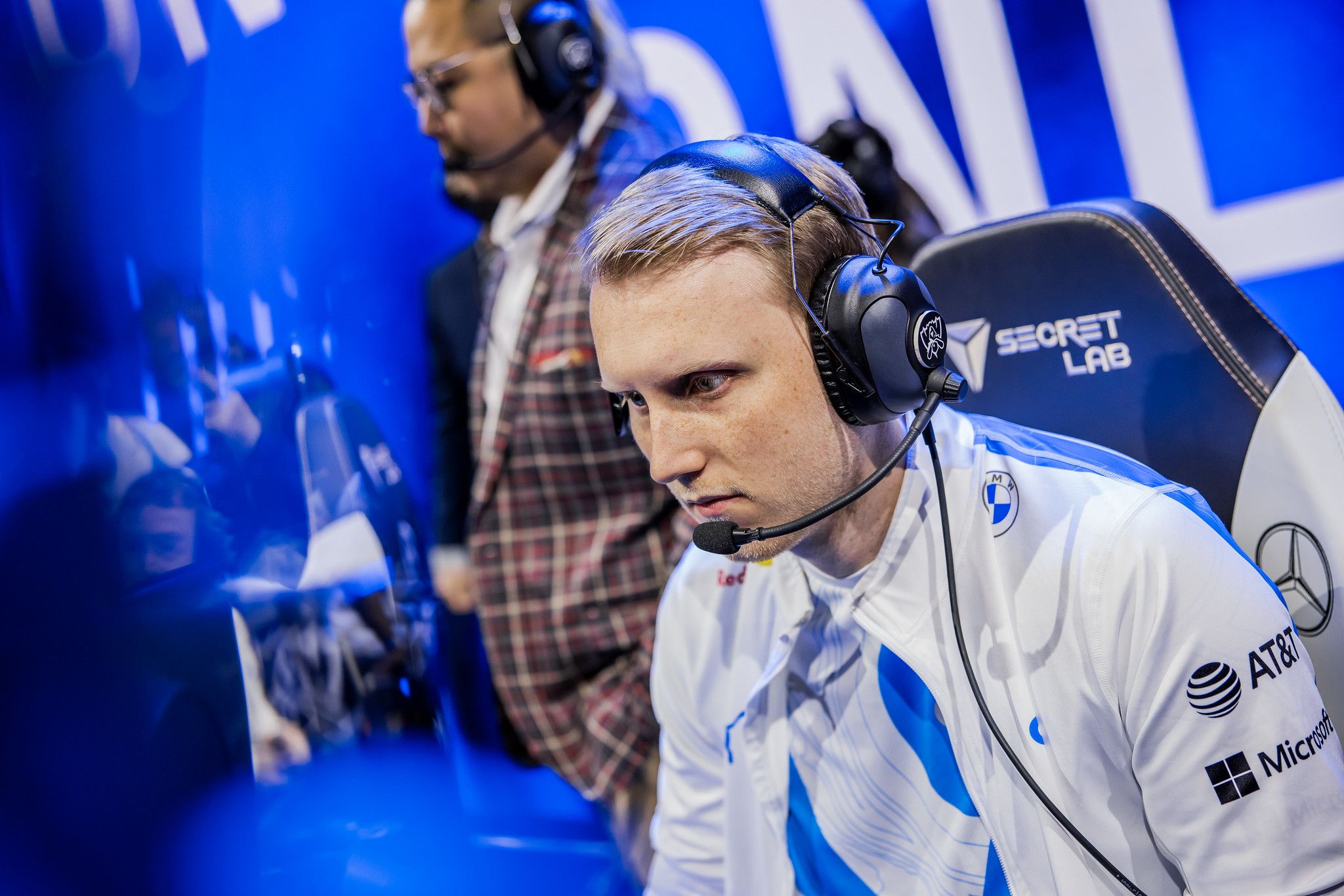 Analysts have spoken about the support meta returning to a champion pool more focused on melee supports, but we've still seen teams find success with picks like Nami and Yuumi. How would you describe the current support meta?

This summer, enchanter supports were more prevalent because they were just better. Yuumi, Nami, and Lulu were just better than the other alternatives, but now, if you want to play Leona or Nautilus, you can. If you want to play more defensive melee supports like Thresh or Tahm Kench, you can. If you want, you can also play Yuumi, who is still strong and banned in a lot of games.

We also saw Lucian/Nami work for Fnatic and Rogue today; it's not as overpowered as it was before, but it still works. Even Renata works, so there's a lot of stuff to play and you can kind of play whatever you want. I wouldn't say there's one style of support that's better than the other right now, it just depends on what your team needs.

Your next matchup in Group A is T1, who have shown a strong level of play but, as proven today by Fnatic, are not unbeatable by any means. What are your thoughts heading into that matchup and how specifically do you think teams should be attacking T1 to expose their weaknesses?

T1 looked kind of bad versus Fnatic, but I think they were out-drafted in that match today. Also, I wouldn't say they were unlucky, but they were winning both jungle and bot lane. In a way, Fnatic kind of got bailed out by the 3v3 situation that happened and it really saved the game for them because the early game was looking really bad for them before the 3v3. It was a really easy situation for Oner to prevent.

T1 isn't going to be easy to play against, but just like us, they have their weaknesses. I have a plan, but I can't say that here. I don't think T1 is looking that insane, they are just a fundamentally good team. They have good macro, they have good players, and they don't really make mistakes anywhere besides the one they made today. I think that it will be tough from here. We need to fix our drafts and our early game, but I think we can do it.

The chips are down, but historically, Cloud9 have overcome greater odds. Is there anything you want to say to the C9 fans?

It looks rough, but last year, we started our group 0-3 and still made it out. Anything that happens in week 1 can be undone in week 2. At Worlds 2015, NA was winning all of their groups in week 1 and then went 0-10 in week 2 – it can go the other way around, too. It's not over until it's over.