How to Play Monkey Knife Fight - League of Legends

Do you consider yourself a stat master in League of Legends esports? Are you the type that studies player matchups? If so, it may be time for you to check out one of the fastest growing Daily Fantasy Sports sites called Monkey Knife Fight. MKF’s selection of games may just be what you are looking for to spice up your esports game watching experience. Here at Factor, we have tools to help you win! Whether you want to play for small amounts, or tons of cash, use promo code FACTOR to receive a 100% instant deposit match up to $100! Any first-time deposit up to $100, MKF will instantly match it and you’ll have twice the money to play with!

There are three main types of games on Monkey Knife Fight. These three are as follows: MORE or LESS, Rapid Fire and Stat Shootout. Let’s go over all three and how they relate to League of Legends.

MORE or LESS is a pretty simple game, does a player get “MORE” or “LESS” of a certain statistic type? For instance, you may get shown two players: Rekkles and Inspired and a set of stats: Kills, assists, Fantasy Points, etc. In this case, it’s kills. If you think Rekkles will get MORE than his 17.5 kills number? Select MORE. Think Inspired will get LESS than his 16.5 kills number? Select LESS. Get both right and win! MORE of LESS can also sometimes have more than 2 options. In these games, you win way more if you get everything correct. 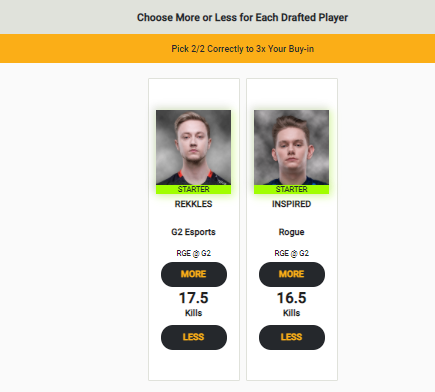 This is where Factor’s advanced statistical data comes in. For instance, if the MORE or LESS is on IgNar’s assist versus Team Liquid, the Duo Proximity might be a stat that is of interest. Is he roaming more than normal versus the superstar support CoreJJ? Maybe he is staying Bot and trying to punish Tactical for CoreJJ’s roams. This is a question that only Factor has the answer to as it’s the only place to find Duo Proximity stats. What if the MORE or LESS is on Impact’s kills versus Dignitas? Well, Solo Kill percentage might be a stat worth looking into and can only be found on Factor. Furthermore, if you want even more data on how the matchup has played out previously, the Playback View on Factor has every key moment and the movement of every player. Want to see the setup for a dive or when Dragons were taken, it’s there down to the second. Take for example Game 3 of Evil Geniuses versus Cloud9 in the LCS Playoffs. With Factor one can even see Jungle camp stats like how Svenskeren killed raptors at 24:43. There isn’t a place on the internet with stats than Factor that give you a better chance to have an edge winning cash on Monkey Knife Fight.

Factor’s advanced statistics help out Rapid Fire players as well. On Factor, one can compare previous T1 versus Gen G matchups and see how the head to heads went. Take for example the Faker versus Bdd assist Rapid Fire question. We can see that in Game 1 Faker had less assists, but in games 2, 3 and 4 Faker had more. Factor provides the best data on the internet for head to head matchups to give the player an edge in Rapid Fire.

The last game, Stat Shootout, allows players to draft a team to accomplish a certain stat goal. For example, it could be drafting a team of players to exceed a certain amount of kills. The better players you draft, the less you win. The key to this game is walking the line between risk and reward. Sure, sorting by most kills on Factor will show who gets the most, but that will decrease the reward significantly. Factor can provide help to Stat Shootout players by finding those hidden gems. Factor has a POWR ranking system that sorts players by a combination of every stat out there. For example, Lost is ranked 10th of all players in the LCS. This might be a player worth looking into for certain Stat Shootout challenges.

Using Factor’s data is a great way to give yourself a leg up in Monkey Knife Fight and with Worlds 2021 coming up, it’s never been a better time to sign up.