...compared to China and Korea, NA – and also Europe – don’t really pay too much attention to these details.

The path of DWG KIA top laner Jang "Nuguri" Ha-gwon to the 2022 League of Legends World Championship is a path less traveled, to say the least. After a disappointing finish to 2021 with League of Legends Pro League squad FunPlus Phoenix, Nuguri took a break from professional play for the first half of 2022 before returning to the DWG KIA, the squad he began his career with and won a World Championship with in 2020.

DWG KIA have begun the group stage of Worlds 2022 2-1, and after their third game – a win over League Championship Series 3rd seed Evil Geniuses – Nuguri sat down with Factor at the Hulu Theatre to discuss busting out his signature Jayce against EG, his team’s performance at the tournament thus far, and North America’s international struggles.

What was DWG KIA’s game plan heading into the match against Evil Geniuses? Did the match go as you expected?

First, the draft was pretty tough for me, maybe because of my narrow champion pool. Hecarim’s typical play is to base and then rush top, so that was pretty obvious. At the same time, Jayce has weaknesses that were really obvious to our opponent and their execution was really on point. While I was playing, it was so uncomfortable, which was maybe because of our draft and comms.

Let’s talk more about the Jayce pick. Jayce has been one of your signature champions throughout your career, but he hasn’t been played before this at Worlds 2022. Were you put in a situation you didn’t expect in draft and fell back on comfort, or were there specific conditions you were looking for in the draft to play Jayce?

It was mostly due to my opinion. I was pretty vocal about this Jayce pick. I was coming to the stage today thinking like, ‘I gotta try this today.’ Also, I trusted that my teammates were going to do great on the other side of the map. After we lost to JDG, I thought a lot about champions and I thought that trying out this Jayce pick would be really good for our future, so I wanted to give it a shot.

Were there other adjustments you team made after the loss to JD Gaming in addition to the Jayce pick?

I cannot really go into the details because there are so many games to play. As time goes by, we will get to play more games and have a better read on the tier list, as well as what picks are going well for us. I think it’s getting better with time.

North America has been heavily criticized for their performance in the group stage of Worlds 2022 so far. Are there specific things about the regional playstyle of NA that you think are holding LCS teams back in performance when compared to the other major regions?

I think it’s mostly about the details of the laning phase. The regions of China and Korea really, really focus on all of those small quirks. There are small details that you have to execute upon during the laning phase, but compared to China and Korea, NA – and also Europe – don’t really pay too much attention to these details. Those kind of little things actually stack up and it ends up being a huge snowball.

At the same time, when they are grouped up, NA and EU are really good in teamfights. Also, they are really good at drafting a composition with a specific strength. In that aspect, their teamwork and teamfighting are really on point, but I think it’s mostly because of the fact that they are constantly slightly losing in lane. 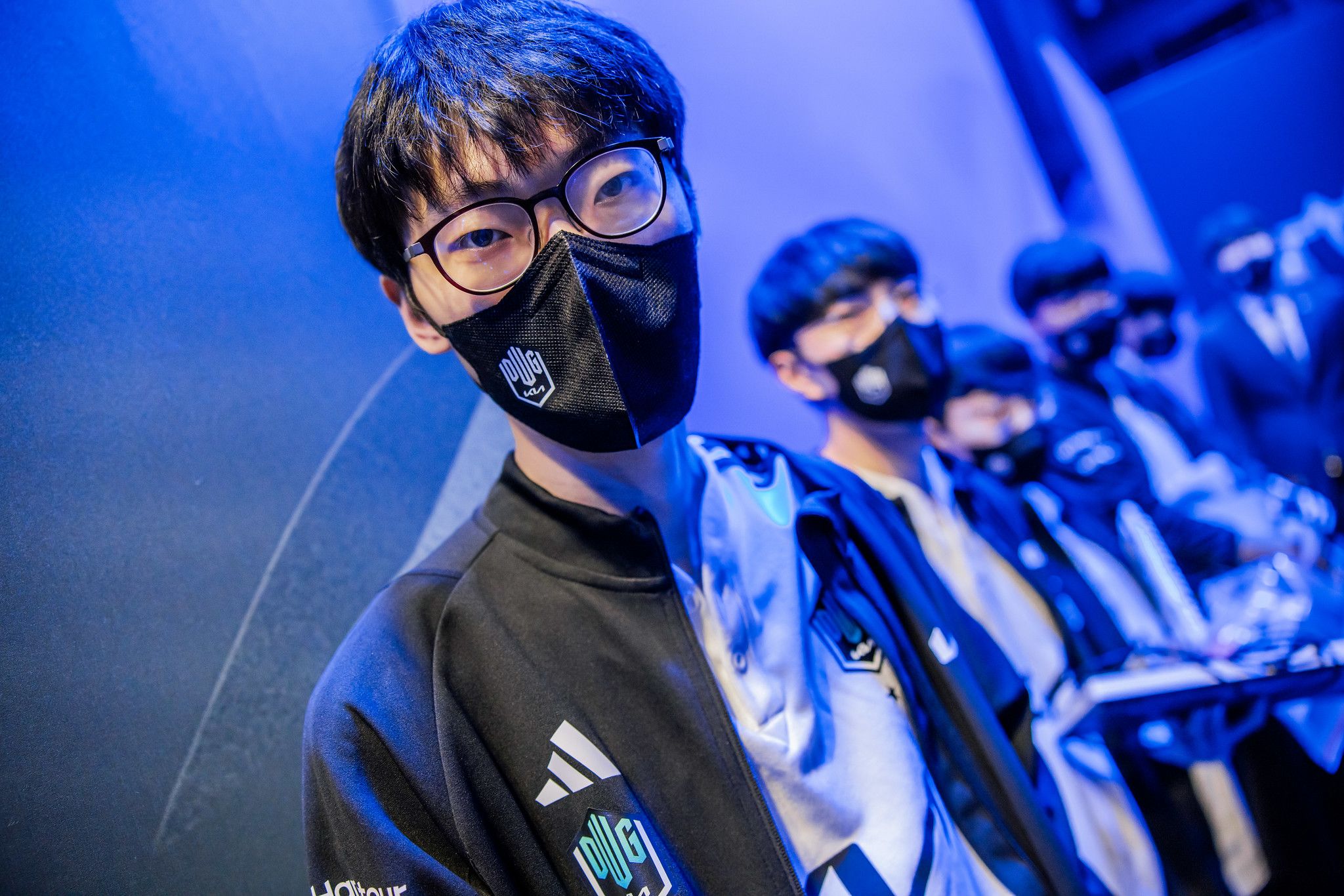 When you first re-joined DWG KIA this summer, did you expect to be in a position to compete at Worlds 2022, and how do you think you’ve played at Worlds so far after your return to pro play?

When I first joined DAMWON KIA again at the beginning of summer, it was looking pretty good. I trusted my teammates 100% that we were going to get to Worlds; I can say I was a bit responsible. I was stressing a lot then, so I was focusing on my own performance and form. I was struggling a bit right after the durability patch, but overall, things were pretty good.

Regarding my performance in the first three games of Worlds, I think there are a lot of problems right now. I feel like I’m disconnected from my team, especially in the mid and late game. I kind of have my own plan and my team has theirs. Sometimes, we cannot find a consensus, so we really have to work on that.

At your first international competition, you won the hearts of many new fans with your signature Kleptomancy picks. Are there any surprise Nuguri picks we should expect at Worlds 2022?

I have some signature picks, and today, I played one of them based off of my confidence on that pick. I’m looking over my signature picks and I’m also trying to find which champion best connects with my team. I want to focus on practicing these champions to try on stage for week 2, but I cannot say what they are. But yeah, I want to do my best on preparing those picks.

I’m sure everyone will be waiting with baited breath during your next draft. Thanks for your time, Nuguri, is there anything you’d like to say to the DWG KIA fans after the first week of the Worlds 2022 group stage?

I’m not quite sure what the fans watching think about our performance right now, but for me, it looks really unstable. It’s so up and down, but we have quite a bit of time. I hope we can stabilize, solidify our play, and bring the best performance possible in week 2.

Even here in New York, we are getting so much support from the fans. The live audiences at the venue are supporting us like crazy, so I really appreciate that. I hope that we return to the stage with great results.