“For me, it’s about searching for future talent for Dignitas...”

Over three months ago, League analysts were debuting their 2021 power rankings, and while there were a number of blows traded, especially in regards to the placement of the middle-of-the-pack teams, the consensus on the bottom three were rather consistent: Golden Guardians, Immortals, Dignitas. The lock-in tournament provided further justification for the power rankings too with Dignitas, Immortals, Golden Guardians, and an incomplete Counter Logic Gaming tying for worst record in their respective groups. Fast forward to the present and the regular season standings aren’t exactly what we expected them to be heading into the Summer Split. 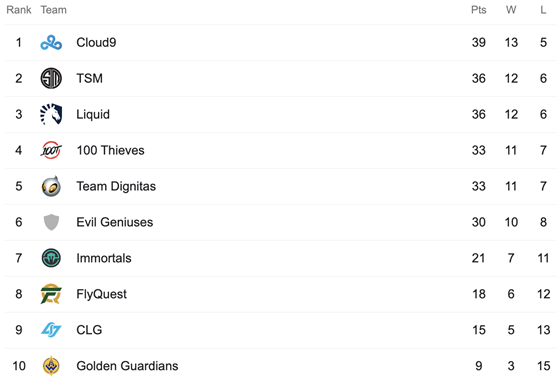 Namely, Dignitas is in the upper half of the regular season standings. Not only that, but they actually share the third highest win-loss record with 100 Thieves - a team that many analysts had in the top three spots. For a team that’s composed of three rookies and two veterans who haven’t looked their best in awhile - I don’t think anyone saw this coming. This begs the question: how much have these players improved from last year, and are they deserving of their Mid-Season Showdown (MSS) playoff spot? 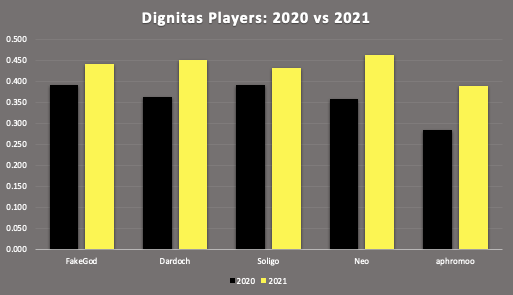 The 2020 versus 2021 performance of the Dignitas players is rather impressive. Between all the Dignitas players, they have, approximately, a 21.5% performance increase on average based on POWR rating scores. Aphromoo holds the crown of having the largest delta at +36.2%, which is even more impressive when considering that 2020 was his redemption split after critics were questioning his dedication and skill level during his time on 100 Thieves. Even Dardoch had a stellar split when taking into consideration his tragic 2020 season with getting removed from Team SoloMid after only one split, and then having to battle Akaadian for the starting jungle position on that iteration of Dignitas. Dardoch’s version of the redemption arc has netted him the highest POWR rating amongst his teammates, and rightfully so given his jungle control and massive (yet unorthodox) champion pool. Arguably, even more impressive, though, are the rookies of this roster. Their 2020 POWR ratings were based off of Academy games, which we would expect to be higher than their LCS performance numbers since the competition has only improved with the jump to the big leagues. However, FakeGod and Soligo both have over a 10% increase in rating, while Neo has seen a massive 28.9% increase. FakeGod has also tied for the third most Player of the Game awards with PowerOfEvil and Alphari at five awards each. Dignitas’ gamble on these three rookies has paid off well. So we can conclude that each individual Dignitas player has improved significantly since 2020, but how do they stack up against the rest of the league, and specifically against their record-sharing opponents: 100 Thieves? 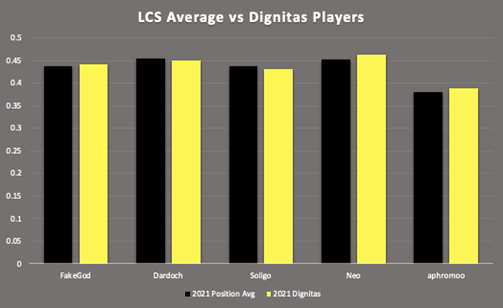 Based on the graph depicting LCS average POWR rating by position versus the respective Dignitas players, It seems that the roster would stack up somewhere in the middle of the pack given that they perform at the average LCS performance. Lo and behold, the middle is exactly where Dignitas landed due to their losing record against 100 Thieves. 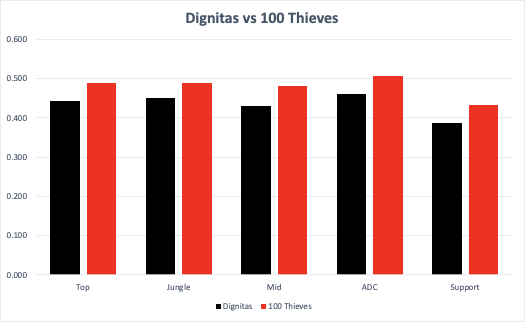 Despite Dignitas’ unexpected record in the Spring Split, they were still out matched in each position against their record-sharer, 100 Thieves. However, they’ve more than proved that their team is well deserving of the 5th seed and that maybe this roster is greater than the sum of its parts. 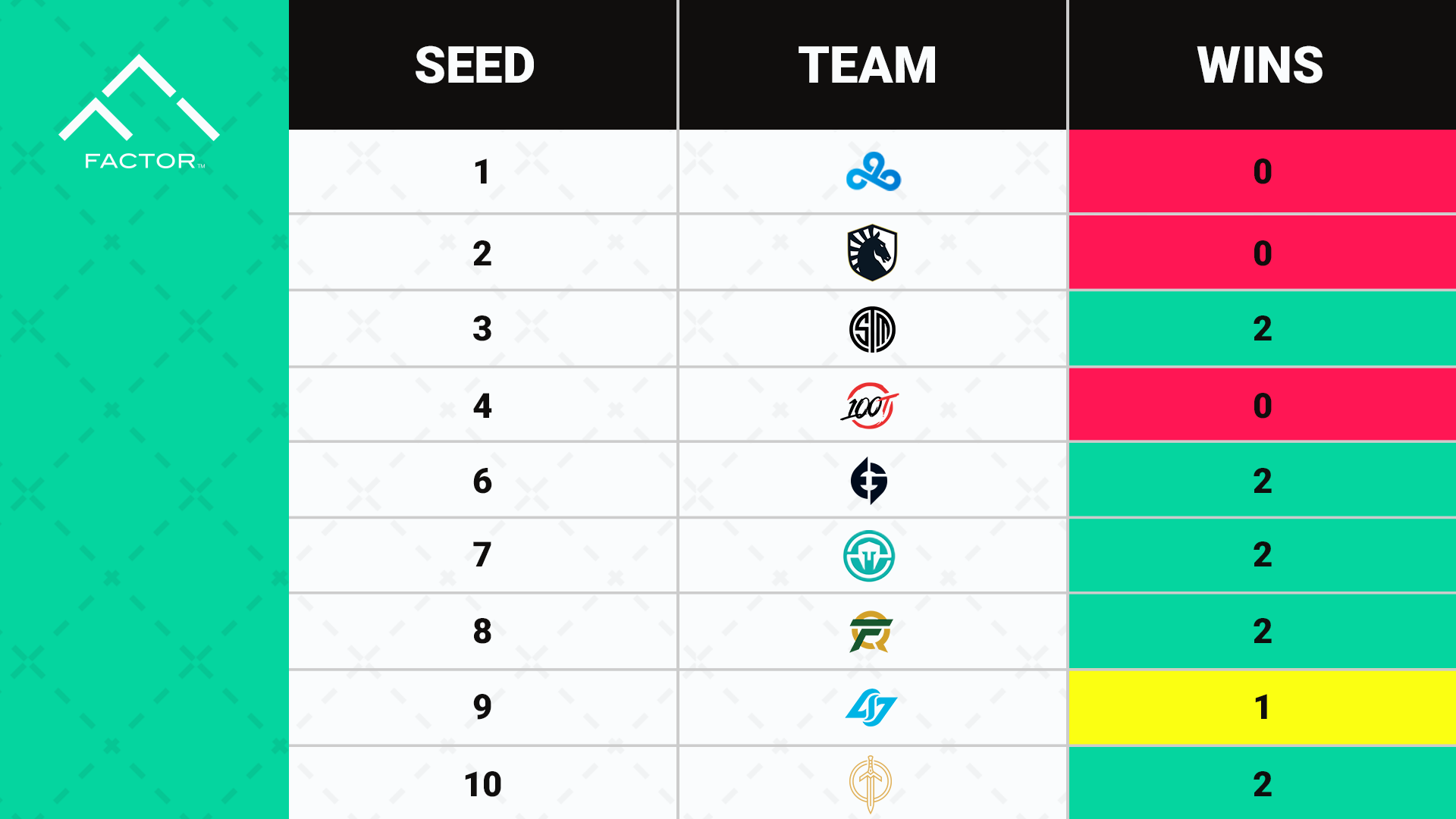 They have only dropped one game against a lower-half team, but that was against the true Counter Logic Gaming roster with Pobelter and Broxah. This shows that they’re, at least, consistent against weaker teams. Against all odds - they’ve also managed to defeat the third seed, Team SoloMid, not once, but twice, despite a similar difference in average POWR rating as was the case against 100 Thieves. 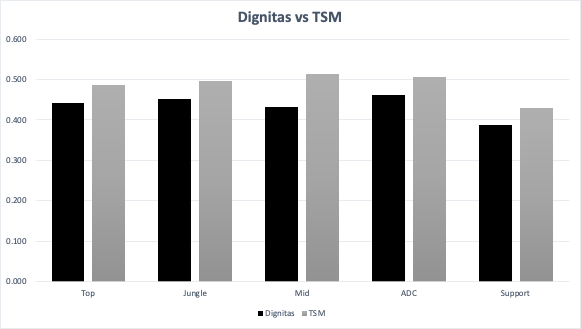 Maybe it’s attributed to one play style being stronger than the other, but regardless - even Dignitas can match up against an LCS champion contender under the right circumstances. This team has been a very fun team to watch and a wonderful surprise to the split. It will be interesting to keep an eye on them now that CLG is back in the mix at full power - a single game could shift a team’s placements by quite a bit given how close first to sixth place were after all. Any additional surprises that result in better competition in the LCS is more than welcome to present itself in the Summer split.