In this piece, my goal is to teach you how incentives of pro players and teams affect their decision making in draft and strategies. It’s an ambitious trek, spanning probability, behavioral economics, and risk analysis, but if you’ll stick along, I do believe it’s a rewarding lens to view teams through.

Every time I see a discussion on safety picks or bold moves, this is what comes to mind for me.

The expected value of a scenario is the sum of all potential payouts multiplied by their corresponding probabilities. If we were to bet $1 on a coin toss being heads, we would know that the 50% chance of heads earns us an extra $1 (shown as $2 because we are receiving back our initial bet), and the 50% chance of tails loses us $1 (shown as $0 because we’re walking away with nothing). 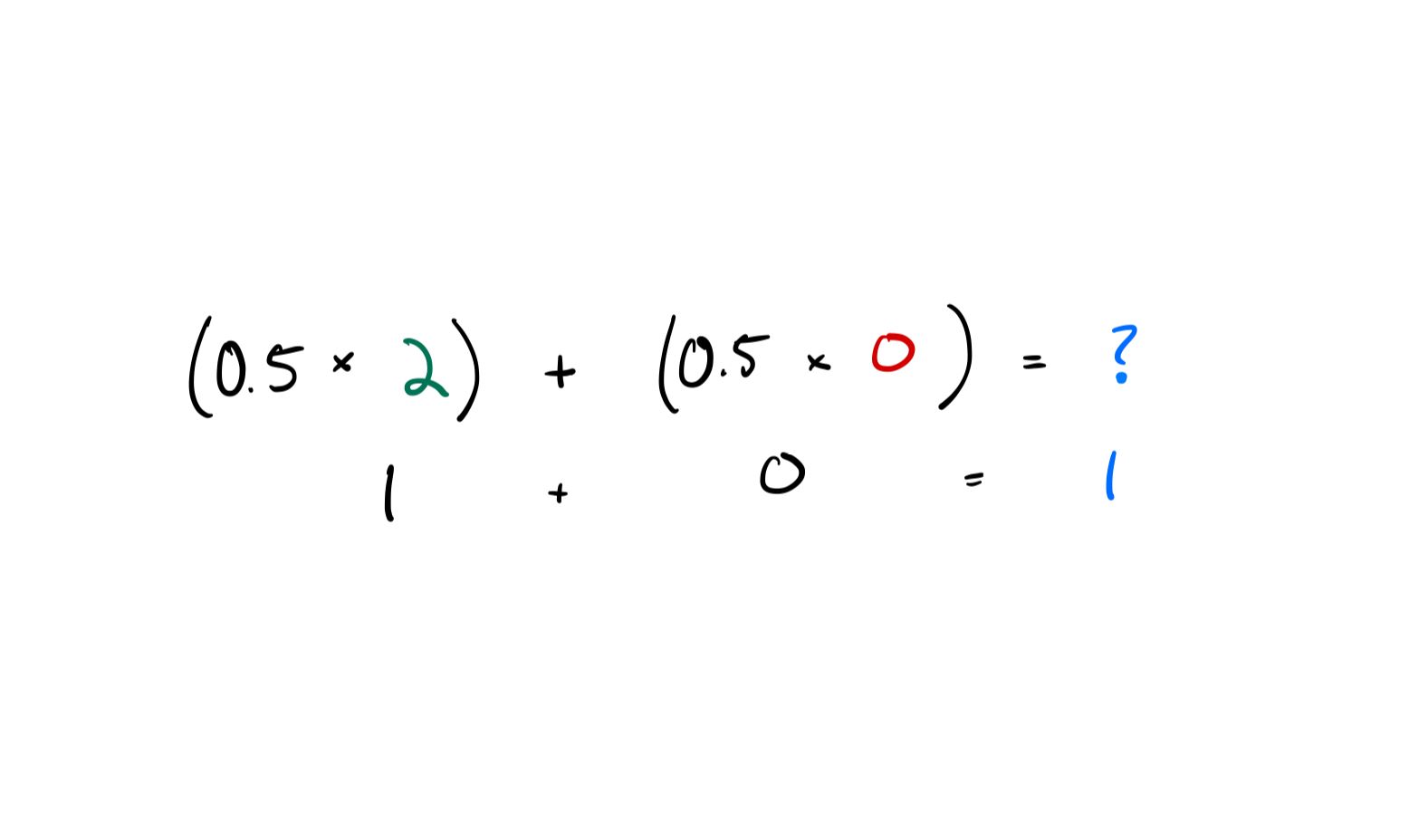 Although a cold-hearted statistician may look at this unamused (you put a dollar in, and you’re on average going to get a dollar out), people don’t value upside and downside risk evenly. Most people weigh downside risk more than they do upside.

This is where we get into utility. Utility is this abstract concept of whatever you want. I implore you to go scour the Wikipedia page if that’s not a satisfactory definition, but just get this: the payout of a scenario is not equivalent to the utility that someone gets from it.

Suppose for example you had exactly $3,000 in your bank account, and we were to bet again on that single coin toss. You would either walk away with $6,000 or $0. How do you feel about that?

This is no longer the same calculation because there are consequences. Yes, the expected value per dollar remains one dollar, but I’m certain you’re facing terrible consequences if you lose all of your money. Maybe you get evicted. Maybe you have to skip meals. $6,000 might get you a new 3090ti and Secretlab gaming chair, but the utility of those does not exceed the pain of eviction or hunger. 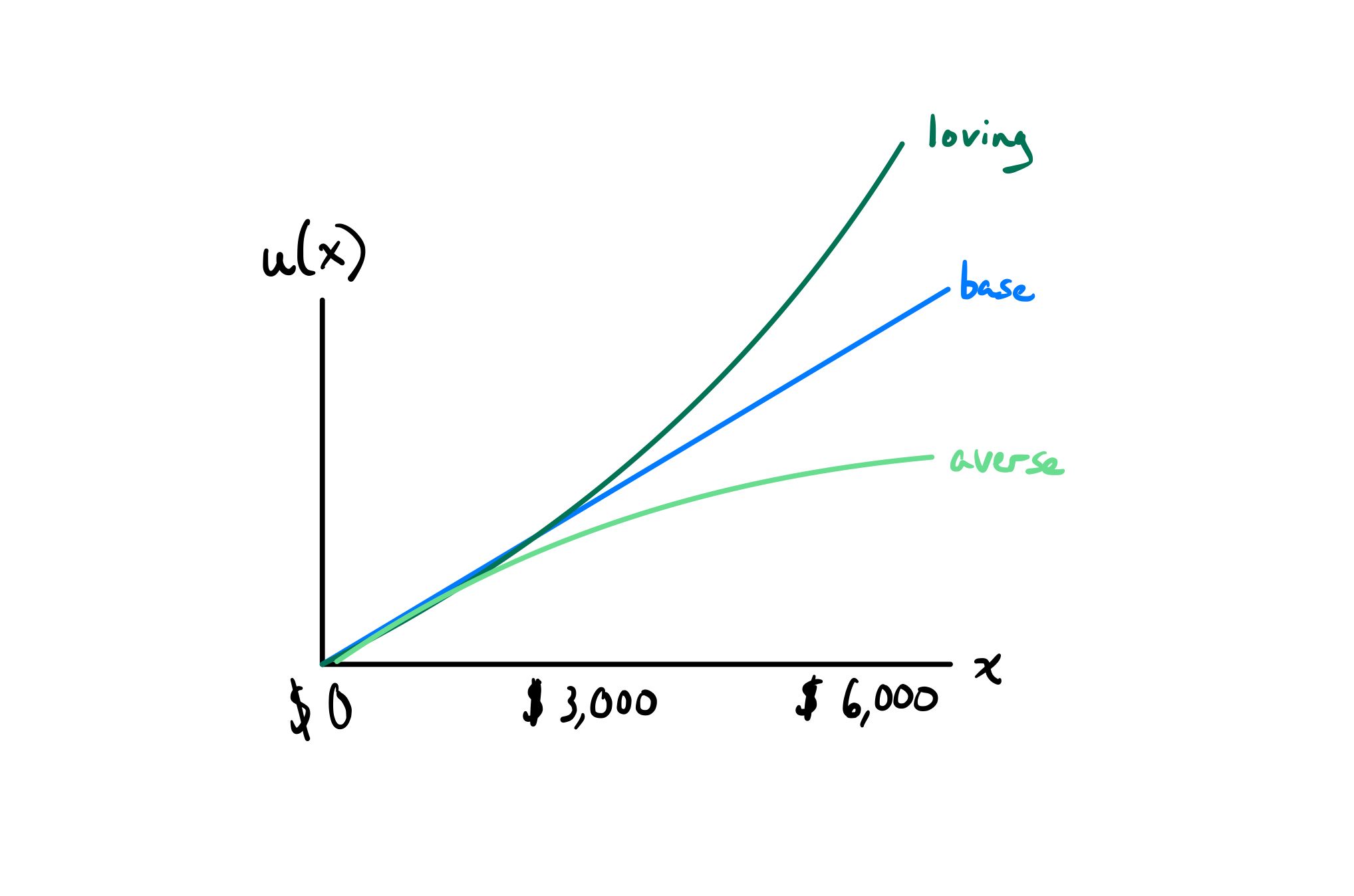 Imagine you are an average pro player. Suppose we were to sort every one of your best and worst performances possible. On any given day, you don’t know if you’re going to pop off or get clapped based on your own input. What we can do is map the relationship between your input p and the likely outcome P given some kind of champion or strategy. Let’s take one of the most tried and true champs - Ashe. 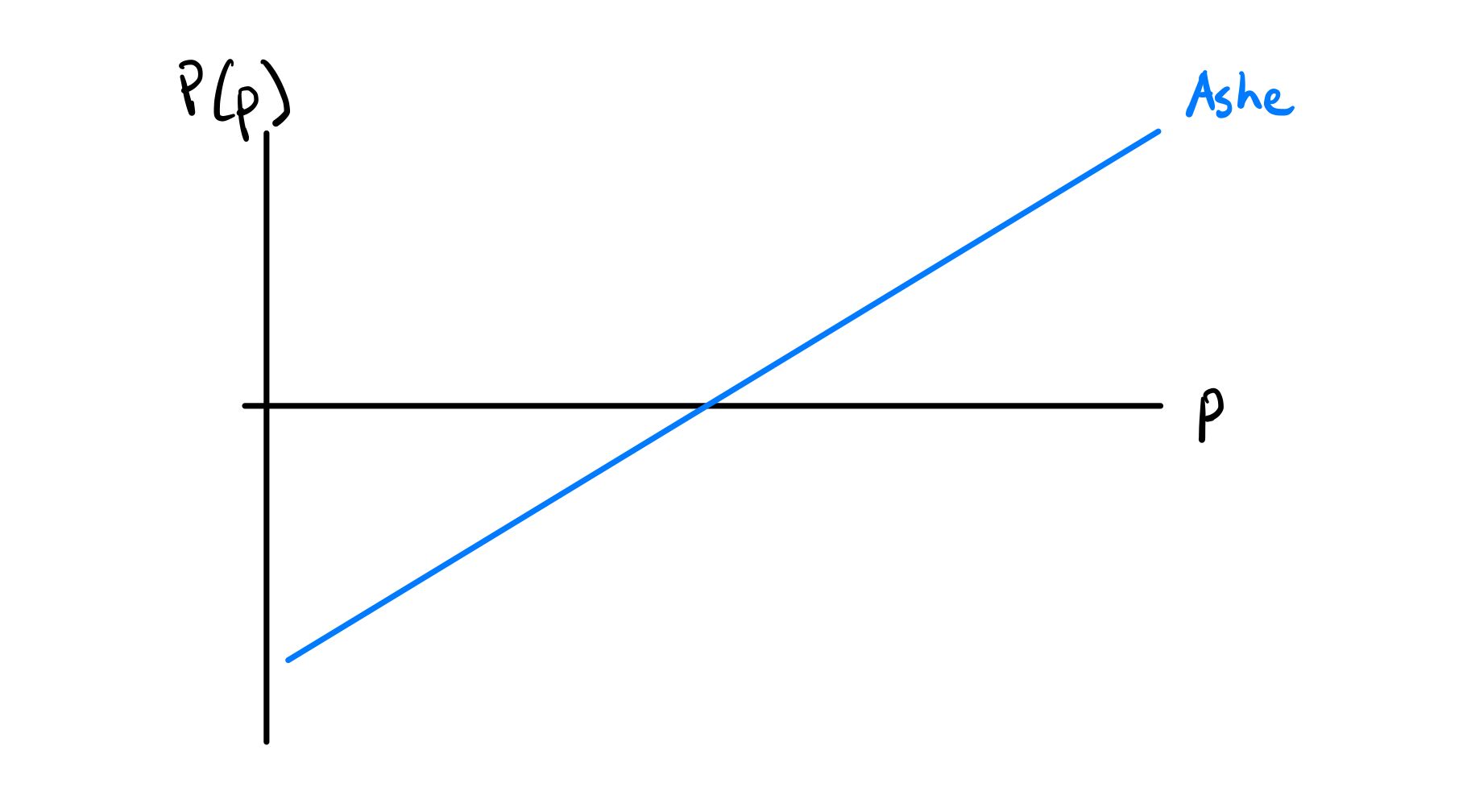 We don’t need specific numbers to show what we’re trying to achieve here (this article specifically leaves them out to not get bogged down in numbers). What you can see is that on your worst days, your outcome performance is low, and on your best days, your outcome performance is higher. For every day in between, you perform somewhere in the middle.

Ashe is notably bland. She sits at almost a perpetual 50% win rate, and she’s always pretty useful even if you’re not popping off. Her vision, slows, and stun are great even if she doesn’t get the pentas of Samira.

If we integrate across this function (adding the areas above the x-axis and subtracting the areas below the x-axis), Ashe can be characterized as rather neutral. The highs and lows cancel out. 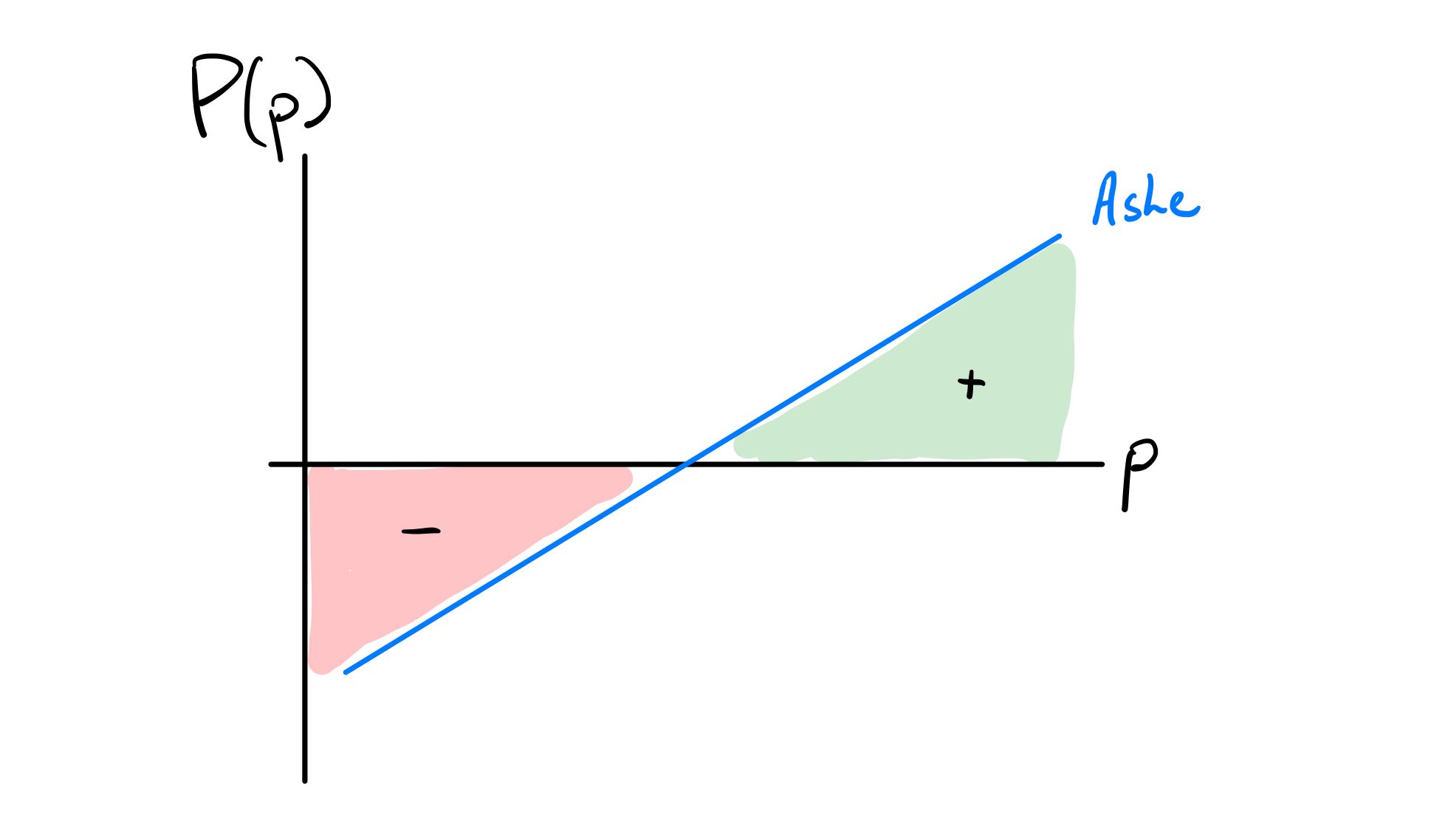 What’s interesting is when we map this graph to a utility function. If we say there is some relationship between our outcome performance P and our utility u, it would probably look something like this. 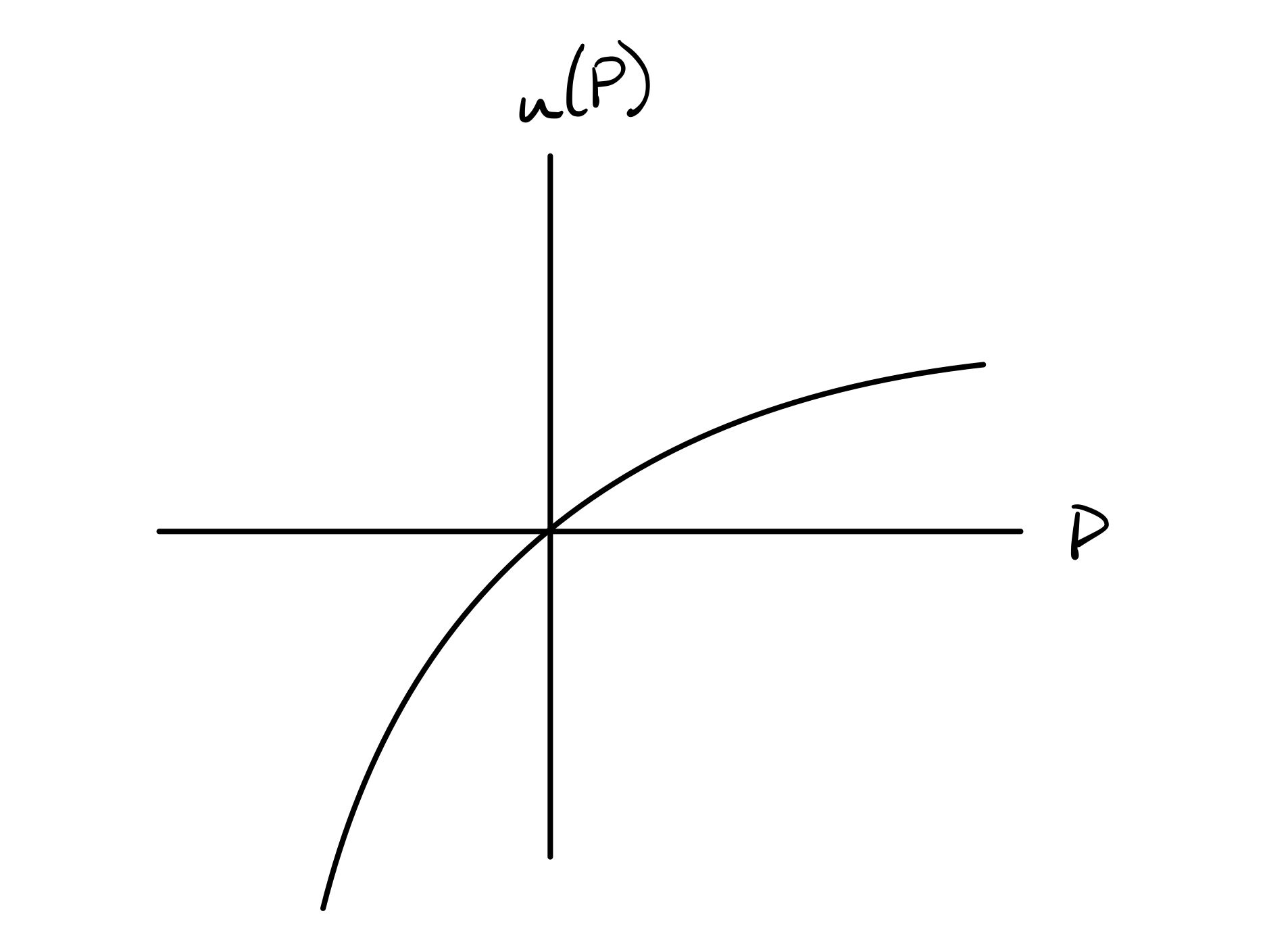 This comes from our risk aversion stated earlier. If you underperform not just a little but by a lot, then you have serious consequences as a pro player. At the very least, you’re getting blamed and flamed on Twitter all week to all year. At the worst, you lose your job.

The gap between a 1:1 relationship of performance to utility can be called (as I’m coining now) the flame gap and the praise gap.

The flame gap arises from all the additional negative consequences of a poor performance outside of losing the match itself. The internet is ruthless, and job security isn’t the best in pro sports. The praise gap arises from diminishing returns (if you have an objection to this, I will address it later). 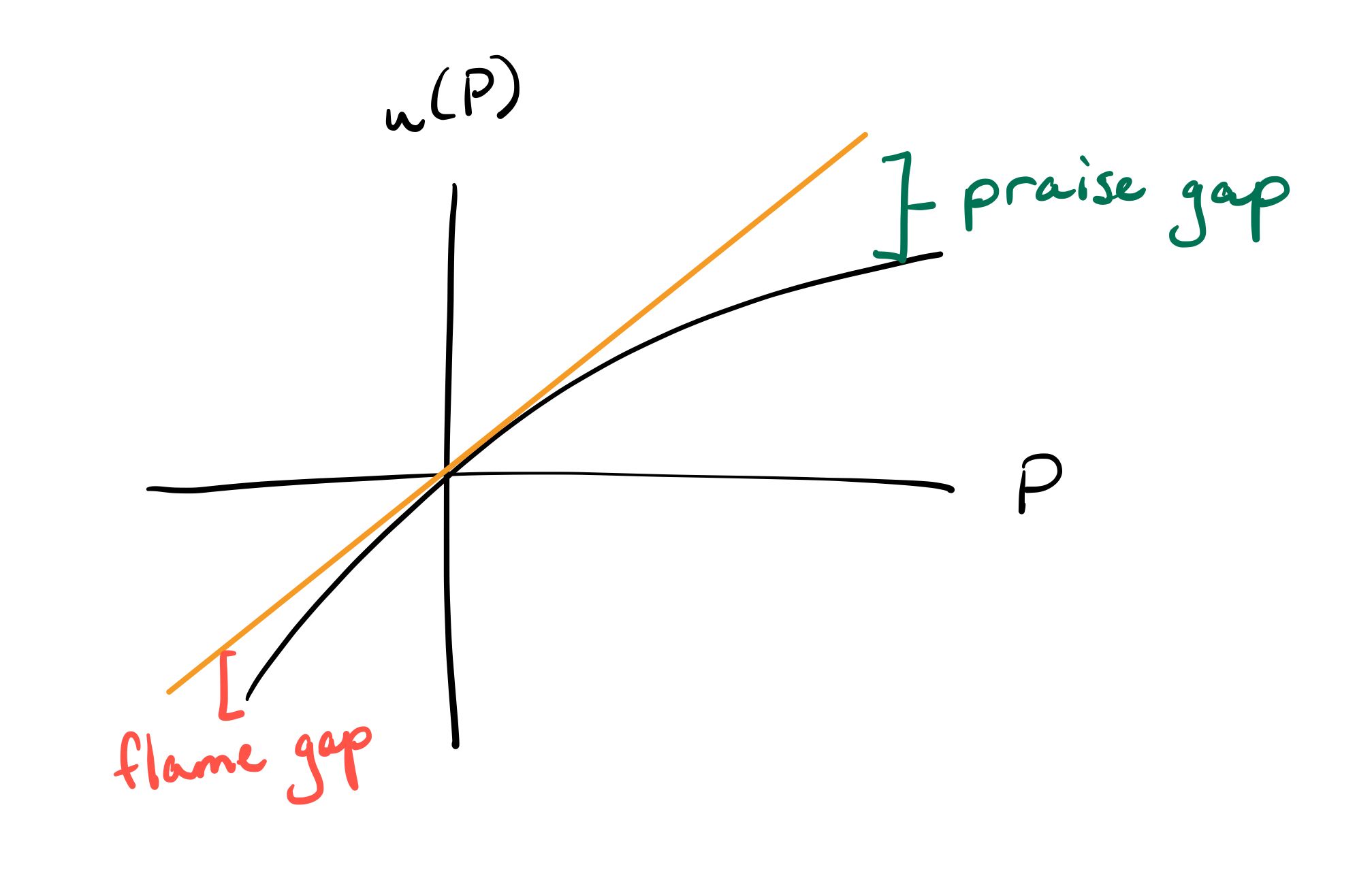 We can now compose our two functions. Composing is when you map the output from one function to the input of another, giving us a layered relationship. By plugging the output of our performance line into our utility curve, we are bending that line to show how our input performance relates to our utility. 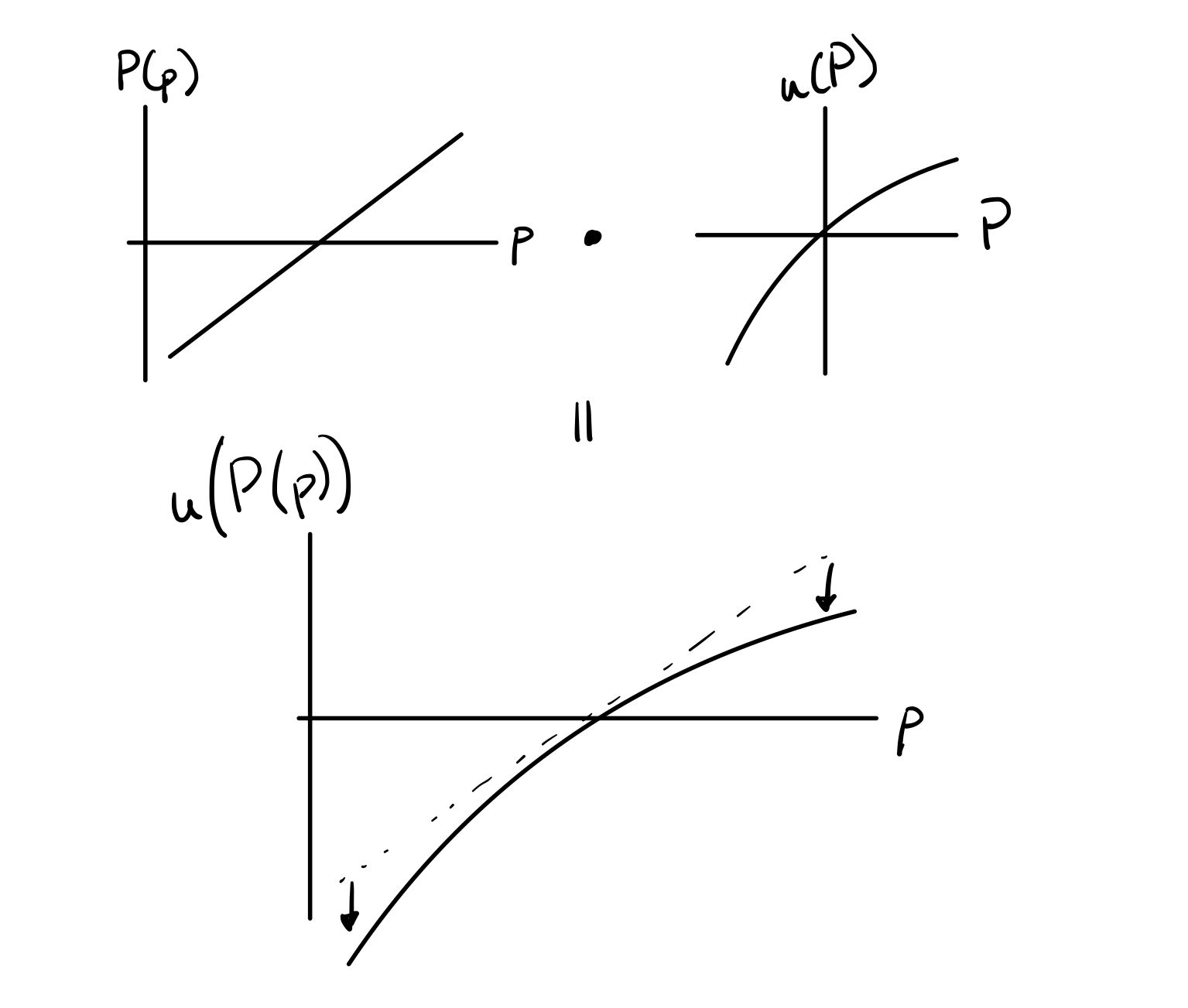 Going back to our Ashe example, the bend in the curve that arises from our risk aversion now takes what was once an evenly split area under the curve and weighs the downside risk far more. 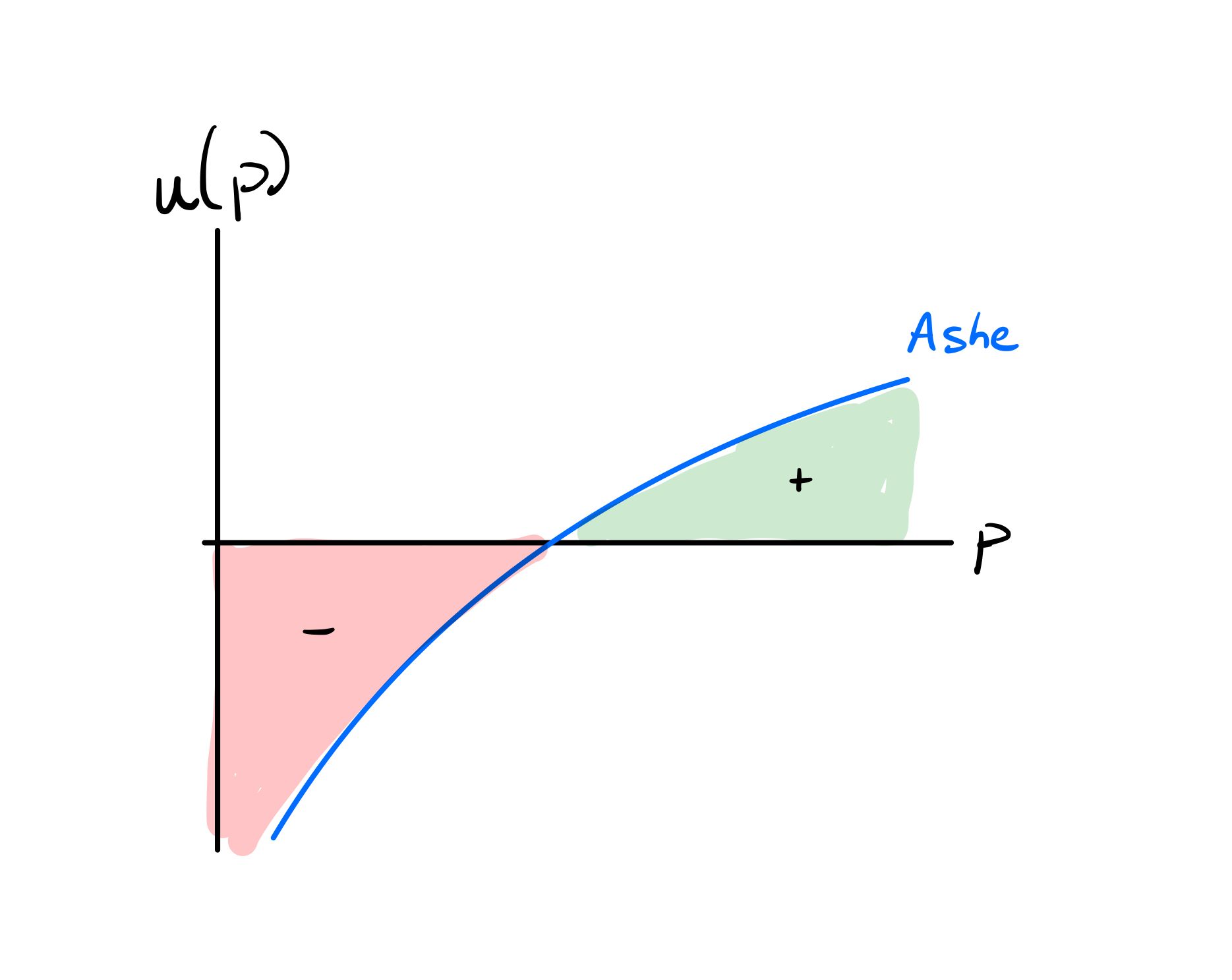 You might say, “In that case, this player shouldn’t pick Ashe if the expected utility is so low,” but we don’t make decisions in a vacuum. It’s about whether the alternatives are any better. Suppose we were to choose a different champion like Draven, who is feast or famine.

For this player, when you’re risk averse, the negative outcome of underperformance greatly outweighs the highs of popping off. Even if two champions have equal win rate, the lower risk champion is more likely to be selected.

Poor Choices Due to Risk Aversion

Risk aversion can get in the way of us finding the best strategies for success. It’s understandable that a player considers the negative outcomes of underperformance, but if all we were to care about was getting a W, we might choose different methods.

Suppose there were to be some champion X who has a higher average win rate than Ashe. We can model that by having the performance line intersect the x-axis earlier. 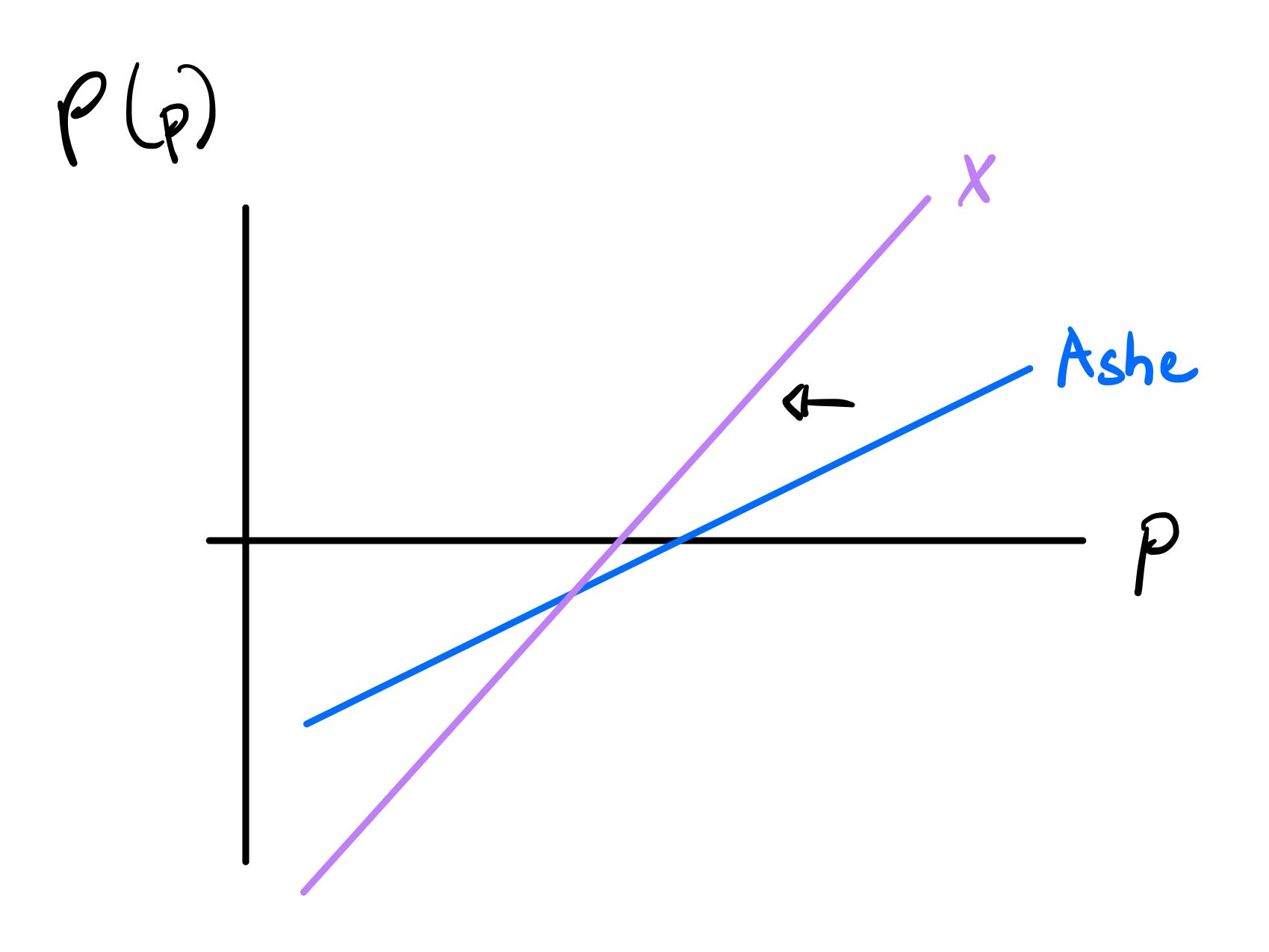 The expected value of a match on that champion is therefore greater. However, this champion also comes with some of that feast or famine risk we saw in Draven. How does that affect the player’s utility curve?

What shows the X having a clear lead in outcome performance becomes either equal in utility or still falls behind Ashe. The gains we have of the higher winrate in most circumstances are still offset by the greater downside if we underperform. This shows that risk aversion can fog our judgment in respect to choosing winning strategies.

The reason I chose this archetype of an average, abstract pro player is that every player is somehow unique. They have champions they know and love, and they oftentimes can perform above average on that champion.

What I’m not saying is that players can’t have specialties. If you can seriously over perform on a champ, then have at it.

However, what I am saying is that we should take a look at the champions we avoid who have promise but seem risky.

This is much of what defines LS as a coach and analyst. He isn’t an omniscient mathematician who can perfectly calculate every scenario. Instead, he feels little to no risk aversion. In an individual match, you can look like a fool, but across the arc of your decisions, you are more likely to make better ones.

If we truly care about the competitive development of players, teams, and coaches, there are two things we can do. One is to reduce the flame gap. If we abstain from dragging players and coaches for bold picks that don’t pan out, we can make significant headway on the overweighting of negative outcomes. That alone would broaden the options of champions and strategies teams would be interested in trying.

The second is to reduce the praise gap. If someone performs well, we should applaud it as such. Here I don’t think we are missing much. I regularly see chatter and buzz for bold moves like EG's Game 4 Bard pick for Vulcan vs TL. All that’s left is improving the fandom broadly and raising optimism for Worlds.

If we really wanted North America to win, we might be well served in trying to flip our risk aversion into risk loving. Our teams are good, but over a decade of no Worlds trophy suggests we should try something different.

My personal hot take is that in games of skill where you believe you are outclassed, the best thing you can do is create as many coin flips as possible. As such, I believe a shot at victory may only arise if we take on sufficient risk. Is this a wild statement that many coaches and players would object to? Yes, but they don’t have a graph, and I do. 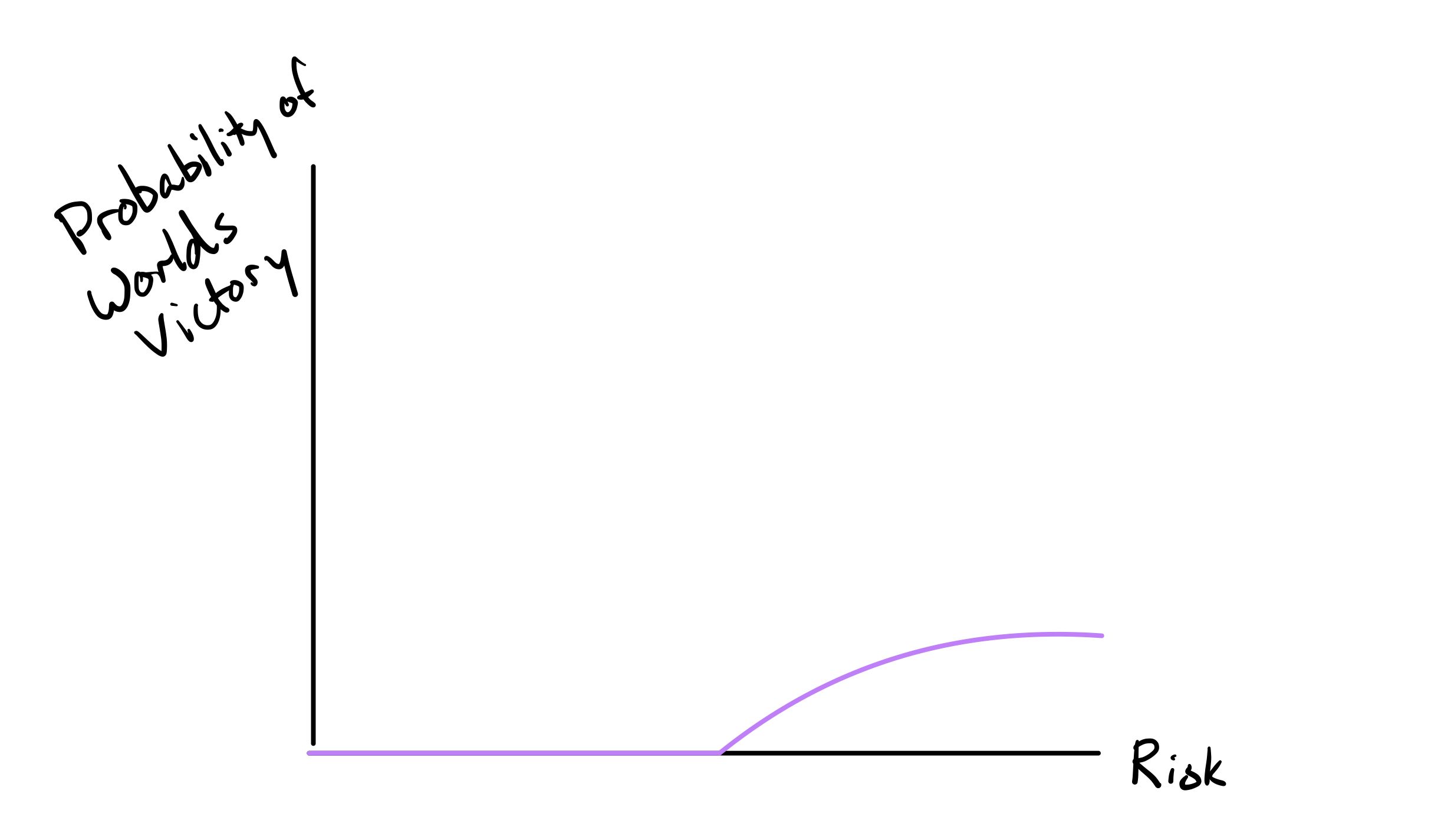 There’s that misappropriated quote of “insanity is doing the same thing over and over, expecting different results” which doesn’t resonate too much for me as a statistician. I recognize that nearly everything is probabilistic. However, based on our current historical data, we would be well served to try something new.

I believe our best shot is a calculated Clown Fiesta.

Who Will Win Worlds 2022? Our Experts React to Factor's model