Bjergsen and PowerOfEvil used to face off in League of Legends esports competitions. Now they both represent the same team, TSM. But who’s the better mid-laner?

When one great competitor steps down, another must emerge. And TSM knew it needed a warrior.

Since launching in 2009, TSM (formerly Team SoloMid) has showcased excellent mid laners, including the now-retired Robin “FeedFest” Banks and Andy "Reginald" Dinh, who has gone from Karthus to owner. These two brought the team into formation and competitive play, and many consider Reginald’s 2011 Gragas pentakill as the first in competitive League of Legends.

But from 2013 to 2020, the mid lane was owned by Søren “Bjergsen” Bjerg. After his retirement at the end of last year, TSM brought on its next great mid, Tristan “PowerOfEvil'' Schrage. The two have similar backgrounds and stellar careers, having both moved from the European LEC to the North American LCS. But the similarities don’t end there. Another factor they have in common is that they’ve both won big with TSM.

Bjergsen brought TSM to multiple playoffs, appearances at world competitions, and received numerous regional awards in his eight seasons. PowerOfEvil’s first season on TSM saw him lead the team to a second-place finish in the Spring Split and third place at the Mid-Season Showdown.

But who made a bigger impact on the team?

A stiff competition...or is it?

Numbers don’t lie. But they don’t always tell the full story. While many fans have always considered these two all-stars neck and neck, one clearly comes out on top.

The highest POWR rating that POE has scored while in the United States is 84. He earned this stat while playing Syndra, going hard against Evil Geniuses in a best of five.

Bjergsen, on the other hand, earned his highest POWR rating at 71 in 2020. He blasted into this number while playing Sett against GG Esports in 2020.

In fact, when it comes to raw POWR, Bjergsen has 30 matches ahead of POE. But the game is more competitive than it was. It’s POE who leads when accounting for scaled POWR (stacked against all regions playing at that time).

The reality is that the team performed better while Bjergsen was on it—they won more matches, and Bjergsen’s high POWR rating is a reflection of his overall strength. It seems, though, that the game—and LCS—was easier for TSM to dominate. 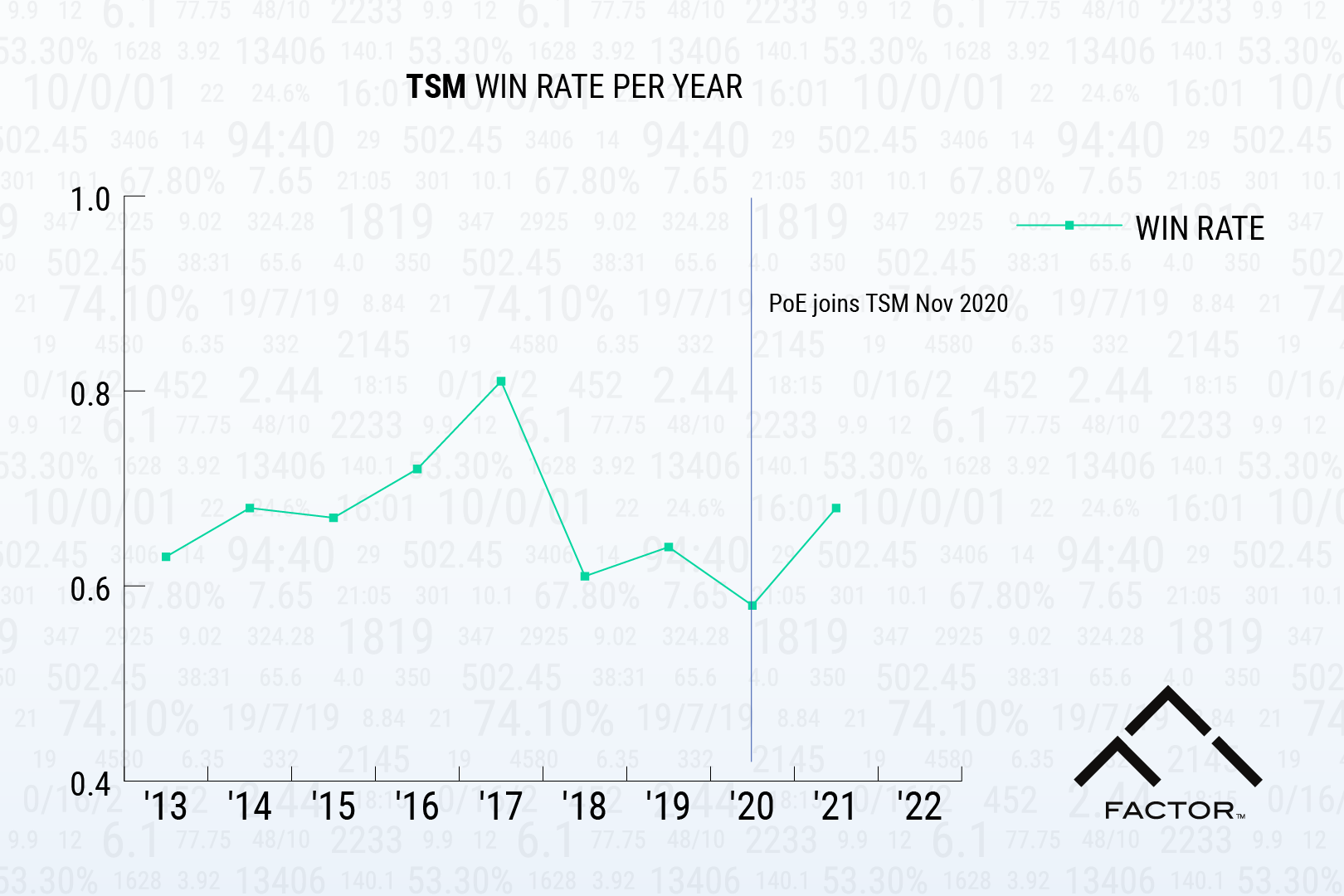 Interestingly enough, the two have even clashed on the rift themselves, with an international stage faceoff in 2015. Bjergsen, on Xerath, lost at IEM to POE’s LeBlanc, giving four deaths as POE stacked four kills in 20 minutes. In the second game, POE took first blood on Bjergsen’s Azir while playing Syndra in classic, bursty fashion.

Bjerg was damn good. And when you look at the numbers, he’s still damn good. There’s a reason this great Dane is called the “god with four wards.”

Bjergsen couldn’t compete in Season 3 of the LEC because he was too young. (Keep in mind, this was after playing for a year on the now-discontinued Netherlands team Western Wolves and the French team LDLC OL.) At one point, he was Riot’s youngest streamer. After Edward, he was the second player to ever migrate from LEC to LCS. And along with Zven, he’s one of two players to pentakill in both Europe and the U.S.

When he turned 17, he played the remainder of his brief European career for The Copenhagen Wolves, which was acquired by Sweden’s Ninjas in Pyjamas. In November 2013, Bjergsen took over for Reginald in the LCS on TSM, seven years before POE would replace him on the same team. The season he joined, they were finally able to beat Cloud9 in the playoffs in San Jose. (We don’t have POWR ratings for those games, but we’re pretty sure Bjergsen made a difference.)

In 2015, Bjergsen’s TSM won the IEM Season IX World Championship. They became the first North American team to win an international event with a Korean team competing since 2011. Bjergensen was named MVP of the event.

The superstar won four MVP awards in his time in the LCS. Whether on his pocket pick of Zilean or his timeless love Syndra, Bjergsen left massive shoes to fill.

It’s hard to beat POE’s pure, well, POWR. Given our research as of March 2021, the mid laner rated 47 on average. That puts him at the third best mid-laner in the United States. Fellow European all-star Perkz lands at 49. POE is known for a strong Orianna: baron steals, innovative builds such as Nashor’s Tooth, and surprising wins, including the 2017 upset when he beat TSM on the Misfits.

Alas, his POWR is just not as strong as Bjergsen, with one exception.

When considering POE’s scaled rating, he is soundly ahead of his predecessor. With this more nuanced formula, POE maintains 11 matches before Bjergsen appears on the charts.

POE comes to the LCS from Bad Soden, Germany, having grown up with an early affection for Warcraft III and Age of Empires 2. In 2013, the then-16-year-old broke out from solo queue onto a series of teams in his homeland, beginning with EYES ON U Europe, then Planetkey Dynamics, and ultimately landing with Unicorns of Love as the team smashed into the LEC.

He would go on to play for a slew of European teams, including replacing Bjergsen on Ninjas in Pyjamas in a timeline nearly identical to the 2020 replacement for TSM, until 2017, when he moved across the pond to spend over a year on CLG followed by FlyQuest. In November 2020, he joined TSM as Bjergsen became the team’s coach.

Expectations were high. And rightfully so. There’s no sign of POE slowing down anytime soon.

From foes to bros

Bjergsen and POE are on the same team now, as coach and mid laner respectively, and the game is quite different in 2021 than it was that fateful day in San Jose.

Given the stats, though, it looks like Bjergsen benefited from an overall less competitive time on the rift and comes out on top as far as being that sweet, sweet AP carry. But it’s the younger German who emerges as the true king of TSM mid lane.