When Goldilocks entered what she later discovered was the cottage of a family of bears, she feasted on a trio of porridge servings. The first bowl was too hot. The second, too cold. The third, just right.

Sometimes it takes a few tries to find what works. And that was certainly the case for ninja assassin Akali.

Within the first six months of League of Legends’ release, three ninja champions arrived into the game with varied kits, roles, and plans. The first two have essentially remained geared towards their original purposes:

The last of these ninja champions turned out to be an assassin dealing in hybrid damage, a mid laner who became infamous for being able to stomp out low-level players with obscene damage in the blink of an eye, then disappear into the shadows and escape. That champion was the Fist of Shadow: Akali.

Akali stood out in early League as one of its first dedicated assassins with the likes of Katarina and Kassadin, and was only the third champion to utilize the then-new energy as her resource. At a time when the mid lane was full of immobile mages like Anivia, Veigar, and Karthus, Akali dashed in and stuck to her opponents just long enough to delete them, then escaped into the shadows with little trace.

With a passive that granted magic damage on auto attacks that scaled with AP (ability power) and permanent spell vamp that scaled with AD (attack damage), Akali loved to itemize for the innate hybrid damage in her kit. Her Q was a lock-on projectile dealing magic damage and placed a mark on her target for additional effects when procceded by other abilities. Her W was a version of her invisibility shroud that slowed enemies down and provided vision. Her E hit enemies around her for high physical damage. And her ultimate allowed her to quickly dash to an enemy and deal high magic damage

She was a fairly simple, dedicated assassin who could snowball out of control and stomp games. But simplicity is a double-edged sword, and for the Fist of Shadow, it cut her more than it carried her.

Though she may have been a good fit in early League, Akali found herself starved out of competitive play when the game introduced more mobility, disruption, and champions who could outdo her at higher levels like Fizz, Diana, and Zed. Her ultimate may have allowed her to dash to opponents, but Akali’s mobility in more practical senses simply fell short of the assassins around her. Assassins already crumble when hit with hard CC (crowd control), but players essentially had to hope opponents missed their CC when Akali turned invisible. There wasn’t much of a reason to pick her over alternatives.

It didn’t help that she needed to wait for a level 6 power spike in order to have the damage to delete opponents, so as the game evolved the mid lane came to be dominated by champions with range and high mobility. Ahri, Leblanc, and Ekko were all champions who could beat her out in the early game, and she became less useful in teamfights and picking off targets as things progressed.

Akali was the epitome of a feast or famine champion. She didn’t have much of a place at the top levels of play, and there were more intensive and expressive assassins to play for fun.

A New Lease on Aka-life

Faced with waning popularity, Riot Games retuned Akali into a more interesting and impactful champion. When they finally revealed what they had cooked up, we found a new kind of ninja. She toned up, got some ink, replaced her Kama with a new chain sickle and a variety of ninja tools, and was rebranded as Akali, the Rogue Assassin. The title was well-deserved, because soon enough this assassin with no master set to work tearing through the League of Legends world.

Though DNA from her old kit certainly persisted, Akali was far more flexible after her rework. A bit too flexible, in fact. Her new passive allowed her to chase down enemies she damaged and replenish her energy quickly after an empowered auto attack. Her Q became a skillshot that healed her at full energy and shredded through minions and monsters at max rank. Her W replenished energy and made her completely untargetable by abilities, attacks, and turrets. Her E gave her an enormous amount of mobility and engage potential. Her new ultimate dealt different types of damage and special effects depending on which dash she used, stunning on the first dash and gaining missing health damage on the second.

Too Much of a Good Thing

Though fans gravitated towards this newfound complexity, it quickly backfired on Akali. She now brought a kit to the rift that was absurdly loaded and supremely dangerous in the late game with far more utility in team fights. Akali quickly became a dominating force in the mid lane, obliterating champions with little mobility and stomping teams in the late game. ADCs (attack damage carries) generally lack strong mobility options, and things were even worse when there was no such thing as Galeforce. Letting Akali loose on the bot line guaranteed kills in the hands of a competent player.

Because of this, she became a pick/ban priority for competitive play and solo queue alike, shredding through opponents if she was allowed into a match. As a result, a number of features were cut. Her numbers have been scaled up and down repeatedly, and certain perks have been diminished. Her Q’s healing is gone and no longer deals additional damage to minions and monsters at max rank. Her W no longer makes her untargetable by turret shots, and her ultimate no longer stuns or deals physical damage on its first activation. She has infamously low win rates in solo queue, partly due to her complexity and partly due to her nerfs. Despite that, she remains heavily utilized at the professional level. 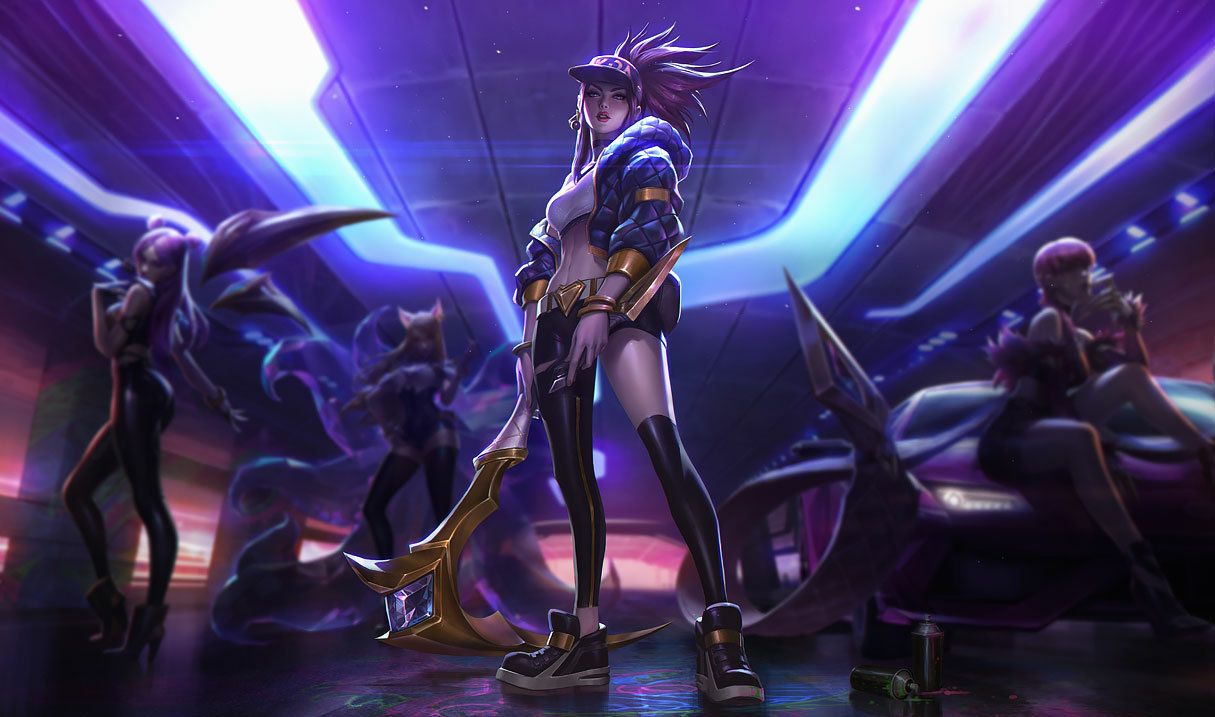 Immediately following her rework on patch 8.15, Akali’s popularity in competitive play skyrocketed. She held a whopping 91% presence in pro play around the world in patch 8.16, and was present in 80% of matches at Worlds 2018. At Worlds 2019, she appeared in 87% of matches. Future patches saw her presence dwindle, and as of the start of MSI 2021 in season 11, she’s had a nearly 19% presence around the world, most commonly showing up in the mid lane and seeing an uptick since receiving buffs in patch 11.6. Ready to spring at any chance, Akali may have finally found the right formula for measured success in League of Legends.

Akali has become a legitimate icon of the game, featured in promotional media and animated shorts. She’s even reached audiences beyond League of Legends due to her massively popular appearance in K/DA . She’s become a fixture of competitive play similar to champions like Thresh and Graves, consistently in a place of viability and a contested pick at the top level of the game.

Champions are made, not born. And now Akali is just right.