“I don't think I reached the expectations I set for myself,” [Kaori] said solemnly. “I thought we could win LCS."

100 Thieves defeated Evil Geniuses 3-2 in the penultimate match of the 2022 League Championship Series Championship, but the result of the match may not even be the most interesting development of the series. In his LCS debut on less than a week of practice, Evil Geniuses AD carry Muhammed Hasan "Kaori" Şentürk stood tall alongside support Philippe “Vulcan” Laflamme and went toe-to-toe with the veteran 100 Thieves bot lane of AD carry Victor “FBI” Huang and support Choi “huhi” Jae-hyun. Kaori’s performance throughout the series was strong for a debut in the LCS, but when you consider the circumstances, it was exceptional.

Less than a week ago Evil Geniuses starting AD carry Kyle “Danny” Sakamaki would be stepping down from the starting roster to recover from burnout and mental health fatigue.

Kaori, while a top prospect in the LCS Academy League and a clear standout on EG Academy who also boasts experience in the Turkish Championship League, was promoted to the LCS roster under emergency circumstances with only a few days to practice before the match against 100 Thieves.

While EG was already locked in for the 2022 World Championship after their last win with Danny in the lineup – a 3-2 slugfest against Team Liquid – the general impression was that the odds for EG to defend their spring LCS title were quite low against the likes of 100 Thieves, let alone a supercharged Cloud9 waiting in the finals.

EG may have lost the series, but Kaori’s performance was about as good as one could ask of a player put into his position. The Turkish sharpshooter provided the lion’s share of damage in EG’s two wins in the series with impressive performances on Lucian, and on Zeri in game 2 and Sivir in the final two games, he showed impressive positioning in teamfights from behind in gold, doing his damndest to keep his squad in the game.

Kaori finished the series with a 4.1 KDA and 645 damage per minute – the most of any player on either team.

Despite his performance, Kaori expressed disappointment in a press conference with Evil Geniuses following their loss to 100 Thieves, stating that he felt that if he played better, his team could have won the series and then some. “I don't think I reached the expectations I set for myself,” the AD carry said solemnly. “I thought we could win LCS."

Vulcan, ever the dutiful support, offered a different perspective on the result of the series in context of Kaori’s performance later on in the press conference. “I don't think I played very well individually. I think, as a team, we had good moments and I thought Kaori played very well. Even though he will say he played badly, I think he played well,” said Vulcan.

We need to get more reps in with Kaori. It's not easy to jump into playoffs after not even 10 scrims. We'll have to get more on the same page with him.” 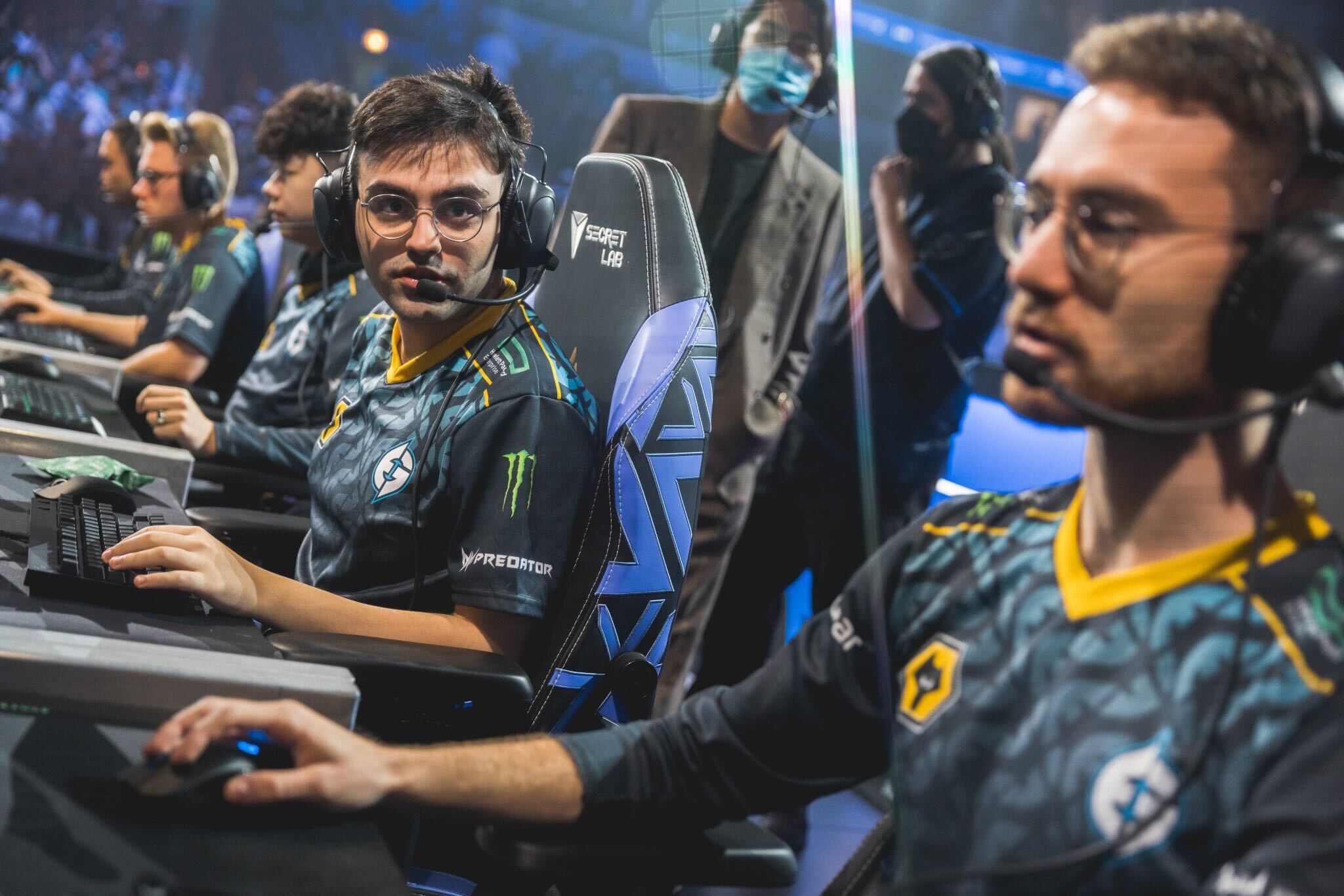 It looks like Evil Geniuses will be getting those reps in practice before heading to compete in the Play In of the 2022 World Championship in Mexico City – head coach Han "Rigby" Earl all but confirmed that as long as Danny was taking time away from the team, they are planning to continue with Kaori as the starter. The rest of EG’s starting roster has far more experience playing with Danny, but if Kaori is to continue to start in his place for the foreseeable future, it could be a boon to EG depending on how the competitive meta shapes up for Worlds.

“Honestly, when we're with Danny, he has his exceptional champions that he plays really well, so we try to adjust to his preference,” Rigby explained. “But with Kaori, we were actually going for what we think is right generally – not just in NA, but in all regions – so it's a pretty exciting experience for me.”

While 100 Thieves and Cloud9 duke it out tomorrow in the United Center for a domestic title, EG will have full focus on retooling their roster with Kaori in the starting AD carry position as they look toward the Worlds 2022 Play In.